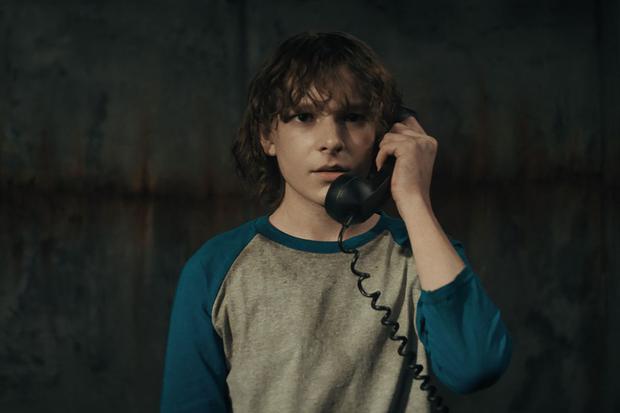 Although Ethan Hawke, who recently He was the villain in “Moon Knight”had promised never again to work in a horror movie; Scott Derrickson, director of “The Black Phone”, managed to convince the actor of “Before Dawn” to participate in this proposal that pays homage to the classics of Stanley Kubrick.

The director of this feature film has a lot of experience in this genrebecause it has been the mastermind behind famous representatives of terror such as “The Exorcism of Emily Rose”, “Sinister” and “Deliver us from evil”.

“The black telephone”, the Spanish translation of the title, not only has Ethan Hawke as leadbut also to Mason Thames and Madeleine McGraw.

WHAT IS “THE BLACK PHONE” ABOUT?

“The Black Phone” tells the story of Finney, a 13-year-old boy who is kidnapped by “The Raptor”a serial killer who wears creepy masks and has been terrorizing the citizens of his local town.

The child is locked in a dark room soundproof where you find an old phone with which you can communicate with the victims of the killer. These will play vital to be able to free themselves from captivity and escape from a bloody end. The funny thing is that the phone should not workbecause the cables are cut.

Also, from the outside, her sister Gwen experiences psychic dreams They give you clues to find it.

IS “THE BLACK PHONE” BASED ON A TRUE STORY?

The events that are developing in “The Black Phone” take place in 1978 in a suburb from the city of Colorado, United States. Around that time, figures began to emerge that terrified the country like Charles Manson, Ted Bundy, David Berkowitz (Son of Sam), Richard Ramirez, among others.

In this way, “The Raptor” is a combination of several of these disturbed characters who have been remembered in history for all the wrong reasons. For example, he somewhat resembles John Wayne Gacy, who sometimes played a magician or a clown. Also, his victims were usually malefrom teenagers to young adults, whom he buried under his own house.

On the other hand, Scott Derrickson commented that he wanted the environment to reflect his own childhood as well.

“I grew up in a neighborhood like the one in the movie when I was 12 years old, a working class place full of bullies. I was the youngest of 13 children on the block, there was violence in my house, there was violence in the neighborhood. They were realities that I dealt with and with which children my age also dealt.”, explained the director of “Doctor Strange” to SensaCinema.

WHY DID ETHAN HAWKE NOT WANT TO ACT IN ANOTHER HORROR MOVIE?

The actor who is responsible for giving life to the serial killer “The Raptor” is Ethan Hawke, known for his role in the romance trilogy “Before Sunrise.” Additionally, he has been in popular titles such as “Dead Poets Society”, “Boyhood: Moments in a Life” and the recent Nordic drama “The Northman”.

According to the director of “The Black Phone”, Hawke did not want to accept the role because he did not like to play villains unless they are legendary characters. like the one Jack Nicholson did in “The Shining”.

“When I called him to tell him about the script I said maybe he wouldn’t be interested because he’s a sadistic child killer who wears a mask and we wouldn’t see his face.Derrickson commented. “I gave him the script, went to sleep, and when I woke up, I had a voicemail on my phone and it was Ethan, in the voice he uses in the movie, reciting one of the lines from the script. And it was with that horrible message that I knew I had convinced him”.

WHEN DOES “THE BLACK PHONE” PREMIERE?

The movie “The BlackPhone” is scheduled to be released in the United States on June 24 this year.

However, it had already been released on September 25, 2021 at the “Fantastic Fest”, where it received very positive reviews.

What is “The Black Phone”, Ethan Hawke’s horror movie, about?