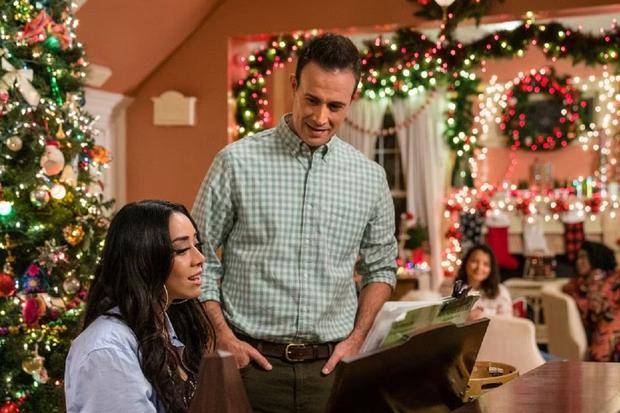 Directed by Gabriela Tagliavini with a script written by Jennifer C. Stetson and Paco Farias, “Christmas with you” (“Christmas with You” in its original language) is a Netflix Christmas Rom-Com that follows a pop singer as she finds more than just inspiration thanks to a young fan’s desire.

just as Lindsay Lohan returned to the movies with “Christmas coup”, Freddie Prince Jr.remembered for his participation in “She’s All That”, the “Scooby-Doo” franchise and “I Know What You Did Last Summer”, returns to romantic comedies with “Christmas With You”

“As nervous as he was about making movies again, he couldn’t have chosen a more beautiful film or a more perfect group to work with. They made her love this business again”, he assured whats on netflix.

WHAT IS “CHRISTMAS WITH YOU” ABOUT?

According to the official synopsis of “christmas with you”, “Feeling the exhaustion of her career, pop star Angelina escapes to fulfill the wish of a young fan in small-town New York, where she not only finds the inspiration to reinvigorate her career, but also an opportunity to find true love.”.

In an interview with Kelly Clarkson on The Kelly Clarkson ShowAimee Garcia, co-star of the Christmas movie stated: “It has all the things you love about Christmas, like heart, humor, and romance, but because it’s told from a Latino perspective, it has tequila, tamales, and a bit of Spanish. We had a Latina director, Gabby Tagliavini, and we have a Latino producer, Herman Torres, and we have Latino writers.”.

TRAILER OF “CHRISTMAS WITH YOU”

ACTORS AND CHARACTERS OF “CHRISTMAS WITH YOU”

WHEN WILL “CHRISTMAS WITH YOU” PREMIERE?

“Christmas with you” will premiere on Netflix on November 17, 2022Therefore, to see the movie starring Freddie Prinze Jr. and Aimee Garcia, all you need is a subscription to the popular streaming platform.

What is it about and how to watch “Christmas with you”, the new Netflix movie