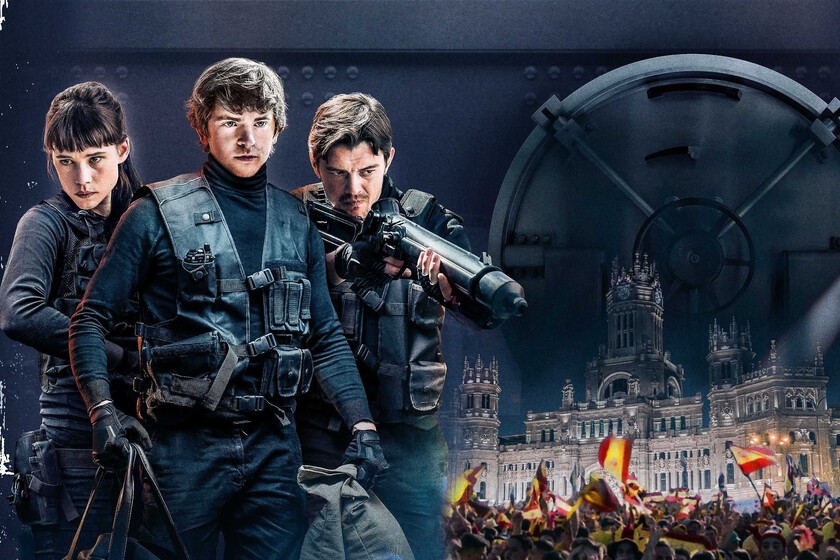 The robbery cinema lives an interesting revival with the success of many and very diverse proposals that they raise big coups and epic robberies against the backdrop of the financial crisis acting as a facilitator of the sympathies of the general public. ‘Way Down‘is a good example of the good health of the genre and especially in Spain, since it is directed by Jaume Balagueró, in his first non-documentary work far from horror or thriller.

In recent years we have had many examples, but ‘The Money Heist‘is an inescapable global phenomenon that has much in common with this new approach to the world of thieves. The specific point that plays against this film is that its theft is precisely in the Bank of Spain, the place where we have been three seasons of the Netflix phenomenon, which leads to a very difficult level of complexity equal in two hours.

If Álex Pina’s series took ideas from ‘Hidden Plan‘ (2006) the ‘One hundred years of forgiveness‘(2016), this film seems to respond to the classic robbery starting point that we have all fantasized about if we got into the shoes of thieves: plan the coup in the middle of a great Spain soccer match. This does not mean that ‘Way Down’ ends up repeating some strengths of Netflix’s success, including characters such as the head of security, who seems to replicate the idea of ​​the stale and retrograde official that reveals the tendency to mannerism of similar projects.

Balagueró recovered after the misstep of ‘Musa’

However, the film’s common places do not sit well, since it is raised from a difficult starting point; as if it were a revenge of the pirates of ‘The Fortune’, it is the members of Atlantis themselves who try to steal back the Spanish crown, which creates a confusing bed of alliances for a viewer who is not convinced only by a few familiar faces and a few screams to try to turn a notorious plunder. It’s still funny to see the other side of the story, but that foundation will create weaknesses later on.

The whole robbery is very well thought out and completed, the visual display is enviable and Balagueró has a steady hand and wide gaze to manage the geography of the game and action scenes. Although it may seem generic, ‘Way Down’ has a better thought script than it seems, full of seeds that germinate at key moments and plans that fail and are fixed with a stress management that ensures fringe-free entertainment. The international cast works perfectly and the production is remarkable.

Where the whole does not work is precisely that we are not completely on board with the characters, treated to a certain extent with a coldness somewhat alien to the viewer, whose maximum emotional connection is with the character of Liam Cunning, who alone manages to create that traction of sympathies to which he manages to drag Freddie Highmore, who does well as a clever boy oblivious to everything, and has a moment in which he brings out his perfect Spanish, creating the hook based on spontaneity.


And it is that during some moments of ‘Way Down’ the one that amuses us the most and we want to see on the screen is José Coronado, embroidering again the role of the elder gummed boss with the gaze of an eagle. An Emilio Gutiérrez Caba also works in his few scenes who gives him the reply, both two symbols of that Spain that must be unpleasant but that here are on the verge of liking us. And this is not entirely intended. There are details of dialogues that do not come together as they seem to pretend. At a certain point, Luis Tosar defines the head of security as “a former head of the anti-terrorist fight, which in Spain we know as a true son of a bitch”.

A forced syllogism and with which we should connect, but it has the rudder somewhat lukewarm and we don’t know if out of sheer clumsiness or ideological omelette. It doesn’t help either that another of the characters on the team affirms that what he regrets the most is “waking up one morning in Thailand with a transvestite”, As if the scriptwriters had returned to 1994 to leave the script to rest in the bathroom of a bachelor party. It doesn’t help either that the female character of the group is almost a prize for the engineer in an archetypal romance plot.


Again, the actress saves the furniture and her role in the plot has some details that redeem clichés, but although in the end they end up winning us, all ‘Way Down’ it lacks that element of the cinema of the recent crisis that gives us solidarity with the thieves. If Steven Soderbergh understood in ‘Luck of the Logans‘(2017) that his band of white gloves and Armani suits we did not like,’Widows‘(2018) connected us with a series of characters who needed money and Dalí’s band gives a new meaning to the song Bella Ciao, it cannot be ignored that something has happened in the world.

The key to the Red

The effects of recessions have created a social drive that calls for a balance of our precariousness and that means that the picaresque is justified, even if it is on the big screen. But convincing ourselves that it is fun to be robbed by a team of Britons made up of a wealthy Cambridge university student and the spoilers of Our Lady of Guadalupe requires more remarkable characters and that is where the group loses strength. Fortunately, the universal connection of soccer always works.

The careful replication of the epic of the iniestazo in Madrid manages to convey the inexplicable joy of a historic moment and it’s an ace up your sleeve that not many heist movies can boast about. The basic idea of ​​the feature film of combining football and thriller is very well exploited and it benefits from the fact that the vault under Cibeles is really one of the most impregnable in the world, with which the emotional aspect finally achieves its objective. In addition, there are details such as the inclusion of songs by Los Ronaldos and Sex Pistols that consolidate a contagious attitude that ends up falling on its feet.


Either way, ‘Way Down’ survives the complicated test of resemblance to ‘La casa de Papel’ And, although it does not have the almost warlike action scenes of that one, or icons such as Denver, Alicia, the professor or Berlin, it can also serve as an endorsement for the fan of the genre, since it shows that there is a Balagueró in shape that will take care of ‘Venus’, the second film of’The Fear Collection‘, in which he will adapt HP Lovecraft’s story’ Dreams in the witch’s house ‘, and if he takes up this narrative neatness and mastery of spaces, we are undoubtedly facing good news.

‘Way Down’: a nice B-side of ‘La fortuna’ and ‘La casa de papel’ to relive the epic of the iniestazo