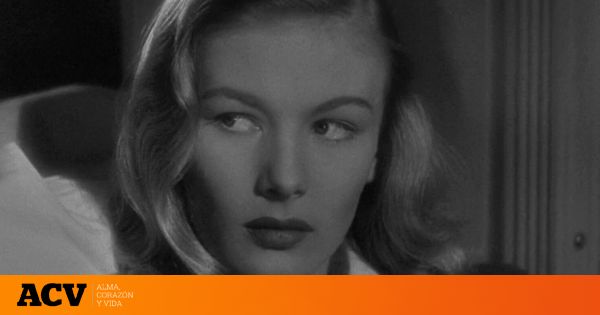 Behind the lights that illuminated the myth, the foundations of the Hollywood noir rose falling on the actresses. The so-called golden age of cinema was not so golden in their lives. Not one, not two, not three, many more are the stories of women condemned to oblivion by the industry that priced art on a large scale. The trailers on the big screen were often just fiction. That unreality was traversed by the reality of the time itself: women were to be “fatal women.” Men created for men and their fantasies. By the time this occurred, the person behind the actress ceased to exist to become their own representation.When the men turned off the light, lies and truths would spread about them, always small details that returned as an echo of certainties and not sentences decades later. , later than soon for some.

Veronica Lake’s life is a clear example of Hollywood abuse beyond Hollywood. At just 20 years old, this American actress had already been a widow, star and witch in the eyes of the public. The roles that made him famous at the time had a lot in common: an attributed fatality that quickly defined the legend. One of the symbols par excellence of this cinematographic period is the aesthetic image of the actresses who were part of it. At this point you will be thinking about the hairstyle with waves that today is still evoked so much. With him it ended and everything began for Lake.

Nineteen years and a fluke

In 1941, Lake rose to stardom with her role in the movie “I Wanted Wings.” He was 19 years old when a chance during filming gave rise to the now mythical hairstyle known as Peek-a-boo. As explained by Clare Fitzgerald on the website of ‘The vintage news’One day, while recording the tests for the film, her hair fell towards her face and fell over one of her eyes. “Everyone immediately knew that it had to become her signature style, so from that moment her stylists began to style her by letting her hair fall over her eye on purpose,” says Fitzgerald.

In this way, his appearances in the film literally crossed the screen. It happened in minute 49, that was the moment when Lake entered the field of the camera and moved his long blonde hair, a simple gesture with which they projected their future. The public across the country talked about the “Lake Look”, the press was filled with images where he wore it over and over and over again. In its November issue of that year, Life magazine devoted two pages to the film not to mention the film. The text described in detail the hairstyle of the actress until then little known. The French Cinemateque In this regard, he points out that it “detailed the number of hairs, their diameter and their length.”

The newspapers of the time thus collected a real fervor in American women for styling her hair in the Lake style. “The confirmation that her hair was (authentically) a matter of state began to be forged at that moment,” says journalist Paloma Abad in the magazine ‘Vogue’. In a few days, the young Lake was already “history of the cinema”.

A hairstyle not fit for war

However, the actress’s hair passed from being a fad to being “quite a serious matter” few months later. That same year the United States entered the Second World War and everything was traversed by it, also the Peek-a-boo. “Tens of thousands of girls were imitating his haircut, which would be fine if it weren’t for the fact that many of them started working in the arms industry.”

While the men were enlisted in the army, women had to fill the masculinized positions on the production line. Then the accidents began. Letting the hair cover half the face was not the most practical: it caused the hair of the factory workers to constantly get stuck in the machines, putting their physical integrity at risk. The solution? Let Lake change his hairstyle.

From the very Department of Defense, Paramount received a formal letter addressed to its actress of the moment. The Government thus requested Lake to change his way of combing his hair, at least until the end of the war. In 1943, the star appeared in one of the propaganda advertisements that were projected before the movies showing a new hairstyle, of course, collected. Nothing was ever what it was.

From success to nightmare

Soon, his job turned into a nightmare. He had had to shape his image to suit Hollywood entrepreneurs and, later, for the good of a country. Her worked image overshadowed her in the social psyche: the femme fatale, the suggestive blonde with a hidden face. Without that required identity, his characters no longer did so much box office. The scenic quality did not matter, the important thing was its appearance. He began to drink, his character began to change, during the fifties he barely shot a film. He tried again with the hairstyle of fame, but he was no longer twenty years old and it was of no interest to the fetish industry.

In 1967, five years before dying from hepatitis and severe kidney damage, he gave an interview to ‘The Telegraph’ to promote his autobiography. He was 45 when he explained loud and clear that her hair “was not a style”, but the way it fell naturally.

“From childhood until now, my hair continues to have this same wave. Recently, someone sent me a clip of something of mine that said something like that I was a legend. I do not understand why or how, seriously. I’ve never been anything other than myself, which is what I’ve always wanted to be“, he stressed in one of his last appearances. He died aged 50, and 50 years after his death, the Peek-a-boo is still one of the star hairstyles.

Veronica Lake’s ‘Peek-a-boo’ Story: A Hairstyle Not Fit for War