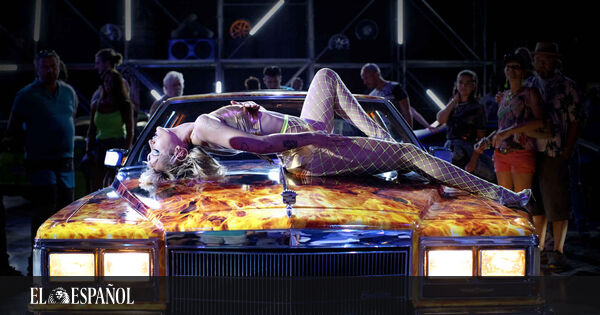 Last year it was published Scream queen, an essay where the journalist and film critic Desiree de Fez I reviewed recent horror movies from a gender perspective. It analyzed how a series of female directors had managed to speak from the cinematographic genre of female fears. Going home alone, motherhood, adolescence, machismo … Among the directors mentioned was Julia Ducournau, who debuted with Crude, a coming of age portrait wrapped in cannibalism and has now made a second film with which he has left Cannes film festival with the head upside down.

Let’s go head-on. Titanium -which arrives in theaters this Friday- is one of the wildest and most radical proposals that will be released this year -there were spectators who left the room for its first half hour during its screening at the last Cannes Festival, where La Palma won of gold-. Leave Verhoeven’s lesbian nuns on two amateurs. Ducournau provokes and offers a film that jumps without a net all the time, and in return delivers a unique experience. One leaves the room out of position, not quite knowing what he has seen. Is it a masterpiece, a joke? Let’s say what Ducournau does is create a film so free, crazy and unclassifiable that it has the label ‘cult’ written on its forehead.

But it is not an empty and cheap provocation. Behind there is a lot of crumb. A succession of themes that show that the gaze of a woman in terror offers other issues to deal with. It is convenient to tell little about Titanium. The best thing is to arrive virgin to the experience. Let’s say you tell the story of a young woman who, in order to flee, assumes a personality that is not her own, assumes an identity that does not correspond to her.

With these wickers Ducournau builds a film that has many echoes of Crash, with the sexualization of the car – the protagonist has sex with cars – but that could be defined as the best queer horror film of recent cinema. There is a brilliant and innovative reflection on the genre. Or better. About non-gender. On how gender is a social construct and a person can move from one to another. Also about what society says that defines us as a man or a woman.

There are two scenes of Titanium that delve into this idea. Two of the best movie scenes of this year, perhaps in recent years. The first is a sequence shot in which the protagonist dances on top of a car, exciting the entire cavern of males who attend the show. It seduces them. They want autographs, they think it’s an object. The other is the turning point of Titanium, when the story materializes in its true meaning The same dance, but already with its new identity. Also on top of a car, also in front of males. Now it does not have the elements that society says belong to a woman. And the result is another. Homophobia, or transphobia. Shiny.

As if this were not enough, there is also a story about the fears of motherhood, the changing body, and a relationship of salvation between the two protagonists that is as terrifying as it is beautiful. The film rides on the shoulders of the enigmatic Agathe Rousselle, but he finds in the transformed body of Vincent lindon the humanity necessary to download a film that in its half hour challenges the viewer with a succession of violent and savage scenes. Titanium it’s a step up from Ducournau as director. A very big one that confirms her as one of the most important voices of modern terror destined to do great things.