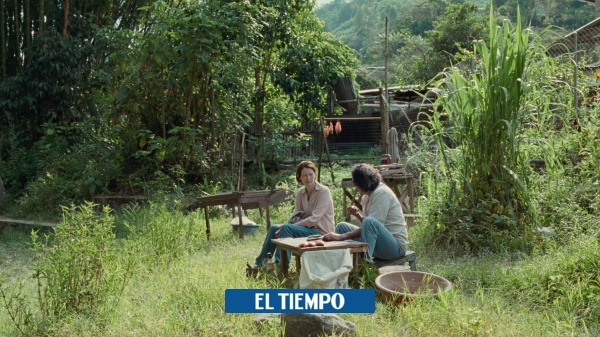 A misunderstood, a genius, a weirdo. Comments on Apichatpong Weerasethakul they vary, but are repeated every time a movie is released. After talking with the Thai director and scriptwriter, he would add his simplicity and sweetness. He is an accomplished man, but he attends the interview late due to an error in the schedules. He apologizes a thousand times. His words are slow and punctuated by smiles.

The director is in Cannes as one of the favorites to stay with the Palme d’Or thanks to ‘Memoria’, the film that he shot in Colombia, a country that was nailed in his heart.

Like a child who boasts in observing details, Apichatpong roamed this soil for almost five months. The country had dazzled him since he arrived as the main guest of the 2017 Cartagena Film Festival, where he met his friend – and now producer with her company Burning – Diana Bustamante.

(Also: They launch a trailer for ‘Memoria’, a Colombian film that competes in Cannes)

“In every place I arrived, I noticed that in Colombia people are very open, I had that feeling that they want to share their stories. I traveled to many cities, I interviewed many people, that’s how Memory began to take shape, ”he says.

The story that has him back at the world’s most important film festival was written for another of his friends: Oscar winner Tilda Swinton. With her he built Jessica, the central character of ‘Memory’, its recesses in the mind, its fears and its journey of discovery of unexpected beings and connections.

“I have to explore more because my first intention was to go to the Amazon, but I want to return because I was captivated by Bogotá and its mountains.”

Graduated as an architect and with a master’s degree in arts, the 50-year-old director is currently working on a performance about sleep. He already won La Palma in 2010 with Uncle Boonmee Remembers His Past Lives, and won the Jury Prize in 2004 with Tropical Malady.

On Thursday July 15 will be the premiere gala of Memoria and on Saturday 17 it will be known if this portrait that was shot in Bogotá and in Pijao, in Quindío, gets the grand prize at Cannes.

What did you see in Colombia to shoot your film here, what was that first connection you felt between the country and Memoria?

I remember my trip in 2017. My first impression was when I arrived in Bogotá and saw those huge mountains going from the airport to the center. I was overwhelmed. Then I started meeting people and then I became interested in understanding the political context, I was shocked, at the same time I felt that it was something very inspiring. In fact, I think I felt some sadness in the environment. That appealed to me.

How difficult was it to raise on the screen that idea of ​​the journey through the protagonist’s mind, which is the essence of the story?

At first I was very lost, because I was not at home, in Thailand, which is where I have shot movies for the last 20 years. It was new locations and challenges, but the production team made me feel at home. It was nice because cinema is a common language, I felt that the people in the production knew me, they knew about my work, I had many references. I admit that my biggest difficulty was the language, but it was something that was solved thanks to the translators and the assistants.

Tilda Swinton is an amazing actress. How did you get the point you wanted from the character you play?

Well, in principle we just jump blindly into the void and then we use instinct a lot in the development of what Jessica would be. We try to film chronologically in an attempt to understand the character. The first thing we shot was her first awakening at home, the opening scene of the movie, but the rest of the way it was kind of collaborative between her and me. It was something in motion, what you see on the screen is something else, you have the feeling that it walks, that it comes and goes, and that it responds to that connection and disconnection of the story.

Tilda Swinton is Jessica in the film.

His films move between the conscious and the unconscious, but they are also a political statement.

It is not the main topic, but there is a series of learnings behind it. When you make a film about landscapes and people, in which there is a lot of observation, you reach a point where there is no escape from where a part of that observation is going and that is that gaze.

With ‘Memory’, I was oblivious to the political situation in Colombia; I learned about it, but I feel like that was not a justification for talking about it or bringing it up. I follow my instincts a lot when trying to approach, to put on or take off.

If I had to define Memory, I would say it is …

…A trip. It’s a dream between … I don’t know what to say … it’s a dream about connections and disconnections, because it was also what I felt when I was there; sometimes I found the sync, but sometimes I felt like an alien, literally.

The director of ‘Memory’, the Thai Apichatpong Weerasethakul.

Would you shoot another movie here?

I’m dying to go back and I really miss the people in the production because I felt like family.

What was it that most captivated you about Colombia?
​
The landscapes. I have to explore more because my first intention was to go to the Amazon, but I want to return because I was captivated by Bogotá and its mountains, for example. There are many places, I still keep thinking about those wonderful and different landscapes that I knew.