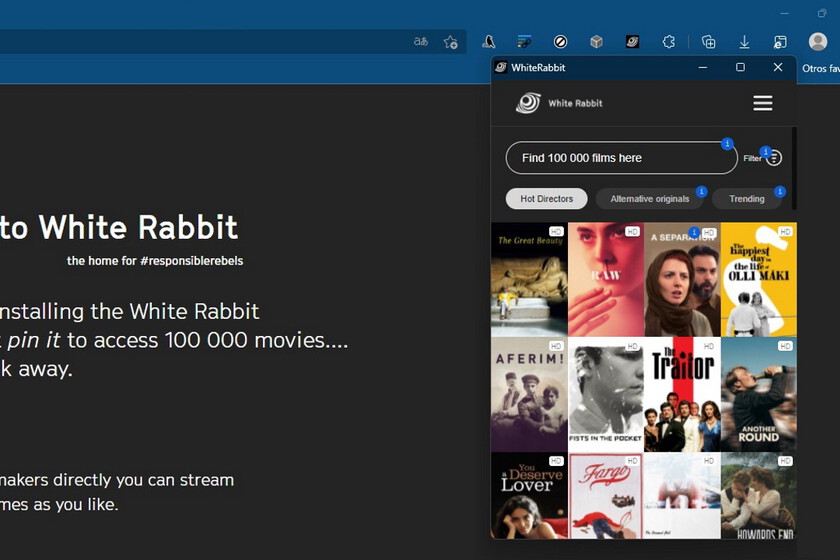 Four years ago, in the middle of the ‘boom’ of ‘things based on the blockchain’, an unknown startup at that time called White Rabbit, ‘the little leg appeared’ before the film industry promising to have the key to make users who prefer to resort to download sites pay and streaming without a license before large platforms such as Netflix or Prime Video.

Their proposal sounded good, but the fact that hardly anything tangible was known about them at this time, coupled with the number of business projects from that ‘boom’ that no longer exist, seemed to indicate that we wouldn’t know anything else about White Rabbit.

And then, last June, all of a sudden, reappeared no less than at the Cannes Film Festival, a demonstration that they had managed to win the trust of some key elements of the film industry, usually so reluctant – being soft – to hang out with “pirate websites”.

There, during a one hour talk, they were shelling before the press the details of their business project, and we found that they were now funded by the EU and the Norwegian government (through the public entities Creative Media Europe and Innovation Norway, respectively).

Broadly speaking, White Rabbit offers us –via a browser extension– access to a large movie search engine (it currently has 100,000 in its database) that provides us, in the first instance, links to the sites from which we can watch the movie in streaming with permission of the holders of the distribution rights …

…but, making a payment of two euros with the card (from the extension’s own pop-up window), we can unblock access to ‘alternative’ streaming sites, and White Rabbit itself will allow us to choose which one we prefer, and it will redirect us directly to it:

Watching the film in question on a website without a distribution license, at the suggestion of White Rabbit (and after having already made my payment).

Let’s add to that that, when we play a video on our own on an unauthorized streaming website, White Rabbit detect what we are seeing, wait a couple of minutes and pause it, showing us a pop-up window that identifies the movie and encourages us to pay another two dollars to compensate its creators:


White Rabbit interrupting my free streaming session to remind me that it knows what I’m watching, and that I can pay its creators for it.

“Paying with White Rabbit means paying filmmakers directly. Filmmakers are paid in less than a minute. We did it that way because most filmmakers today are underpaid by the streaming giants.”

“White Rabbit allows you to distribute directly to fans and pay directly for what they see […] it is an opportunity for the film industry to break away from the tech giants. Platforms are the past. Viral distribution is the future “(Ian Sharp, film producer and investor)

A change of model …

Alan R. Milligan, CEO of White Rabbit and himself immersed in the movie business, summarize with these statements to Torrent Freak the change represented by its new model, and with what supports how much for now:

“White Rabbit and its investors, including the EU and film producers, believe that the combination of P2P and Blockchain is THE opportunity to ensure technological independence through decentralized distribution, secure data ownership and direct payments from fans. to the artists. “

“With technology we can enable anyone and everyone to become a streaming platform. White Rabbit’s content recognition, combined with blockchain transaction and ownership verification, makes this opportunity a reality.”

Bertrand Faivre, of The Bureau Films, affirms that White Rabbit “solves a problem for us: that of clearly distinguishing between customers who are willing to access our movies for a fair price … and thieves“.

Behind the White Rabbit model there are also agreements with various websites that distribute movies in an unauthorized way. Is that, Unlike many other filmmakers, Milligan sees them as potential allies.:

“The film industry and piracy websites have a common cause: to reduce the dominance of the tech giants, and not just in streaming. As such, I invite all these sites to join the professionalization of the P2P streaming arena, to go on to take on a role in the film industry “


“It’s legitimate, look, these are our supports,” they say on their website. Below, logos of the EU and various production companies.

“Sometimes movies are subject to exclusivity agreements: if that’s the case, we’ll take you to the right platform. But still, there are 100,000 movies that don’t belong to the streaming giants, that can be enjoyed through from White Rabbit “.

However, it is not something that I always achieve, either for technical reasons (in the tests carried out by TorrentFreak, it did not always recognize such ‘exclusive’ films) or for lack of agreements.

And, according to Milligan, White Rabbit is aware that not all the major studios will join immediately, but he clarifies that, meanwhile, the company does not plan to benefit from the content of other.

Therefore, if someone pays money for a movie that is not connected to one of their current ‘partners’, this income will be kept in a secure account that will be claimed at a later date. If the owner of the rights finally does not want to collect them, the money will be returned to the user.

Officially not available in Spain

When we were testing the application ourselves, we were greeted with a message like the following:

“As you are currently established outside of our test markets (France, Norway and UK), we are unable to offer you our search functionality. In any case, the White Rabbit extension is still able to recognize the films you view, regardless of what where do you decide to do it “.

Nothing a VPN service with servers in London couldn’t fix: he caught us wanting to pay a couple of euros to a filmmaker, what are we going to do.