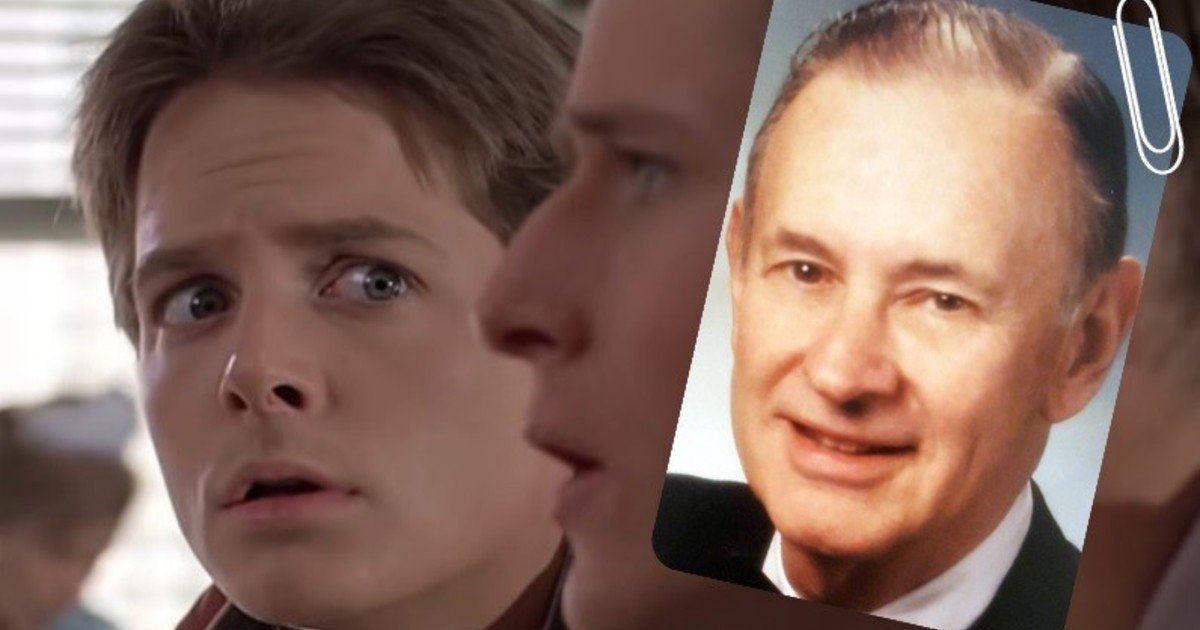 A pair of friends collide with a “no”, two, three, ten times. He ignores, he hears a refusal again, he continues offering a project with a certain unconsciousness and ends up giving a lesson in perseverance: 44 rejections before success. That’s the big (well-known) story behind the eighties tank Return to the future. But there are a hundred others, a few underground and romantic.

Que Ralph Maccio (Karate Kid) laughed at the offer to be Marty McFly shouting “this will be a bust”. Than the camera test to Ben Stiller. That the time machine was going to be a very wide refrigerator. That Danny de Vito was one of the candidates to be Doc Brown …. The juicy data on the genesis of Back to the Future There were so many and so few that it would seem that there is no longer a secret that leaves fans astonished. However, there is: an object found before all that great chain of events was the great trigger of one of the most popular movies.

There is also a man who unintentionally left a revolutionary idea on a platter. That stranger behind the milestone was named Mark and he became the true and accidental father. Lawyer, WWII veteran, former councilman, three children, he never imagined that part of his life would inspire a box office monster.

Mark Gale, the real “father” of “Back to the Future”, the movie starring Michael J. Fox

​Mark was the father of screenwriter Bob Gale. Born in 1922, married to a violinist, Maxine Kippel, studied law at the University of Washington in the 1940s, had a long life, died on March 2, 2018 (age 95) and left a special request: that instead of a stiff funeral service, his friends chose to meet, exchange anecdotes and taste ice cream with Oreo. He’d had a full sojourn in this world, as the daddy of Bob, Charles, and Randy and as the unwitting driver of that time-travel boom.

The writer Bob Gale had crossed a great path when he decided to return for a few days to get oxygen to his hometown, Missouri. It was 1980. He visited his parents, nostalgically rummaged through the hulks of the nest from which he had flown, when he came across a pearl with the appearance of a rancid thing. “In the basement I found my father’s high school yearbook, Mark, class 1940. He and I had gone to the same school, 29 years apart.”, account in the Netflix documentary The films that formed us. “I thought it was cool to go back in time. I found out that Dad had been the president of his class. I thought, ‘Would I have been friends with him at school?’ That was the lightning “.

The lightning bolt, that invisible spark that illuminated him after several work disappointments, was the sting, the injection, the wake-up call of an exhausted mind. He had gold before his eyes, but he still did not imagine the true size of the trigger. He only knew that that had given him a notion, that the blessed yearbook brought him closer to that idea of ​​”a boy who manages to go to high school with his own father” and the question that everyone asks themselves; “What would my parents have done on their first date? What would it have been like to be a fly on that first date?”.

Thus, days later, Gale saw his friend the director Robert Zemeckis and told him about this concern. “It’s great,” Zemeckis agreed. “But: What if you see your mom at school and everything she told you she didn’t do with a boy she did?”. The questions further pushed that creative impulse.

Bob Gale and Robert Zemeckis had been friends since the seventies. They had cultivated a great bond from the California university campus. Passionate film students, when all their classmates were interested in Jean-Luc Godard and the Nouvelle Vague, they felt like toads from another well loved by James Bond and Dirty Harry. They graduated filming A Field of Honor (1973), a tape of just 15 minutes that they co-wrote and Zemeckis directed. The duo wrote the 1979 comedy 1941, directed by Steven Spielberg himself. That society of the two Bobs sponsored by “King Midas Steven” would have to go through other failures like the movie used cars Until the planets aligned

The pre-project began to take shape in the offices of Columbia Pictures, with a desperate crossing of proposals that were not. The tentative title was Spaceman from Pluto and Professor Brown was going to have a pet chimpanzee, Shemp (It was finally decided that his pet was a dog, Einstein). There was still a long pilgrimage (three years) to achieve (and much more towards success) .. And the change of protagonist was missing (Eric Stoltz recorded for five weeks, including Christmas 1984, when there were no classes at school in the one they filmed) but was fired for “too serious in the role and bad mood.” Thus, the entry of the actor who had not been able to close due to a matter of schedule, Michael J. Fox, who put the body to the series, was finally specified Family Ties.

From rejection to rejection, from one office to another, the script eventually made its way to Universal Pictures. budget was 19 million dollars). Today in Missouri, some who know that pearl of prehistory boast of being the cradle of myth. The state they call “Gateway to the West”, crossed by the Missouri River and the Mississippi, was the epicenter of that first idea. They also raise the flag proudly in University City, the Missouri city where Gale was born (just over 35,000 inhabitants) and in whose little house the milestone was created.

Mark and Bob Gale. Father and son: the lawyer and his screenwriter son, whom he inspired to “Back to the Future” (Capture TV)

36 years after the premiere of the first part of the trilogy, the film’s theatrical musical triumphs at the Adelphi Theater in London’s West End. Visual bomb with functions at least until July 2022, also magnetizes critics. “The loudest applause reaches 20 minutes. After a flash, a DeLorean magically appears in the middle of the stage, the lights bounce off the body and the gull-wing doors open. The audience raves,” they praise in The New York Times. The producers contacted an ultrafan who owned one of the film’s original cars (Steven Wickenden) and “scanned” the “mold” to clone it.

The remains of Mark, the least hyped leg of big tank marketing, rest without flashes around. Perhaps it will not be too long for the most exhaustive tourist circuit of Back to the Future include a visit to your headstone. In the marble there are no cinematographic references, but fans of the film could ask that a mythical phrase from the film summarize everything: “Roads? Where we are going, we do not need roads. “