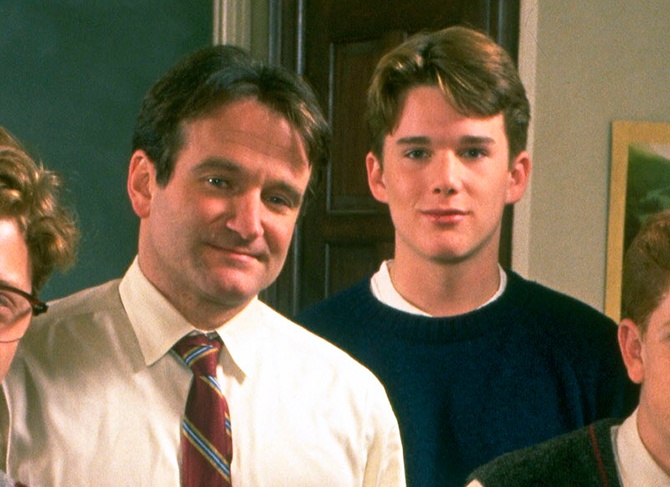 Ethan Hawke He was 18 when he played the role that would put him on the Hollywood map of the stars: that brooding, shameful-looking student in Dead poets society who learned the most important lessons of his life with a charismatic teacher in the shoes of Robin Williams. However, not only his character absorbed vital learning through poetry and applied the ‘carpe diem’ as a way of life, the young actor also lived an experience that would leave him an important lesson thanks to his co-star.

As a result of his inexperience and youth, Ethan believed that Robin Williams detested him on the set, however the late actor left him a lesson twice, although it was not until later, with the experience that the passage of time gives, that he ended by understand it.

More than 30 years have passed since the premiere of the unforgettable youth drama, and in his 50s, Ethan has shared with the world a lesson that Robin Williams taught him at the time by receiving an honorary award at the Karlovy Vary Film Festival. And since it is a recognition of his career, the memory of Dead poets society could not miss the press conference. “I thought Robin hated me ” he said to our surprise through Variety. “He had a habit of making a lot of jokes on set. And at 18, I found it incredibly irritating. I wouldn’t stop and didn’t laugh at everything I did ” he said, reminding us of those interviews and recordings behind the camera or on filming where Robin gave free rein to his imitations, jokes, voices and jokes with an unparalleled genius to spread laughter to tears.

However, Robin taught him a lesson by showing him not only that he did not hate him or that his lack of sense of humor was indifferent to him, but also by demonstrating his camaraderie, his dedication to the profession and his artistic vision. Ethan Hawke continued to share the anecdote, assuring that Robin was the one who got him his first agent and that one day he called him to leave him a lesson that he did not understand at the time.

He says he called him saying “Robin Williams says you are going to do very well ” and then he made a confession to her. It turns out that during the recording of a scene, when his character as Professor John Keating forces him to create a poem spontaneously in front of the whole class, Robin – who was almost 40 years old at the time and had a long comedic career behind him –felt intimidated. At his age, Ethan thought it was another one of his partner’s “irritating” jokes, but then he realized he was wrong.

“As I get older, I realize that there is something intimidating about the seriousness, the intensity of the young. It’s intimidating to be the person they think you are. Robin was that to me” said. And one of the moments that helped him realize how intimidating it is for an older actor to face youthful talent, but above all to fill in the shoes of the image they project, was during the filming of The priest (2017) as he was the one who faced a young actor, Philip Ettinger.

“Reminds me of a young Mark Ruffalo. It has an intensity and a shock that is extremely rare. The arts sometimes remind me of athletics: young people can be extremely good without knowing why. And that is precisely what in a certain way he himself lived in 1990. Rodó Dead poets society believing that Robin Williams hated him for not laughing at his jokes and even decided to quit acting and continue studying at the end of that job. In short, he was neither aware of his potential nor experienced enough to know it. But the film’s success, critical acclaim, support from Robin Williams, and the consequent claim to his name with a barrage of interesting offers, led him to drop out of college and give film a chance for a living.

Now, Ethan divides his acting career with that of director and writer, father of four children and repeating as Richard Linklater’s fetish actor with his next film about “transcendentalism, the 19th century movement of writers and philosophers in New England“, Which he describes as the early leaders of the abolitionist movement who”they were vegetarians and fought for women’s rights “. And it is now, with the passage of time and experience, that he understands lessons from the past like that of Robin Williams and shares his own teachings that life has given him: “If you think too much about the past, especially past successes, you breathe arrogance. If you think too much about the future, you breathe fear. There is humility in the present ”.