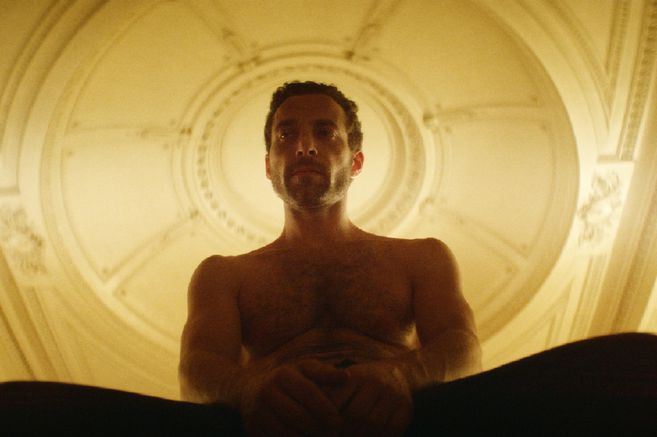 Between the war in Syria and the hopelessness of a love that is miles away, Sam Ali will face the world to win back the woman of his life. Yahya Mahayni, who plays the lead, talks about his character and his experience taking up acting.

Sam Ali, a young Syrian, sensitive and impulsive, leaves Syria fleeing the war. In order to travel around Europe and live with the love of his life, he agrees to have his back tattooed at the hands of a renowned contemporary artist. After turning his body into a prestigious work of art, Sam realizes, little by little, that his decision implies the opposite of what he originally wanted: his freedom.

An internal struggle between dignity, principles and love lives Sam, protagonist of The man who sold his skin, which was nominated for an Oscar for Best Foreign Film this year. Directed by Tunisian Kaouther Ben Hania, it is the first film production from that country to achieve this nomination.

THE MAN WHO SOLD HIS SKIN | Official Trailer Subtitled (HD)

Starring Monica Bellucci and Syrian actor Yahya Mahayni, the film is inspired by the play Tattooed man, by the Belgian artist Wim Delvoye, who in 2006 made a tattoo to a young Swiss man that was later sold for 150,000 euros (almost $ 600 million), in exchange for being exhibited several weeks a year in the most important museums in the world and recovering his skin after his death. A modern fable told in the key of drama with overtones of tragedy, satire and some romance.

Sam will have to face several problems to obtain a visa that allows him to enter Europe, specifically Brussels, and thus be able to meet the love of his life, who is already married to another man. In addition to the crazy things that its protagonist does for love, the film also resorts to themes such as contemporary art, commercialization, human rights and immigration.

Yahya Mahayni, an actor who plays Sam Ali, spoke about the themes the film addresses and his experience returning to acting to bring his character to life. “I am not a professional actor, there was a certain time in my life in which I dedicated myself to my other career, which is law, because I could not financially support myself from acting,” reveals Mahayni.

The actor had participated in several short films until he joined the cast of the comedy The Visitors. He worked in the French film Opium (2016) directed by Pablo Dury and later in Fearless Girl (2019). In 2019 he received the invitation to star The Man Who Sold His Skin (The man who sold his skin); For his work on this film, he won the Horizon Award for Best Actor at the 77th Venice Biennale.

“One day they called me because they had saved some photos of me, and at that moment they were looking for a Syrian actor for the main role. They asked me to send some videos as an audition and they liked my work, then we did other tests with Monica Bellucci and we had very good chemistry. In the end they sent me the script for my role ”, adds the actor.

Mahayni defines the situation of his character from beginning to end as something incredible, especially in the stages in which his dignity is hurt, threatened and diminished by the situations he must face, such as the simple fact of having to flee his own country . According to the actor, the entire work team behind The man who sold his skin I was very excited about the vision of the director Kaouther Ben Hania and they were very pleased with the result.

But what are Sam’s conflicts? According to Yahya, “he is a person with a lot of pride, who does not have the same standards as others; it’s a bit childish. The woman he loves married another man and suddenly gets the opportunity to get a tattoo on his back so he can get a Schengen visa and go find her. Their actions are very selfish because they are blinded by love, ”says the actor, who also reveals that the issue of visas had to suffer it firsthand, when even being a Canadian he had to ask for it in order to enter Europe.

The movie shows how Sam handles all kinds of put-downs and attacks on his dignity and humanity. “When we take it objectively, love drives you crazy, and I must personally admit that the crazy things I’ve done in my life have been out of love,” says Yahya, accepting that he judged his character several times thinking that he was selfish when he pretended that the The woman she loved would leave her husband, a man with money, for him, who had nothing to offer him but his feelings. “I remembered all the times when I too have been selfish for love.”

But beyond the love drama, The man who sold his skin It is also a criticism of some facts that transcend nationalities, such as the paradox that exists between having a declaration of human rights that speaks of dignity and equality, but the reality is quite the opposite. In fact, one of the reasons the film, which has 16 nominations and six awards, including the Best Screenplay Award at the 2020 Stockholm Film Festival, was so critically acclaimed was due to elegant reflection. and sublime that it does about the freedom that all countries should have.

“This movie shows a bit our hypocrisy and how we invest more in war than in education. This shows that we are guilty in a certain sense of our reality, we give more importance to money than to humanity itself ”, concludes Yahya Mahayni.

“The man who sold his skin”, a story of love and selfishness