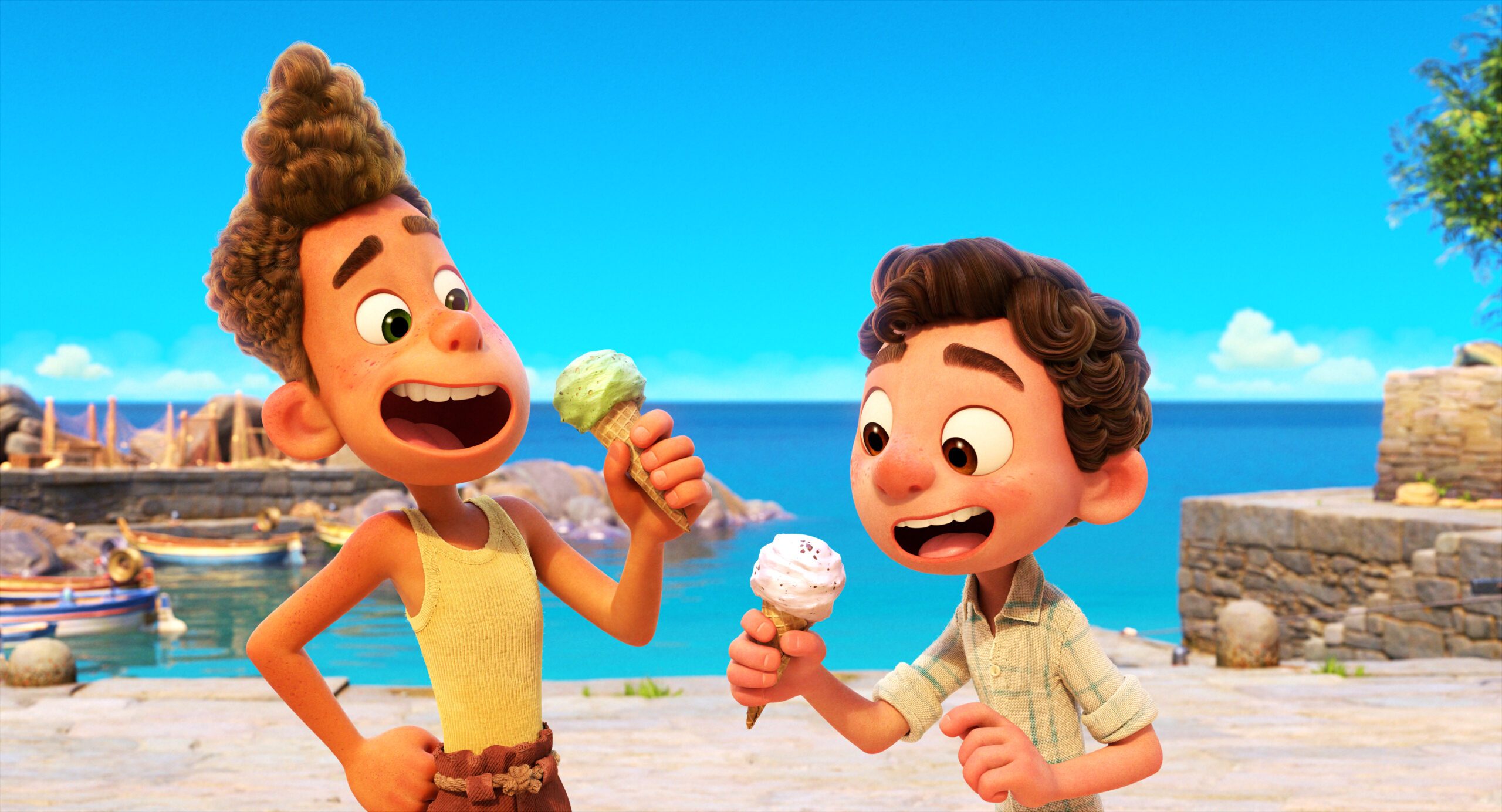 Disney, for the moment, He does not even want to hear about making LGTB + characters in your movies. It is true Pixar goes its own way and usually has less qualms than the Mickey Mouse company in modernizing its stories. Just for that they had a golden opportunity in this new movie, Luca, to give the public the first character of the company openly gay (or bisexual). But despite this, Pixar have not been able to take advantage of it.

Although neither Disney nor Pixar nor any other audiovisual company have the obligation to present characters of any kind; they would help a lot to normalize certain minorities in the world. In Spain, for example, homosexual marriage is allowed; despite this, homophobic attacks continue to occur. In addition, the reach of Disney and Pixar must be taken into account, which can help in many countries to understand that LGTB + people have rights. Remember that only in 30 countries equal marriage is allowed and that in many more homosexuals, bisexuals or transsexuals are still murdered because of it.

However, beyond what Disney and Pixar could do; a part of his audience already thinks that some of his characters are part of the collective. Li Shang (Mulán, 1998) is a bisexual icon; from Elsa (Frozen, 2013) has been said so much that it may be lesbian and the sexuality of the protagonist of Raya and the last dragon It was also debated a few months ago on social networks, as was that of another of its characters, Namaari. But to all this now is added, also, two of the characters of Luca.

Luca and Alberto, the two undisputed protagonists of the film with Giulia, they could be gay. Not only would much of the way they behave in heterosexual contexts be seen as liking each other; they love each other, they love each other. But, in addition, the story that tells Luca it can be seen as an interesting metaphor. And is that it can be read as if it were the discovery of sexuality by Luca and the subsequent exit from the closet. But we’ll talk about it a little later.

From here, the spoilers They’re a very important part of the article. If you haven’t seen the movie and want to enjoy it, better come back when you’ve already seen it.

Can two children love each other?

Many people will be shocked by this article. “But they are children!”, They will surely say. We do not know exactly how old Luca and Alberto are, the two characters that could be part of the group. But this goes beyond whether or not they may be aware of their sexuality (although many LGBT + people know it very early on).

The key question is, rather, Why doesn’t Disney dare to make a movie with LGTB + characters for children when there are many others that show heterosexual love in childhood? Examples of this are My girl (Howard Zieff, 1991) o Moonrise Kingdom (Wes Anderson, 2012), to give two examples. Although many other films use friendship from the earliest childhood to develop, in the long term, a love story between the protagonists. Of course, as long as they are heterosexual.

Love between Luca and Alberto?

But let’s see a little more in depth several of the scenes that make us think that Luca and Alberto could be in love. Even if at no point does Pixar make explicit scenes, the relationship between the two protagonists would remind, if one of them were a girl, a love story.

Alberto teaches Luca to walk, to breathe the air and makes him a little braver. She also shares her love for Vespas with him. This will bond them so closely that they will spend days building their own versions of the classic Italian bike. And testing it. At first, Alberto is the bravest and the one who always rides in his experiments. Until one day he convinces Luca to accompany him on his walk. And as soon as things get difficult for Luca, hugs her tightly friend. If they weren’t two boys, that hug would probably have hinted at something more than friendship.

In another time Luca dreams of getting a Vespa and floating through the skies; but always together with Alberto. In fact, throughout the film the two are constantly looking for a way to spend the rest of their lives on a motorcycle and together. Both one and the other do everything possible to win the race to be able to buy their long-awaited motorcycle and go off to tour the world.

All the moments that Luca and Alberto enjoy together, one teaching the other to do things, the hug on the fake Vespa and the protagonist’s dream of what his life would be like if they both managed to fly with his motorcycle; they remember what the romantic cliches The cinema has taught us what it is to live a love story.

But beyond these scenes there is a great metaphor on Luca which could be a sign that our protagonists are actually part of the LGTB + collective.

The metaphor about ‘Luca’

The metaphor, at some points, it can be unfortunate. But we know that Pixar has not made this story thinking about what I am going to tell you next; That is why we will not think that they are calling LGTB + people sea monsters.

Both Luca and Alberto are different, they are “weirdos”, according to the film. And Giulia is too; which could be read as being an LGTB + character as well. But the two of them, in particular, are for real since they are sea monsters they have the ability to change shape on the surface. This gives a lot of play in the movie, sometimes they look like the sirens of H20, that as soon as they get wet, they transform and show their true self.

But most of the movie Alberto y Luca they hide how they really are. At first, the two of them enjoy the surface and have a series of moments that in a heterosexual context would have been understood as the moments before a love relationship. After an argument with his mother, Luca goes to the surface. And Alberto convinces him to mix with humans.

Coming out of the closet

Let’s fast-forward a bit into the movie. There comes a time when Alberto becomes jealous that Giulia and Luca share many things and in the end shows itself in its true form to the girl. At that moment, Alberto hopes that no friend also shows himself as he is; but it doesn’t. This scene can be considered Alberto’s coming out of the closet. And the fact that Luca is afraid to follow in his footsteps is because he has not yet accepted himself or what he feels.

It is in the race, when Luca has to face Ercole to defend Alberto, which returns to the shape of a sea monster in the rain. And this is the scene where he saves his friend and they win the race, but Luca does something else: he manages to be brave and show himself as he is for love. If we keep thinking about the metaphor, This is when Luca comes out of the closet because he has realized that he loves his friend. Or that would be the reading if the relationship wasn’t between two guys.

But as in most LGTB + cinema; Alberto and Luca cannot be happy together. At least not right now. And the protagonist ends up leaving to study together with Giulia and all thanks to his friend. Not everyone refuses to buy a Vespa so that their friend can go to school and learn everything that interests them. But that’s what Alberto does, that sacrifices traveling around the world with his best friends (or boyfriend, if we continue with the metaphor) so that he can fulfill his dreams. That freedom that Alberto gives him so that Luca can be himself, that’s the best a couple can give you: let yourself be yourself and support yourself with your dreams.

The other couple in the movie

If all this is not enough, there is one last thing. In the ice cream scene, Luca and Alberto mess with two ladies. And, in the end, when they win the race in the rain and they show themselves to the town like the sea monsters that they are; the two of them also show themselves as they are. What if, they are two old ladies who are also sea monsters. I mean, probably lesbians who have lived on the surface together as a couple.

Luca can be one more of the hundreds of love stories that the cinema gives us; but in this case he and Alberto are much more than friends. Or, at least, we can deduce that if we gut this metaphor. As we said, the cinema is full of love stories, so Why does neither Disney nor Pixar dare to give their audience a love story starring people of the same gender?

In the case of Luca, they have been a little cowards, as its protagonist. But also, we hope they learn the lesson that Luca teaches them on their own. film: you have to be brave to live on the surface. And that includes making films in which there is more diversity..