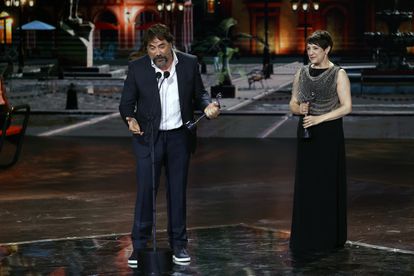 Spanish satire the good boss, by Fernando León de Aranoa, and the Argentine series The kingdom has been the winners of the IX edition of the Platinum Awards, granted by the audiovisual rights management entities of 23 Ibero-American countries. the good boss, that already won in the Goya, At the gala held last night in Madrid, he won the trophies for best Ibero-American fiction film, best direction and best screenplay. León recalled that these awards were received on Labor Day with a film that depicts the difficult labor landscape. Besides, the good boss also took the best male performance, for Javier Bardem. The actor did double in these Platinum, since on Saturday he received the award from the public for that work. With the second prize in hand, he remembered her mother, Pilar Bardem, for the celebration of Sunday in Spain, because despite her death he has her “present daily” and to the recently deceased Juan Diego, “an example of ethics”.

The trophy for best actress was taken Blanca Portillo for her work in Maixabel; the Chilean Alfredo Castro got the distribution award for karnawal Y Aitana Sánchez Gijón was the best secondary school thanks to Parallel mothers. For the public, the best actress was Penélope Cruz for this drama by Pedro Almodóvar, which was also chosen best film by viewers.

the argentinian series The kingdom —Netflix original— achieved, in the television section, the awards for best miniseries, best creator (for Marcelo Piñeyro and Claudia Piñeiro) and best supporting male performance, which went to Joaquín Furriel. Javier Cámara, as the corrupt politician Juan Carrasco, has won in the section for best protagonist thanks to Come John; Daniela Ramírez was the actress for her incarnation of the Chilean writer Isabel Allende in Isabel, and Najwa Nimri won the statuette for supporting female performer for her Sierra in The Money Heist.

During the ceremony, held last night at the IFEMA Municipal Palace in Madrid, the actress Carmen Maura received the Platinum of Honor for her long career. On stage, before the standing audience, he threatened to “cry”. The actress thanked her for the affection received from her in each experience in Ibero-America. “I want to go back and that airplanes make me enormously lazy,” she recalled. “I thank my guardian angel the day I decided to be an actress. She helped me, among other things, not to go crazy, “she explained, and provoking laughter, she argued that you can play any role” as a murderer “, and then” quietly return home “. The Madrilenian advised “patience” to the non-winning nominees. “I, Goyas, don’t want any more,” she confessed, “because I’m overwhelmed by being here. Lucky that they have sat me down next to Javier Bardem”. And although she had said goodbye to her, she again “apologized for being so nervous.”

Among the musical performances, with Lali Espósito, Pedro Fernández, Rozalén and Kany García, the appearance of Ana Belén was surprising, which was not announced. The presentation was carried out by the actor (and now director, he was a candidate in the section for best documentary) Miguel Ángel Muñoz and the Argentine Lali Espósito. The scenery reminded the people of Charm, and in the background people could be seen making juices or sitting at tables on a terrace, a detail that distracted the viewer. In addition, the criterion of awarding prizes en bloc did not help the cleanliness of the retransmission either. Just as faded was the tribute to Ukraine, made with cardboard raised from the stalls by the attendees… but not all were in place, and the giant poster of “Iberoamerica for peace” in blue and yellow was not perceived clearly.

The list of winners was completed with prizes for the Brazilian to the last forest as best documentary; to Argentina karnawal, by Juan Pablo Félix, as best debut film, and best animated feature film for the Peruvian Ainbo, the warrior of the Amazon, by Jose Zelada and Richard Claus.

There were more prizes: for best soundtrack to four-time Oscar nominee Alberto Iglesias for parallel mothers, a film that also won the best art direction, by Antxón Gómez; for best editing, for Germano De Oliveira for the Brazilian 7 prisoners; for best photography, for Kiko de la Rica for Mediterranean and best sound for Akritchalerm Kalayanamitr for the Colombian film MemoryTilda Swinton and Apichatpong Weerasethakul’s foray into that continent.