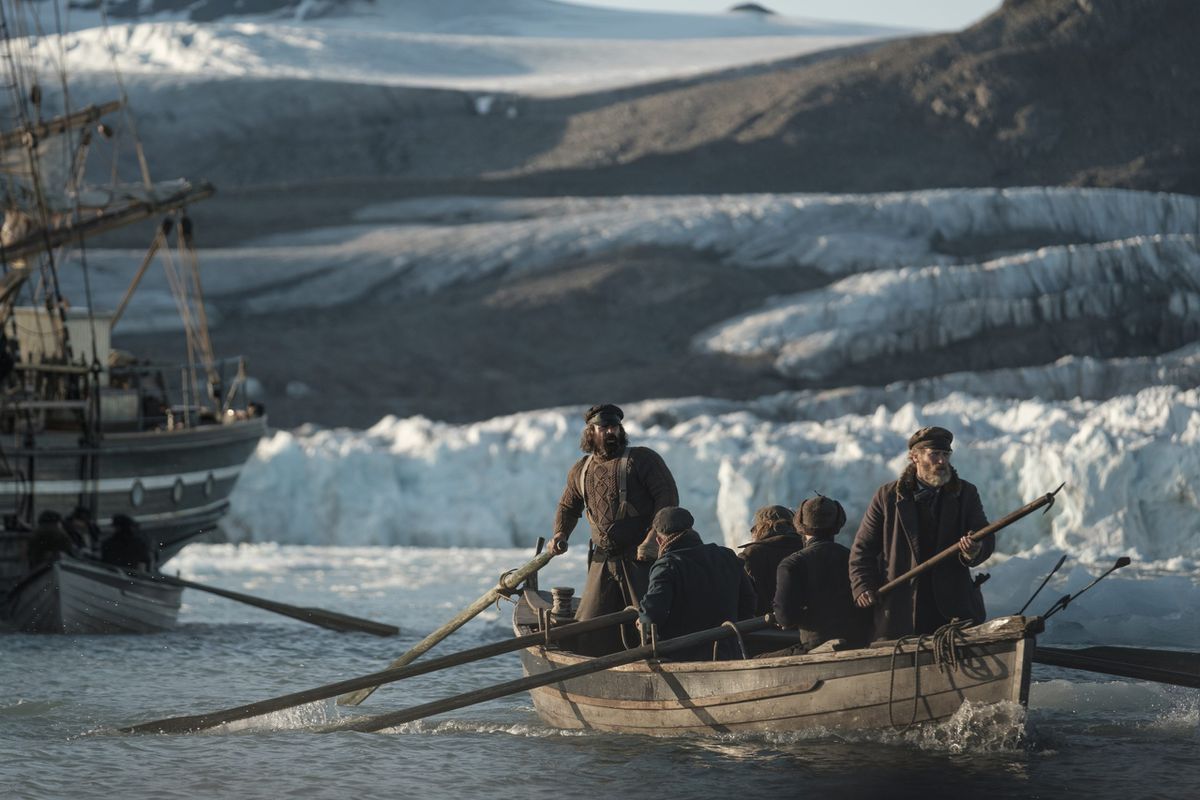 Andrew Haigh wanted his series to be as realistic as possible. Therefore, to record The frozen blood —Adaptation of the eponymous novel Ian McGuire published in 2016 (in Spain, Roca Editorial) and which follows a doctor who embarks as a surgeon on a whaler bound for the Arctic – Haigh had no better idea than to start filming, precisely, in the Arctic. To the waters north of the archipelago of Svalbard, which belongs to Norway, moved the team from the series, which is believed to be the northernmost point that has ever been shot. They even brought a 19th century recreation of a whaler there.

“What I liked the most about the book is that it is very sandy, very close to the earth. I wanted to try and do the same with the series, which of course meant that we had to shoot in very difficult conditions. A lot of people tried to persuade me that maybe we shouldn’t do that, that we should shoot in a studio, with green screens… ”Haigh recounted at the end of August in a video call interview. The result is the six-chapter fiction that Movistar + premieres on Monday 25, in which breathtaking landscapes surround the tense and dark atmosphere of the narrative.

Jack O’Connell plays Patrick Sumner, a surgeon scarred by the horrors of war in India who tries to leave his ghosts behind by enlisting as a doctor on a whaling ship. On the expedition he will meet the harpooner Henry Drax (whom he gives life to Colin Farrell), a ruthless psychopath who will complicate coexistence on the ship. The trip becomes a double struggle for survival: against the weather conditions and against humans themselves. “The original novel is very, very dark, about incredibly dark times. Here I had to take into account the audience I was addressing, so the series is perhaps a little less violent and less graphic than the book, ”explains Haigh.

For the director of movies like Weekend and creator of the series Looking, used to working with intimate stories and LGTBI + themes, directing and writing the script for a production of this dimension loaded with testosterone as The frozen blood it might seem like a big change. He finds links between all of his work: “I feel like most of my work is about an individual trying to live in the world, trying to manage his own pain and guessing how to live with it. That’s what I liked about this story dramatically. Rather than being about someone trying to figure out whether to go through with their marriage, it’s about a surgeon on a whaling ship trying to get through an incredibly difficult situation. “

The director describes the two central characters as “two sides of the same coin: one chooses not to worry about the world and the other does; one uses his intellect and the other his instinct ”. Halfway between the adventure story, the historical genre and the criminal, Haigh believes that the series is a challenge for viewers. “I didn’t want to do a traditional adventure story, but it has elements of that. He wasn’t interested in a crime drama either, but it has overtones of that, of a detective story. It’s a survival drama, and a thriller, and an existential drama about what makes us human. On television you hope to know what a show is going to be like. You don’t know here. I like to play with those ideas and let the audience decide. “

And, of course, there is the Arctic. “We encountered a lot of difficulties on the set. At the beginning we were two days without being able to record because we could not find floating ice ”, he laughs now. “Then we couldn’t abandon ship because the weather could change in a minute… You have to instinctively learn to work. You could use all your intellect to try to make it work, but in the end you have to let your instincts carry you. For me it was scary, but also very exciting. Such a shoot, for which they had to have a team of experts on the ground, who participated in the series as extras, and armed guards in case polar bears appeared, posed logistical, physical and emotional challenges. An icebreaker boat was helping to move the replica of the whaler and the ship in which the team slept. Actors and technicians were provided with special suits so as not to freeze to death if they accidentally fell into the water. “You notice the fear, you know that you are far from any medical help, that if something goes wrong, you are in trouble… It was an incredible experience, but I don’t think I would do it again,” reflects Haigh.

For the director and screenwriter, a good historical drama always reflects something of the present. What is the connection between The frozen blood and 2021? “There is the curious fact that a whale that was born in the time in which this story is set could still be alive today,” he points out by way of introduction to his answer. “When you see how those men act on that ship, although the situation has changed today, you see that life has not really changed that much. People are still obsessed with power, with dominating others. There is always a rich man sitting in an office while the poor go out to work. There are differences, but not so many, between the owner of a ship and the whalers and the head of a company and the people who work in the factory. I don’t think life has progressed as much as we like to think ”.

Asked about comparisons between The frozen blood and the first season of The Terror (Based on a novel by Dan Simmons and chronicling the last – and fateful – explorer Sir John Franklin’s Arctic expedition in search of the Northwest Passage), and even between his series and Moby Dick, Haigh first highlights a difference: “Ours is a story about a group of men on a boat going to work. There are no heroes, there is no great quest. That is what is really interesting, what is not usual in a drama: seeing normal men going to work and what happens to them ”.

‘The frozen blood’, terror and survival below zero