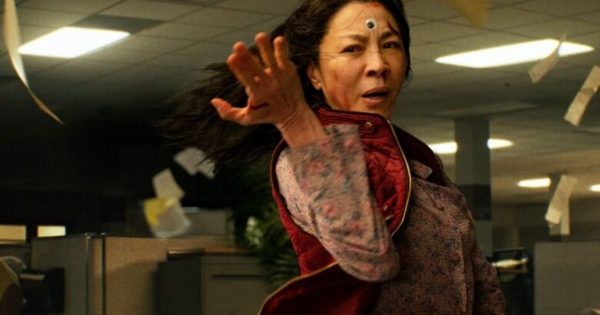 Considering we’re only in April, it’s probably still Too soon to talk about the best movie of 2022. However, there is a new premiere that came under the radar but quickly positioned itself as one of the the best of the year.

Is about Everything Everywhere All At Once, which finally had its premiere in the United States and is already causing a stir. In addition, it is expected that little by little it will be launched around the world, in what promises to be one of the phenomena of 2022.

What is Everything Everywhere All At Once?

Everything Everywhere All At Once is the new film from the A24 studio, a production company known for its original drama, comedy and horror stories. However, this time it is a science fiction epic whose plot is somewhat difficult to summarize.

The film follows the story of Evelyn Wang (Michelle Yeoh), a Chinese-American woman whose life seems to be completely dull and mundane. Nevertheless, everything changes when he finds out that he has the ability to exist in parallel universes.

In United States, Everything Everywhere All At Once It had its premiere on March 25 and little by little it is released in more theaters. And it is that, despite being a A smaller film than other blockbusters with which it competes, it manages to conquer every person who sees it.

In Rotten Tomatoeshas an acclaim of 97% and an average of 8.8, among the highest in the site’s history. “Led by an incredible Michelle Yeoh, Everything Everywhere All at Once lives up to its title in an expertly calibrated assault on all your senses”says the consensus.

The film is directed by the Daniels, a duo made up of Daniel Scheinert and Daniel “Dan” Kwan. Previously, they directed the strange film starring Daniel Radcliffe, Swiss Army Man. However, this seems to be his great success.

Although it has only been in theaters for a few weeks, many are already talking about the best film of 2022. And the story seems to be one of the most original that have been seen in recent times, conquering each person who sees it.

Besides, many already compare it with parasite, due to his way of telling the story in an engaging way never seen before. In fact, they are currently the highest rated movies in Letterboxd historysite where moviegoers choose the best films.

Michelle Yeoh ands who has received the most applause for his performance in Everything Everywhere All At Once. In fact, although the last awards season has just ended, Many postulate her as the next winner of the Oscar for Best Actress.

Unfortunately for now there is no confirmed release date from Everything Everywhere All At Once in Chile. However, if your networking success continues to explode as it has, andIt is very likely that we will soon be able to see it in national cinemas.

The epic movie that is already named the best of 2022