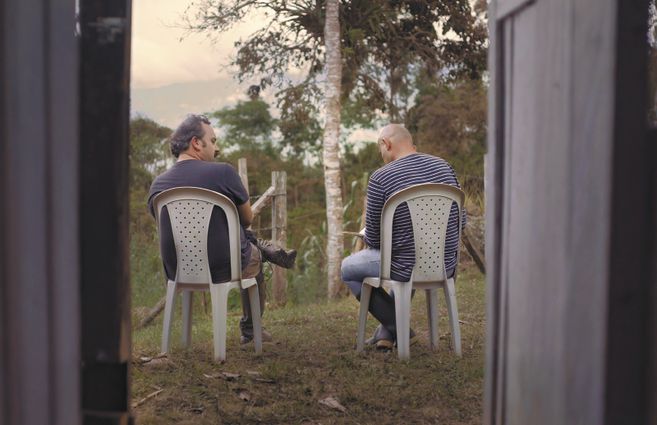 After 18 months, Mrs. Beatriz Echeverry was freed from a kidnapping. She said that the guerrilla who took care of her in captivity treated her well. He spoke of it with love. His son, the director of this film, looked for this guerrilla, found him and made a film about this story.

“I have three brothers who were soldiers while I was a FARC guerrilla. How did my family live with this? Well, learning: it was our turn, we had no choice. While I was fighting from the subversion, my brothers did it with state rifles. They were 22 years in the guerrilla, “says Güerima, a former FARC guerrilla, who was in charge of two hostages whom he called” the grandparents “and took care of them as if they were their parents.

From the first day of his captivity, he disobeyed orders and made his abduction a less torturous experience. So he proposed. He asked for notebooks to write and they were not given, so he took the “communications” ones and gave them to the hostages. Many times he was very close to the Army for an operation and the order was always that if they got too close he would kill them, but not to hand them over alive. And yes they were close, but he never fired. The last thing he did was intercede for his release, something that happened after 18 months of captivity.

Have we already asked ourselves all the questions about the conflict? Surely not: the questions, perhaps, are inexhaustible, but why do we get tired of talking about it? It will be for the same reason that we have responded to each other over the years and we already repeat without thinking, so we know that resistance is not optional: this bloody loop seems inexhaustible, we are exhausted with news about the war and it seems that there is no solution that complete it completely.

On the other side tells the story of a family that did not find solutions for a tragedy “that could have ended worse”: it continues to hurt and the trauma of the kidnapping seems to be an issue that is not solved, but one learns to process, to cope, but that never goes away. It is a film about how to forgive what, at first glance, is unforgivable. A testimony of some victims who were interested in the reasons of their perpetrators, who years ago were sentenced without the right to defense.

Iván Guarnizo’s mother, Mrs. Beatriz Echeverry, was kidnapped in 2004. This film is about what her children learned about her captivity through a diary that she wrote. On what they, from the “freedom”, suffered imagining the fate of their mother: the torture of the question about her life, the treatment that her kidnappers gave her, her age and her mental health, her age and the jungle, her age and loneliness.

We recommend: Reactivation or resistance (Opinion)

When she was released, Doña Beatriz said that the guerrilla in charge of her care never mistreated her. In fact, he remembered it fondly. He shared anecdotes about him and even said that he repeatedly disobeyed orders to protect her. Guarnizo, after the death of his mother, searched for this guerrilla for a year and a half and found him. This documentary ends with the conversation between the children of Doña Beatriz and Güerima, the now ex-guerrilla, who, in addition to agreeing to speak with them, asked, again, for forgiveness.

“In Colombia we have made many films about the war and about the past, about the wounds that the conflict left us, but very few about how to change those wounds. To do this work I held onto the past, but only the future mattered to me. On the other side he really talks about imagining a different future. The experience of this movie transformed me in a way that I did not expect. At first I thought I could become more cynical and the opposite happened: it renewed my faith in people a bit. I am at peace with myself and that episode of the kidnapping is no longer a wound that oozes anger, it turned into something else that I cannot describe in words, ”says Guarnizo, the director, who traveled with his brother, Papeto Guarnizo, to the place where his mother was kidnapped. According to them, a journey to the heart of Doña Beatriz, a journey that helped them understand how she was able to forgive.

You might be interested in: Debut of Marithea and Valles-T in the freestyle world championship that takes place in Mexico

Did the perception of how your mother dealt with the kidnapping change after walking in her footsteps in the Colombian jungle and rivers? Did it change after speaking with Güerima, your custodian?

Ivan Guarnizo: Totally, that was the fundamental fact. Reading his diary, going to the places where he was and talking with who he was, made me see our experience and his experience in a different light. It was understanding that woman and that mother that they deprived us of for two years, knowing about the life she had and about which we could only imagine and conjecture, sometimes in a very dark way. Then I began to understand her day to day with all its contradictions, the pain that she felt in loneliness, the abandonment, the anger that she did not know what was happening, the impotence, and at the same time the solidarity that she experienced. together with his cousin Julio and the guerrillas with whom he established brotherhood ties, a kind of mother figure who wove with them, especially with Güerima.

After the screening of the film at the Bogotá International Film Festival, there was a discussion between Guarnizo and Güerima, moderated by Juan Manuel Santos, former president of Colombia and Nobel Peace Prize winner. His questions, which were woven with anecdotes of the process that resulted in the signing of the Peace Agreement between the State and the FARC, gave more details about the relationship that the children of Doña Beatriz and Güerima now have: they are so close that they speak calmly about brotherhood and mutual gratitude. Forgiving, they say, is an act that is not done for the other, but for oneself. “Every armed conflict turns out to be a parricide, a fratricide,” Guarnizo concludes.

Was your mother in the habit of keeping a diary before being kidnapped? Santos asked the director of On the Other Side. He replied that no, it was something that started when they detained her. Santos confessed that he always regretted not having done the same, of not having recorded what happened in his life day after day.

We suggest: John Galán: “I’m not interested in transcendence in marble”

The close-ups of that mother’s diary, in this film, show those pages like a map. An El Cid notebook that, from its cover, it is deduced that it was made for a student from some school, not for a kidnapped girl in one of the jungles of Colombia. The texts written by Dona Beatriz seem to be traces, as if she had wanted to trace every sensation. Strokes so that others could imagine, with a little more precision and detail, what your feet look like after walking for hours between roots and mud. Words that would tell that he once stepped on a snake and that the guerrillas, after carrying it due to their exhaustion, seemed to him very strong people