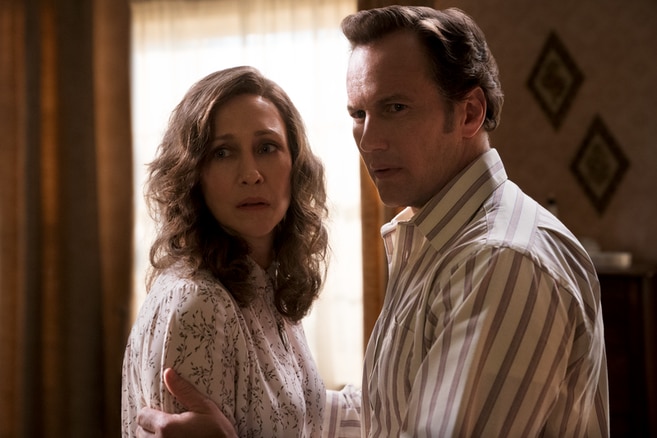 The film premiered on June 4 in the middle of the pandemic and has managed to raise $ 59.7 million globally, ranking among the 10 most viewed, according to the IMBD portal.

It happens in the movies … it happens in real life. Like “The Conjuring 3“, based on the account of Arne Johnson, there are several real shocking cases that have jumped to the big screen in which a phrase like “The devil made me do it” is part of terrifying stories like “The Amityville Horror”, “The Texas Chain Saw Massacre” y “The Possession”.

You may be interested in: Patrick Wilson and the epic scares of “The Conjuring”

“The Conjuring: The Devil Made Me Do It”, directed by Michael Chaves and starring por Vera Farmiga and Patrick Wilson, who give life to Lorraein and Ed Warren, researchers of paranormal phenomena, premiered on June 4 in several US cinemas in the middle of the pandemic and has managed to raise 59.7 million dollars globally, positioning itself among the 10 most viewed, according to the portal IMBD.

The tape that is part of the saga “The Conjuring”, set in the 1980s, it is based on the Johnson case, which shocked even the experienced Warren, where for the first time in US history a murder suspect claimed thisr possessed by a demon.

THE CONJURATION 3: THE DEVIL FORCED ME TO DO IT – Official Trailer

A phrase that has been used to set various fictional but also real stories that have been brought to the big screen by different directors.

In the case of “The Conjuring 3”, in real life the event was very mediatic because in the trial of Arne Cheyenne Johnson, also known as the case “The Devil forced me to do it,” the defendant claimed in his defense that the acts committed were during a demonic possession.

In the story before the Justice, the Glatzel family assures that their son David Glatzel, 8 years old, allegedly was the host of the demon that forced Johnson to kill Alan Bono, following an exorcism of the minor in which according to the Warrens the demon left the boy’s body and poseyó a Johnson.

The young man’s lawyer argued that the crime was due to paranormal acts, but the judge noted that it could not be proven and was unfeasible before the law, for which on November 24, 1981 he was convicted of first degree murder.

The house of horror

Amityville, Long Island, 1974. The death of the family DeFeo at the hands of his son Ronald, who shot his parents and four siblings while they slept, inspired “The Amityville Horror” (2005), directed by Andrew Douglas.

You may be interested in: First reactions to “The Warren File: The Devil Made Me Do It”

Based on the Jay Anson novel and the 1979 film, this version featured performances by Ryan Reynolds y Melissa George like the Lutz family, who move into the house where the DeFeo murders took place and begin to experience strange phenomena.

In real life, Ronald Jr DeFeo He was 23 years old when he drugged his victims and then shot one by one with shotgun shots in the back, while his mother had an impact on the head.

DeFeo He said that he had found his family murdered, but the authorities discovered that he was the author and, although his lawyer tried to declare him mentally ill, as he claimed that he had heard devil voices who ordered him to kill his family, the judges did not believe him and sentenced him to 25 years in prison for each of his victims.

The story of Ed Gain, known as “The Plainfield Butcher”, motivated stories inspired by this dark character such as “Psicosis” y “The Texas Chain Saw Massacre” (1974 and 2003), especially because of his turbulent childhood and youth with his mother, an extremely religious woman.

You may be interested in: The new movie of “The Conjuring” already has an official trailer

On “The Texas Chain Saw Massacre”, 1974, produced, written and directed by Tobe Hooper, The story of two brothers is shown, who travel with their friends to Texas in order to check the grave of one of their relatives, which had been desecrated. However, on the way they are attacked by a family of cannibals.

In real life, Gain murdered Mary Hogan y Bernice Worden, and during the investigations of the authorities to his house, the most varied remains of corpses and objects that Ed had made with human parts were found.

On January 6, 1958, a hearing was held in which the experts diagnosed him: schizophrenic and prone to hallucinations. Psychologists argued that Gain considered himself an instrument of God and the Devil to raise the dead. The judge declared him incapable and sent him to the state mental hospital.

The journalist from Los Angeles Times Leslie Gornstein wrote an article in 2004 titled “A jinx in a box? ” about a man who was auctioning a most disturbing item on eBay: according to him, it was a veritable “dibbuk box,” a kind of popular spirit in Yiddish folklore from Jewish tradition.

According to the owner, the object had had a negative effect on their owners: sudden hair loss, nightmares that terrorized an entire family, sudden illnesses, dark visions and inexplicable voices that spoke of killing.

This true story inspired “The Possession” (2012), a film directed by Ole Bornedal.