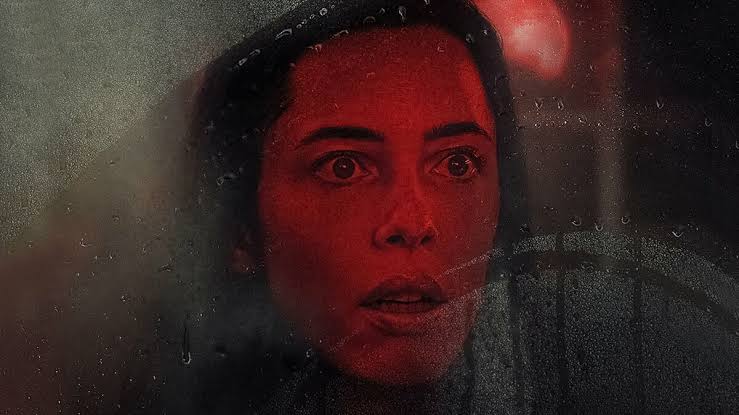 Ghost and haunted house stories are very popular in the horror genre when it comes to cinema, mainly because they deal with topics closer to us than adventures with zombies, vampires or werewolves: starting from this, David Bruckner -director of ‘The signal’ and ‘The ritual’—Believe in ‘The Dark House ‘an atmospheric and highly accomplished thriller in which Rebecca Hall shines as an extraordinary performer (something that I had already shown in films like ‘Vicky Cristina Barcelona’, ‘The Gift’ and more recently, ‘Christine’).

In this clearly modern gothic story, written by Ben Collins and Luke Piotrowski, Hall is Beth, a young widow in crisis, secluded in the strange and beautiful lake house that he built for her. in upstate New York. And the thing is that the house is not just a stage; He is an indispensable character for the development of the film.

The house’s endless glass doors and windows foreshadow the eerie reflections, mirror images, and doubles that appear in the stylish and genuinely sinister horror movie Bruckner swiftly builds: There is not a single take that is wasted and the overall effect is very impressive.

Beth begins to investigate the lake and misty forests that surround the house, and comes across the buried secrets of her late husband. (and some other horrible stuff) and as it progresses, the plot is balanced by Hall’s brilliantly controlled performance, whose almost palpable pain (she’s as effective as Toni Collette in ‘Hereditary’, so you know what I mean) has brought her to the edge of sanity.

When someone you love suddenly commits suicide, a strange and unbearable form of pain seizes one. This is clear from the beginning of the tape. Beth shows us how this assault on everyday life upsets her after her husband Owen (Evan Jonigkeit) pulls out a motor boat in the middle of the lake and gets shot (with a gun she didn’t even know she had) .

From there an inevitable collapse arises as Beth reconstructs the mystery, starting with the haunting puzzle of a note (“You were right, there is nothing, nothing is chasing you”) to a secret life that was lived right under her nose without her noticing. Who was the man she married and why does she feel that, although dead, he is not completely gone?

‘The dark house ‘is a film that unfolds, both in what is told and in how it is told. Beth’s desperate search for something, anything that can shed light on this paralyzing darkness that has made its way into her mind in the wake of Owen’s death, leads her to discover a husband who was a thing to her. and something very different for others.

Following the gothic formula proposed by Daphne DuMaurier on ‘Rebecca‘, which Hitchcock beautifully portrayed as a classic and base of the genre and carried to great heights by filmmakers such as Robert Zemeckis on ‘What Lies Beneath’ (with Michelle Pfeiffer y Harrison Ford), the plot of a woman who realizes that her husband is not as perfect as she had supposed and that he has an abominable secret that is going to take its toll on her.

In trying to make your movie about something more substantial than just a ‘spook’, Bruckner plays it and places his pieces with precision; does not abuse scares or goreRather, it seeks to hit us on a more psychological than visceral level, which really keeps everything afloat, even in its most disorderly moments, along with Hall’s very effective and accomplished performance, which demonstrates an intense and unwavering mastery of the material and without resorting to intense melodrama, it is highly effective in conveying the horror caused by their loss.

Rebecca Hall is a world-class actress, who She was recently so wasted in a role as nevertheless as the one she had in ‘Godzilla vs. Kong ‘ and this chilling film it is a very good showcase for his talent, as well as for Bruckner’s directing, which makes the most of the nooks and shadows of its location and orchestrates a series of brutally efficient startles, one of which will drive even the most seasoned horror fan out of his seat (but we won’t say which one).

There are enough clever and disturbing surprises buried inside ‘The Dark House’ as if to overcome the elements that do not work so well in his formula, mainly because everything is delivered with feverish conviction on the part of the incomparable Hall in a boundless performance as an intelligent woman driven to the extreme by pain, anger and fear. The house may be built on shaky foundations, but the woman who inhabits it and her story are absolutely unforgettable.

IN VIDEO: The terror of this young woman is what millions of women live in Mexico