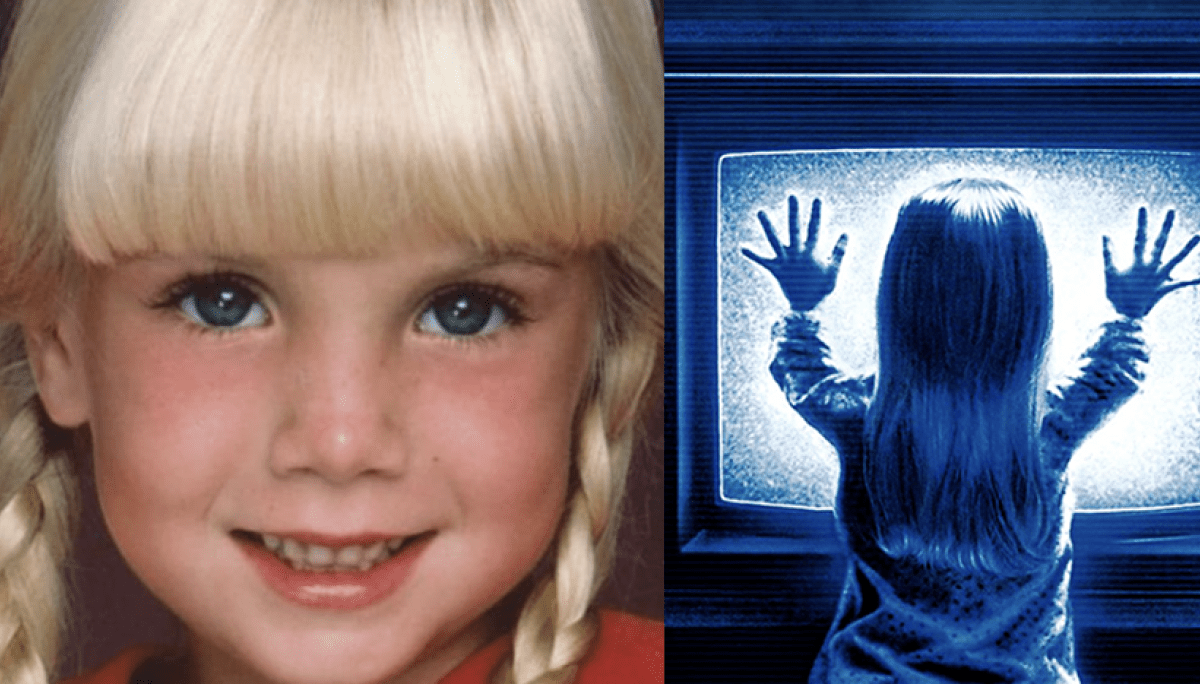 By Alberto Cano.- The terrifying fictional stories that we see in the horror genre are sometimes the fruit of curious legends that take these lurid tales off-screen. We have already talked to you a long time ago about the apparent curse surrounding the Dakota building in New York, place where it was filmed The seed of the devil by Roman Polanski and that behind it hid a rather terrifying death history, but if there is another film that can boast of having a horrifying story behind the cameras that is Poltergeist, the film directed by Tobe Hooper and produced by Steven Spielberg in 1982 whose main cast lived a terrible mortal fate. And there are those who think that it is due to a very particular curse.

For those who do not remember, Poltergeist told us how a middle-class family began to experience supernatural phenomena in the house they had just moved into, where the young daughter, the renowned character of Carol Anne Freeling played by the young woman Heather O’Rourke, becomes its main victim. But O’Rourke was also the victim of a cruel fate in real life, since After his participation in the film and its two sequels, he died at the age of 12 due to a serious intestinal disease.

It was in 1987, during the recordings of Poltergeist 3. Shortly before filming began, Heather O’Rourke began to show symptoms of what looked like an aggravated common flu, however, her worsening health led doctors to explore other options without a clear diagnosis. It was first reported that O’Rourke suffered from giardiasis, an intestinal inflammation produced by a parasite, but the subsequent arrest of the non-presence of the microorganism and the continuous swelling in his intestines led to it finally being diagnosed as Crohn’s disease (chronic inflammation intestine).

The little actress had no choice but to shoot everything Poltergeist 3 medicated to be able to work, although as the director recognized Gary Sherman in the documentary series Cursed Film (which can be seen in Prime Video and deals in depth with the black legend that surrounds this horror trilogy) the young woman was always happy and enjoyed the recordings, although she showed some physical change as a side effect of the medication. However, in January 1988 Heather O’Rourke showed a serious decline and her health began to deteriorate at an alarming rate. On February 1, she had to be admitted and operated urgently, however, the little girl could not get out alive.

Her death was due to a misdiagnosis, since Heather O’Rourke suffered from an acute congenital stenosis that caused a severe intestinal obstruction and not from Crohn’s disease. If the problem had been detected in time, the actress could have undergone a previous surgical intervention that could have saved her life, but it was not the case. This is the official version of his death, however it has fed the list of deaths that many attribute to a cinematographic curse.

And it is that long before the death of the little protagonist of the saga, Dominique Dunne, who played the older sister of O’Rourke’s character, she was murdered at the hands of her ex-boyfriend. It happened in 1982, the same year as the premiere of Poltergeist. And just the night before Halloween. John Sweeney, who was his former partner, showed up at their house with the intention of rebuilding their relationship, however, his appearance triggered an argument that resulted in Sweeney strangling Dunne to death. She was able to be transferred to the hospital where she remained in a coma for five days, but she never regained consciousness and was eventually disconnected. She died at the very young age of 22 and was remembered in the second movie of Poltergeist with a small mention, noting that the character was absent because he was in college.

And speaking of Poltergeist II, it was two of its main interpreters who also suffered a tragic fate. First Julian Beck, the actor who played the terrifying movie villain known as the Reverend Henry Kane. Beck was able to finish shooting his scenes for the sequel, however, died right in the middle of post-production on the film on September 14, 1985, eight months before the release. However, his death was due to stomach cancer that was diagnosed in 1983, so before joining the series he was already in a complicated state of health.

Something similar happened with Will Sampson, actor known for his role as Bromden in Some one flies over the cuco’s nidus which joined the sequel to Poltergeist to play an Indian shaman. Like many of his colleagues, he was also the victim of an untimely death after shooting the film, since had to undergo a lung and heart transplant in 1987 which resulted in kidney failure leading to his death at age 53. And it is that the actor suffered from a degenerative disease called scleroderma that caused serious complications in the tissues of his vital organs.

All these deaths occurred in the 80s in the middle of the premiere of the movies of Poltergeist, but if we move forward in time we can see how other lesser members of the team have not escaped a similar fate either. It was the case of Lou Perryman, an actor who used to be seen in very small roles in films of the time and who in Poltergeist played a bricklayer named Pugsley. Perryman was brutally murdered on April 1, 2009, when he was 67 years old, by an ex-con named Seth Christopher Tatum.. The two did not even know each other, but chance led his murderer to want to enter his house to steal his car and end his life with an ax.

Just a year later the death of Zelda Rubinstein, actress who played the medium Tangina Barrons in the first installment. This suffered a heart attack when he was 76 years old, but given his advanced age, one could speak of a natural death rather than a premature death, as happened with the rest of his companions. But given all the history behind this trilogy of films, it does well to feed the theory that a curse haunts those involved. In fact, it is easy to find theories that suggest that these films were cursed for lending themselves to shoot one of their mythical scenes with real human skeletons.

Specifically, I’m talking about the scene at the end of the first movie where actress JoBeth Williams, who played the family’s mother Diane Freeling, is seen bathing in the mud with the bodies that were buried under her new home. This is what he points out in the documentary series Cursed Film the head of makeup and special effects at Poltergeist, Craig Reardon, who even considers it offensive towards their work.

“Apparently, there are many people who believe that the fact that real human skeletons were used is a kind of pretext to explain why two actresses who worked on the film subsequently died, which is not only conceptually ridiculous, but personally offensive to my”he admits. “No low-budget film will pay anyone to sculpt a human skeleton when all you had to do was go to a biological supply house and get a human skeleton.. You know, reduce the budget “, he qualified.

And obviously the idea of ​​a curse is ridiculous, but of course, It is more than curious that there have been so many coincidences regarding the high number of deaths that have occurred among the members of the cast of Poltergeist. Although it is always interesting to think about such a possibility, however absurd it may be.