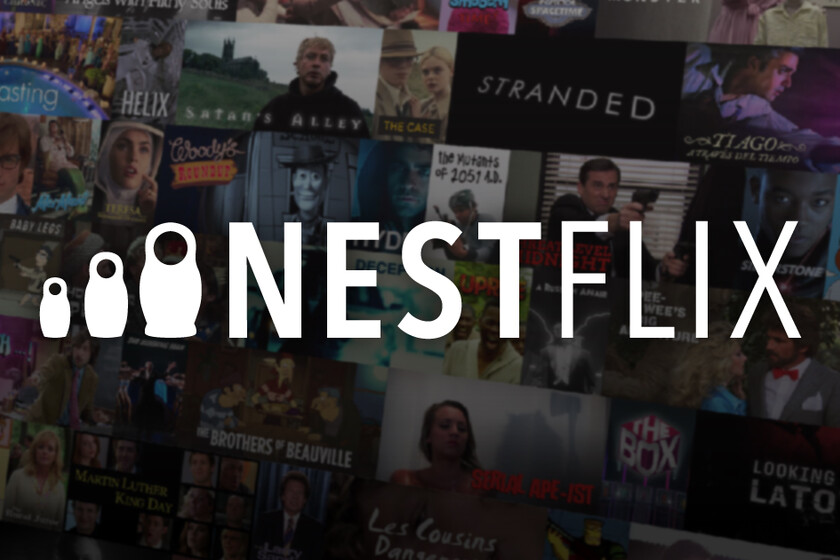 If all the current fashion of superheroic multiverses (whose origin in Marvel goes back to the early eighties at the hands of Alan Moore and in DC goes back to the 40s) has taught us something, it is that it is a perfect method to rehearse alternative visions of well-loved characters, posing stories that continuity does not allow (and the fans wouldn’t allow it either). They are the basis of productions such as’Loki‘, ‘What would happen if…?‘and who knows if the Flash’s future cinematic adventures in DC.

A couple of recent moviegoers projects they have taken the witness of this spirit and pose a game with their followers that proposes films in alternative realities. Films that never existed, but that could have existed and that are replicas, sometimes parodic and sometimes twisted, of productions that we do have in our reality. One of them is the Nestflix website and the other, the Multiversal + twitter account

7 TRICKS to get the most out of NETFLIX

‘Nestflix’: The Netflix You Always Wanted

Does the four season sitcom sound familiar to you ‘Everybody wants the Hypnosis’? What about the fellow cop series starring Joey Triviani? ‘Mac & C.H.E.E.S.E.’? And the complete works of such popular action actors as Jack Slater O Lucas lee? It is possible that if you have seen movies and series like ‘Futurama’, ‘Friends’, ‘The last great hero’ or ‘Scott Pilgrim against the world’ they sound familiar to you because they were false productions that starred their characters.

These types of films within films are called nested stories (“nested stories”), and are compiled by web designer and artist Lynn Fisher, who has not only made an exhaustive compilation of this type of meta-referential winks, but has disguised it as a platform of streaming Netflix style. In this way, you can access a synopsis of all the films and a nice classification by genres and styles.


The success of Nestflix has been such that Fisher recognized in an interview with Mashable that it had received more than seven hundred new proposals to include on the web, and that it will try to add. So far, he has only done it with ‘Liutenant Devil!‘, which appears in’ Lucifer ‘and which is the requirement, according to the author, most repeated by her visitors. A true tribute to the fake movies that exist in fictional worlds, and that Fisher says he discovered with ‘Angels with Filthy Souls‘, the classic black film that the protagonist of’ Alone at home ‘sees on television

Multiversal +: The non-existent cinema you always wanted to see

Something more twisted is Multiversal +, a Twitter account that makes up movies that don’t exist but could have existed in realities very close to ours. It is a meta-referential game, specialized mainly in fantasy cinema and that sometimes requires a twisted sense of humor and a certain knowledge of the classics and infraclassics of the genre to catch some winks.

This controversial X-rated cartoon offered a speculative origin for the relationship of Goldberry & Tom Bombadil that outraged or titillated every Tolkien fan. Nevertheless, it’s cult following has continued to endure. pic.twitter.com/4O2Xck4oOq

The best thing is that, in the style of Twitter movie accounts, each short file includes four images that can come from other films or be photomontages. For example, in the impossible mix of classics of the detective and the supernatural ‘Scooby-Doo and the Blair Witch‘, some images from the mythical animated series are manipulated to look like they came out of the classic from the found-footage. O en ‘The Erotic Adventures of Tom Bombadil‘some images of Ralph Bashki films are chosen to propose an impossible meeting between his best known productions: his animated films for adults and his adaptation of’ The Lord of the Rings’.

The possibilities are endless: ‘Magic Kingdom‘by Denis Villeneuve (a movie of the year 2031!) with a mature Ryan Gosling playing Walt Disney; ‘Serenity 3‘, Joss Whedon’s 2016 film from the’ Firefly ‘universe we’ll never see; or ‘Glimpse Inside your Velvet Bones‘which would certainly have been Tim Burton’s masterpiece: Edgar Allan Poe Risen writes the script for a giallo for Federico Fellini. A true journey through the history of cinema that we do not have, but that we certainly deserve.