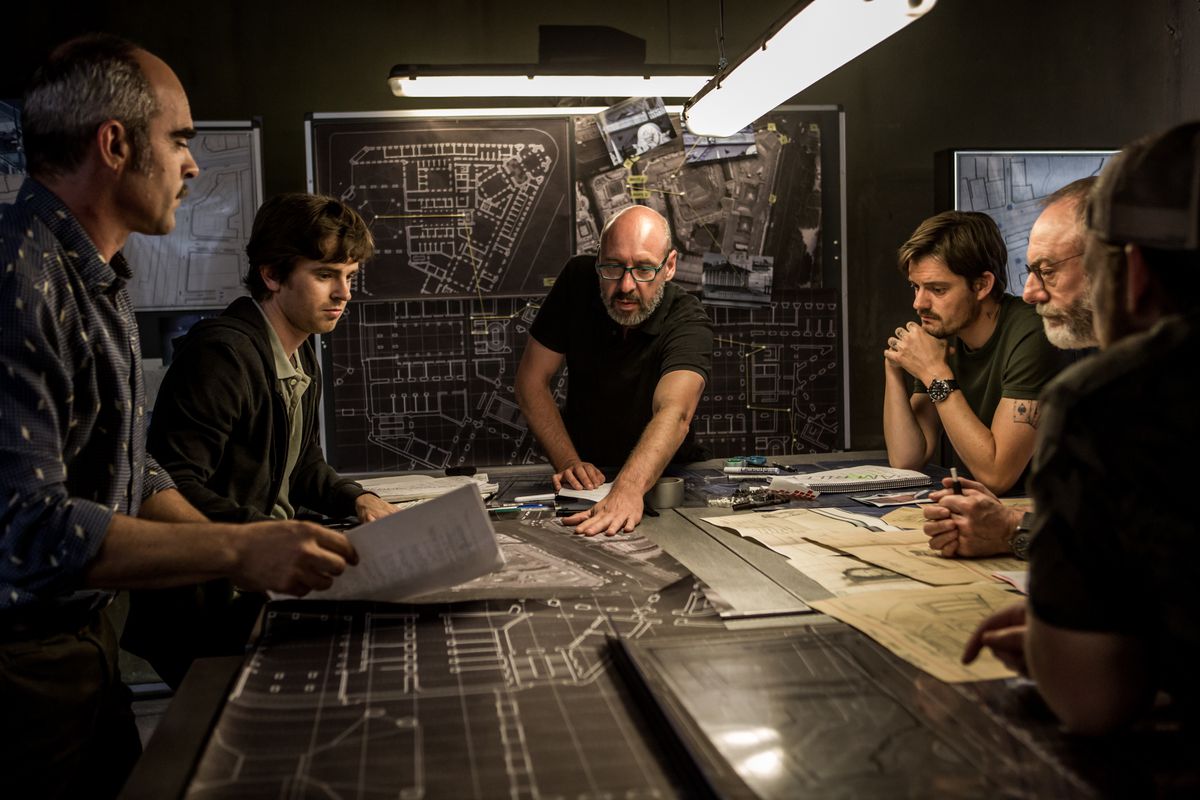 The public returns to the cinemas to meet again with the Hollywood blockbusters after the sinkhole of the pandemic, but not to see Spanish or auteur cinema, which is usually attended by a more adult audience. The absence of viewers in this age group endangers the cultural diversity of the films that reach the big screen. While in countries such as the United States, France and China the collections are close to those of the buoyant 2019, in others such as Italy or Spain the return has not been achieved. This Friday they are released Lemon bread with poppy seeds, by Benito Zambrano, an intimate story starring a tribe of women and based on the best seller by Cristina Campos, and Way Down, a thriller about a robbery of the Bank of Spain directed by Jaume Balagueró; and Spanish cinema will observe, between restless and hopeful, its launch. It is a matter of business, but also of cultural diversity.

For Way Down, Sony has reserved 362 cinemas with 525 screens. Jaume Balagueró reflects: “I always think of the public. I’m not saying that’s the right thing to do, or that you just have to think about it. ” The filmmaker acknowledges his fear that the box office may not be with him, “but at some point it has to be released, and we’ve had the film stopped for a year.” He concludes: “At some point we have to go back, this is the world that exists and it is necessary to adapt.” Benito zambrano re-presents a female portrait in Lemon bread with poppy seeds, which comes out with more than a hundred copies. “There is very little cinema in which the main characters are women, the majority are men and it seems to everyone normal. However, when you look at female characters it seems that you are doing something extraordinary, ”says the filmmaker. “There is an audience, the oldest, who no longer goes, and it is a shame for Spanish cinema. I hope that Lemon bread … not only spectators of thirty years or more approach, but also be accompanied by their partners and friends ”. As confirmed by the Sevillian, this female audience segment is “very culturally active and if that segment likes it, it could go very well … within how bad the outlook is”.

Since last September, the top 20, the list of the 20 highest-grossing films each weekend in Spain has not exceeded – added those two dozen titles – 4.8 million euros, when in pre-pandemic times they could have raised almost double. There was only one exception: the weekend of October 15-17, when it premiered Venom: there will be carnage, that reached 6.3 million euros. Analyzed every top 20, Hollywood cinema has been contributing its grain of sand. To those mentioned are added family titles, such as The Addams Family 2, The Paw Patrol or the recent The wolf and the lion that also reach numbers from before covid-19. It is the Spanish and auteur films most thought out for a large audience that are not providing their usual thrust. Last weekend the landing of Eternals, the new installment of the Marvel universe, led to top 20 up to 5.1 million euros, of which 2.5 million came from the film by Chloé Zhao. Venom it is already close to the eight million euros accumulated in four weeks, and Dune has already overcome them, yes, after eight weeks on the bill. So why only € 5.1 million when there are no capacity restrictions anymore?

From FECE, the federation of cinemas that groups 80% of the sector, prefer to be prudent and not make evaluations about this delicate moment of cinema in Spain. And they point to sleeper (the movie that continues to attract audiences each week) of the season, Maixabel, by Icíar Bollaín, which in its seventh week on the bill has reached 2.5 million euros, a pleasant surprise. But individually and anonymously, the theater owners do show their fear, and explain that they are selling 44% of tickets less than on the same dates before the coronavirus. Neither Parallel mothers, Pedro Almodóvar (2.4 million euros in five weeks), nor The good boss, by Fernando León (2 million in four), have lived up to expectations. Worse has gone to The laws of the border, by Daniel Monzón, with only 640,000 euros.

More signs: the Paz cinema, located in the center of Madrid, a theater specialized in auteur cinema in dubbed version, and with a large collection capacity, has signed a collaboration agreement with the mk2 exhibition chain “to address similar problems in theaters”, according to its managers. And two films that two years ago seemed predisposed for a good start like A mocking spirit (comedy that adapts a text by Noël Coward with Judi Dench) and Fantasies (sentimental entanglements with luxury French cast directed by the Foenkinos brothers, achievers in cinema and literature) have been directly ignored. Yes Eternals has achieved an average per room during the weekend of 2,600 euros, A mocking spirit He has only obtained an average of 369 (16,000 euros in total) and The fantasies, 260 euros (7,000 in total). Criminal saints, the prequel to The Sopranos, It has entered the 14th place, with 66,613 euros and an also very poor average of 409 euros. Meanwhile, premieres in this sector continue to be delayed, such as CODA, by American Sian Heder, or The grandmother, scored by Paco Plaza.

A source from the production explains: “If this continues, we will end the diversity of cinema, especially Spanish, reduced to comedies. And it is worse for independent distribution, that of medium-size films. As there is no radical change, only the cinema that young people want will be released ”. Lara P. Camiña, from the distributor Bteam and spokesperson for Adicine, the association that groups independent distributors, points out: “The premieres of majors [las productoras de Hollywood], and theaters have turned to them. I don’t think diversity is in danger, but audiences for small films have certainly disappeared. ” And he underlines: “It may be that habits have been transformed during confinement, and the adult public has not yet recovered the cinema as a weekly activity. Today he is much more selective ”. And as an example of activities to change the trend, he puts Merci, the independent film market that will be held in Seville until tomorrow, within its film festival, and in which a hundred professions from film, platforms and television attend the viewing of 25 titles of the next auteur releases.

Balagueró explains about his responsibility for the box office: “It escapes us completely. I am hopeful that people will return ”. In his case, he has Telecinco’s machinery behind him for a project that has been in dance for seven years, and that describes the theft of the Bank of Spain’s vault just during the last games of the World Cup in South Africa, which he won Spain. “It was filmed in Cibeles, with four teams filming the recreation of the final simultaneously. It was an enjoyable shoot and at the same time nervous. I always live them like this ”, says the creator of the saga [REC], that defines like this Way Down: “A film straddling the thriller and the adventures, which solves its enigmas with ingenuity and zero violence ”. Zambrano makes a wish: “I want all the rooms to be filled, whatever the movie.”

There is a direct connection between both premieres: Lemon bread with poppy seeds is a novel by Cristina Campos, scriptwriter and director of casting Balagueró’s partner. “The book is very cinematic. It is a story of urban women, workers who, in one way or another, live an incomplete existence ”. And since the story revolves around a bakery inherited by the two protagonists and Zambrano always likes to have the opinion of his neighbors, on November 1 he offered a special pass for the Lebrijano bakers, since Lebrija is the filmmaker’s hometown : “The movie is giving me tremendous satisfaction because it works so well. People like it and they make it their own, they live it and they get excited ”.