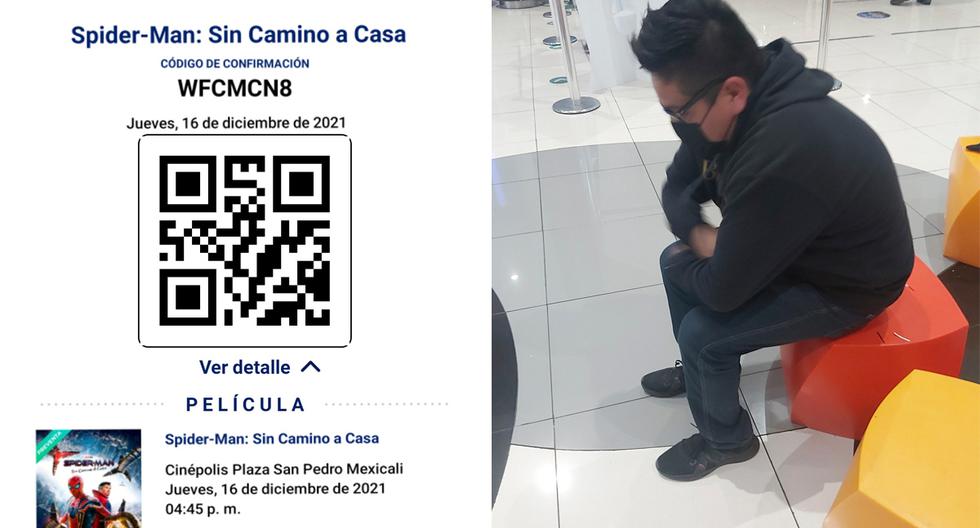 The movie of “Spider-Man: No Way Home”Is being a resounding success in every way. In addition to the shocking scenes, fan craziness and such, he is leaving certain facts viral that generate some feelings in social networks, like that of this Mexican gentleman who, due to a simple mistake, was left without enjoying his role.

Several weeks ago, when the pre-sale of tickets for the premiere and subsequent dates began, fans around the world battled for their long-awaited tickets and Daniel Morenno, as identified in Facebook, was no exception and acquired a total of 4 tickets, which he boasted on social networks.

Anyone who makes this type of virtual purchase is aware that they should not show the QR code Well, with that image someone else can go to the box office and make them pass as if they were his. But nevertheless, Daniel He seemed not to know it and now he will have it more than present before wanting to do the same.

And is that the Thursday, December 16, the day he thought he would go to see the new arachnid superhero movie, arrived at the movie theater with his family and was surprised that he could not enter since someone had taken that image that he shared in his Facebook and redeemed the tickets before him.

Without a doubt this fan of Spider-Man he stayed very sad and disappointed with the person who stole from him and also with himself for having made a tremendous mistake of sharing his entries in social networks. To express himself about what happened, he used his own account Facebook to upload a picture of him very sad.

His two posts went viral and accumulated hundreds of comments from other users., who made fun of him and also recommended that he be more careful with the things he publishes on digital platforms.

The man who couldn’t see the new Spider-Man movie

When was “Spider-Man: No Way Home” released?

The world premiere of this film by Marvel, expected by thousands of fans around the globe, was the Wednesday, December 15 and, in most of the countries where it is broadcast, tickets were sold out several weeks in advance due to all the expectations that had been generated by rumors that were finally confirmed.

Subject bragged about his tickets for “Spider-Man: No Way Home” on social media, but his QR code was stolen