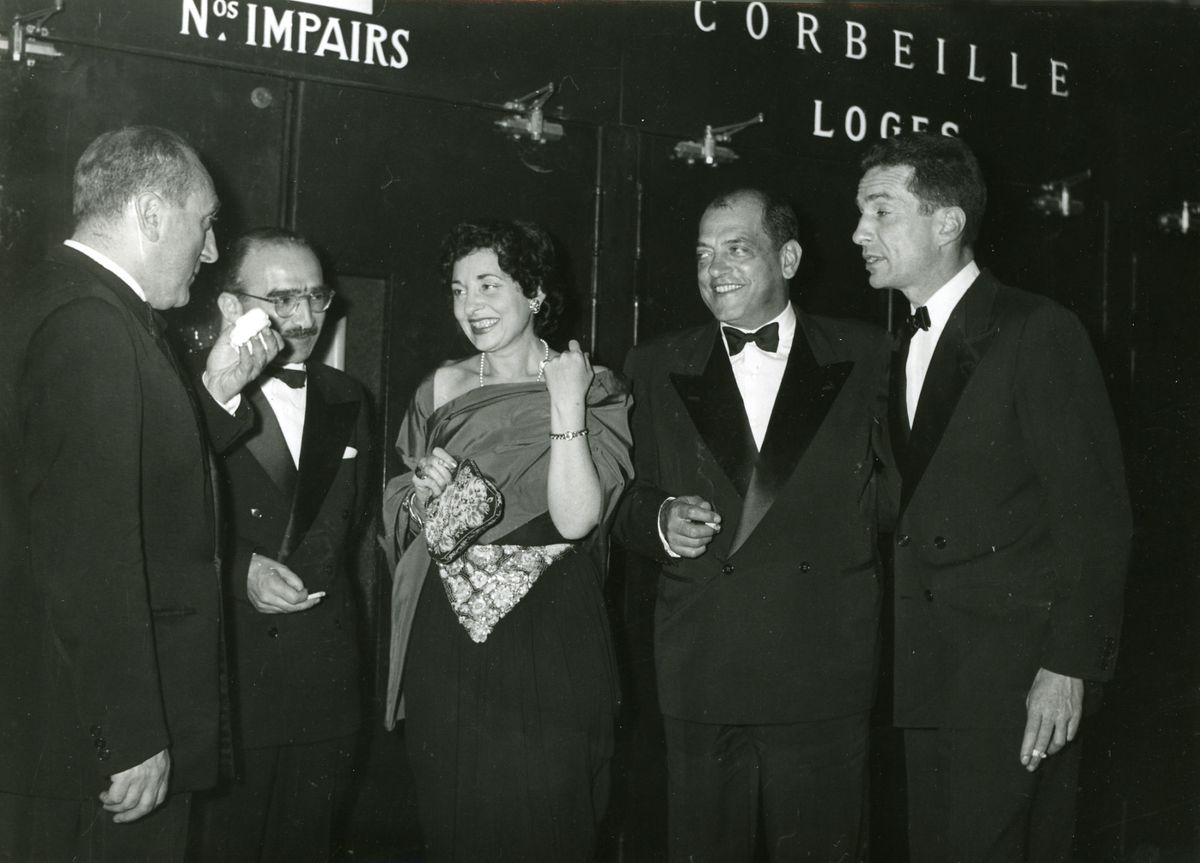 60 years have passed since Viridiana, by Luis Buñuel, will win the Palme d’Or (shared with the French A long absence) from the Cannes festival. It is the only feature film in Spanish that has achieved the award, and it did so with the Mexican flag: most of the financing was provided by the producer Gustavo Alatriste, husband of the protagonist, Silvia Pinal; a a small part came from Laponia Films, a company set up by Elías Querejeta with former colleagues from his time as a footballer at Real Sociedad, and another was disbursed Pere Portabella. Since then, Spanish cinema only reached a similar relevance in 2016 with the Palme d’Or for best short film for Juanjo Giménez for Timecode. And in this edition there will be no changes: in the official section there is not a single film in Spanish (in the jury there is only one Latino, the Brazilian filmmaker Kleber Mendonça Filho), not at Cannes Première either, and you have to look at other sections of the contest to find Spanish cinema.

If the Un Certain Regard section has been released Thursday Fire night, of the Mexican Tatiana Huezo, and a few days ago it was The civil, of the also Mexican Teodora Mihai, in the Critics’ Week participated the Spanish Liberty, of Clara Roquet (which got good reviews) and the Colombian Protection, by Simon Mesa Soto when we have the information. The festival has decided to wink at the anniversary of Viridiana with the screening Friday at the Cannes Classics section of the documentary Buñuel, a surrealist filmmaker, of the cinematographic historian Javier Espada, that during 16 years he directed the Center Buñuel Calanda.

“The beauty”, Espada tells in Cannes, “is that the premiere will take place in the Buñuel room of the Palais des Festivals. The film, which has unpublished photos taken by Buñuel’s father, confirming that surrealism ran in the family, delves into the work of a creator who considered cinema, in his own words, “as a provocateur of artistic expressions”, and “A wonderful weapon if wielded by a free spirit.”

Espada goes further: “There are sequences in his films that today could not even be considered, such as the shooting of a rosary and the dream of the Pope’s execution in The milky way, or the Christ martyr laughing out loud at Nazarin. We have lost many freedoms ”. In addition to providing the restoration of numerous sequences and photographs, and placing those ideas in their precise context, the documentary makes a lucid journey through cinematographic surrealism, a movement that Buñuel, at the end of his days, looked at with some disenchantment: “We surrealists wanted to change the world and we have only changed the windows of the fashion stores.”

To Buñuel, “the two works that were created more freely The Golden Age Y Viridiana”. A lot, because with the second he even managed to bypass censorship. Jose María Muñoz Fontán, then Director General of Cinematography, collected the award on behalf of Buñuel, who was ill in Paris, and on his return to Madrid the following day, he was abruptly dismissed from his position: The Osservatore Romano, the official Vatican newspaper had described the film as “blasphemous”.

Viridiana It was not released in Spain until April 1977. “La Palma is preserved by Pinal,” recalls Espada, whose documentary – the first Spanish in this section – stems from a conference he gave at the Mexican Cineteca a decade ago. “As a filmmaker, Buñuel was always faithful to his obsessions,” he says. In addition, a restored version of The way (1969), by Ana Mariscal, strange decision that can only be explained because this new copy has a French distributor and because of the clouding of Marc Cousins, the fashionable cinematographic popularizer, by Mariscal.

On the other hand, the Directors’ Fortnight has been more attentive to Latin voices, with two Latin American feature films and two shorts in its programming. Yes The employee and the employer, of the Uruguayan Manuel Nieto, he liked it, Clara Sola, by the Swedish-Costa Rican Nathalie Álvarez Mesen, has been shocked by her portrait of a different woman, possessing “a special connection with God”, according to her creator, in a wild area of ​​Costa Rica. “I was born in Sweden and grew up in Costa Rica, but this film has been made thanks to the Swedish producer, we have struggled a lot and we made it out of stubbornness,” recalls the filmmaker at the contest.

About his protagonist, Álvarez has a direct answer: “I like characters who live in a moment of change, or who live between two worlds, in this case, between the physical and the supernatural. That is why I am interested in working with movement, also because I have moved a lot in life ”. In the background, a reflection on the imposition of patriarchy, “which makes us hide things as natural as menstruation. That is why in the film we have decided to turn up the volume on certain things through poetry and magical realism to draw attention to that violence ”. The ending brings her character closer to the protagonist of Carrie. “I like it, it’s an honor, because Carrie is super powerful. Now, are we fighters or witches? “

The short film goes to witches Sycorax, co-directed by the Galician filmmaker Lois Patiño (Red Moon, Coast of Death) and by the Argentine Matías Piñeiro (Isabella, The Princess of France) that they review The Tempest, of Shakespeare, before launching himself to a length, Ariel, on the same subject, which will be filmed next year. “It was a laboratory to see how we shot together,” says Piñeiro, who has been exploring female roles in Shakespeare for some time. “We have merged universes”, confirms Patiño, “and we have been with the process for five years, which has been superimposed on other works”. And as director of photography, Mauro Herce, a wonderful image manager for the latest Galician cinema. “It has contributed a lot to construction because all the voices add up,” explains Patiño.

Sycorax was filmed in the Azores islands, where they found a suitable landscape and atmosphere to investigate a witch who Shakespeare mentioned in his work, but never appears. “We have touched ideas and concepts that will not be in the long, to be The Tempest seen from the spirit of Ariel ”, assures Patiño. “And we talk about echoes and subjectivities, because what we know about Sycorax comes from Prospero’s mouth. Why do we have to listen to him? Let’s investigate ”. About the festival, it is clear to him. “Cannes is worth a lot. It serves us as an accolade, as confirmation that the experiment has gone well and has not remained in the drawer, and even to access other financing, “says the Argentine, who confesses” very excited. “

In the Fortnight the animation short is also screened The Windshield Wipe, an inquiry about love the work of Alberto Mielgo, creator with a lot of work behind him, and who, for example, directed The witness in the first installment of Love, Death & Robots, de Netflix. “As it takes the same time to make a short as a long, I do not differentiate it,” he clarifies by phone. The Windshield Wipe travels through different cities, shows various thoughts about love and the couple, plays with animation to immerse the viewer in this globalized world. “I have been drawing the places where I have been, from there the creative composition is born, which adds photographs. And then I go to the characters, each one different, with their own personality ”, explains Mielgo. “I close the script in the storyboard, there I am, my work is ”.

Although he acknowledges that his work at Netflix “has opened all doors”, for Mielgo, screening his work at Cannes is “a dream come true”, because he has always liked French cinema. On The Windshield Wipe there is something of “Rohmer, who thought a lot about love.” And it underlines the success of releasing an animated short, a genre that, despite the great advances in recent years, still needs “vindication, especially the adult one”, among moviegoers. Mielgo now working on a project that can not speak. But it will be in line with his creative premises: “I always strive to do something different, and if Cannes welcomes such a project, it is spectacular.”

But there is no Spanish film either in the official section or at the Cannes Première, although Spanish is heard in Memory, of the Thai Apitchapong Weerasethakul, who has taken Tilda Swinton to Colombia and there he has shot with the Mexican Daniel Giménez Cacho. There have been contacts with a Spanish film, which has preferred another contest, closer to its release in commercial theaters. Last year, Thierry Frémaux, general delegate of the festival, told EL PAÍS: “We fight for Spanish cinema to be in Cannes, but you have a tradition of going to the Berlinale first. In any case, Pedro Almodóvar is a regular. And I think that in recent years the presence of Spanish cinema in French cinemas has increased. There is a new generation of creators that adds to the great authors. That this is reflected in Cannes is one of my goals ”. Buñuel is still waiting.

A quarry for students

The Cannes festival takes care of all the movie stops. Of course there is a red carpet for the stars, but also a script lab or a section created for students and young filmmakers: Cinéfondation. And in his selection has entered ‘The Fall of the Swift’ (in the image), by Gonzalo Quincoces, produced by ESCAC, the film school of Catalonia, in which Quincoces has finished Direction of Photography. This is the second time that ESCAC has participated in this section. “The first was in 2015, with the short ‘Víctor XX’. And it’s curious, because when I went to study at school, my first day I attended a screening of that film, and now I’m the one in Cannes,” he recalls Quincoces.
‘The fall of the swift’ is born from a “secret relationship” that the director lived. “I really wanted to set it in a time and a place where hiding a homosexual love fits in”, that is, Bilbao, the eighties of the twentieth century. Until there he took the technical team from Barcelona. “It was clear to me,” he sums up. On his experience, he has only good words. “We are at work breakfasts, presentations with festivals and producers, and other events,” he confirms. “And of course, our projections. They take care of us.”