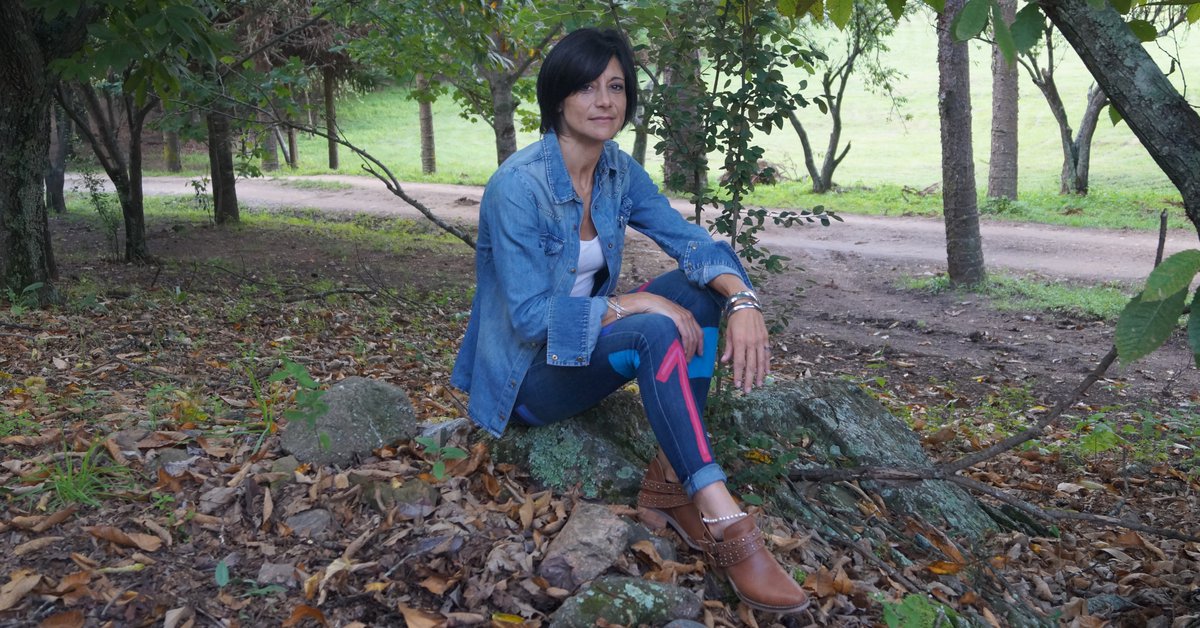 Silvina was 44 years old and new to Córdoba Capital. He had just arrived from Villa General Belgrano so that his children could go to university and he had also just met a neighbor, a man who ended up being her partner for several years. He was with all of them the afternoon he posted a photo on his personal Facebook profile: the photo that triggered what he now calls “a horror movie.”

“I had met this neighbor and we had first started a friendship, so he invited us to spend the day in the field. We all went as a family, with my children and their children, and when I returned I published a photo in my account in which I was with a horse, nothing more, “he tells Infobae Silvina Balonchard, who is a communicator and worked for years in different radio programs.

“The point is that we were on the road, already returning home, and I began to receive notifications from a person I did not know: a cataract, it was one per minute ”.

According to him endless evidence that he kept to present in court, to which you accessed Infobae, what he read that August 16, 2018 was all in the same tone: “Is that the field of (I mentioned the man’s first and last name)? Because it takes us all to the beginning to seduce you. Until 5 weeks ago we were a couple and we lived together for 2 years. He hates psychology and philosophy. He quite likes to treat you badly after a while ”(SIC).

Later – Silvina explained chronologically before the prosecutor – “he began to upload photos of them together below my post: I published the photo, wrote ‘love love’, the minute again, the photo ‘love love’, and so on without stopping. I got very nervous but I waited to get there because my daughter was in the car with a friend ”.

“It is something that gets into the brain, it leaves you in a permanent state of alert,” he says.

She had to calm down before telling him what was happening and asking who this woman was. “I had palpitations, a lot of fear, later I understood that what I had that night was a panic attack. It is not the same that someone comes to tell you something in person as when it happens on the networks, I have 5,000 contacts, the maximum that Facebook allows. Right away my mom started asking me: ‘What’s going on Silvina? Who is she? Who is he?'”.

His neighbor told him that they had had a relationship that had ended, “and that he had blocked it.” But Silvina’s question was another: “How does she know about me if he didn’t post a photo with me? How does he know that I am in the field with him? I started doing journalistic work to retrace the path until I came to the conclusion that this woman, obsessed with him first and then with me, I was tracking who he added on Facebook and checking their profiles. When he traced mine, he found that photo and the attacks began. “

Silvina, who always worked in radio, had to stop doing the program she did

That -according to what Silvina later ended up denouncing- it had only been the beginning, because it quickly spread to his professional environment. “One day I uploaded a photo of an event we organized,” continues she, who is co-founder of a community of entrepreneurs in Córdoba in which there are more than 400 women.

“The same day I see that he had downloaded my photo, had cut off my head and uploaded it to his personal networks. That really gave me a panic, doing that not anonymously but in their own networks talked about their profile. He uploaded that photo and raved about recognized journalists from Cordovan media. I was very concerned that no one did anything, but I was new to the city, no one knew me ”.

What he experienced is compared to the movie “Cape of fear”

Silvina uses the film “Cape of fear” -in which the character of Robert De Niro, obsessed and seeking revenge, appears everywhere to Nick Nolte- to try to explain what he felt. “I went to Linkedin and saw that I was checking it, I looked at all my stories on Instagram, I wrote: ‘If you don’t want this to happen, don’t upload anything else.’ He appeared to me on Facebook, on WhatsApp, by mail ”.

Once, he continues, I was doing a streaming interview with a Spanish coach and the professional began to read live the comments that the followers were leaving. “The coach thought they were questions about the topic we were talking about and started reading without a filter. But it was this woman: He denigrated me, said that I did not have the capacity to talk about it, to find out. I turned pale live, everything was recorded ”.

Overwhelmed, the man who was her partner called the woman on the phone “to try to appeal to her common sense, her sense of humanity, and nothing, He told him that he couldn’t bear to see that he was with someone else and then he was going to make me pay. In that conversation he told me that he had a folder on his computer with all my information that had been downloaded. He repeated: ‘I have everything on my computer, everything, everything, I know everything about you.’ I knew when I got married, what I do, what shows I had done, who my children are, my daughter’s friends, everything. “

“I wanted to disappear,” he confesses about the times he made an attempt on his life

The impact on Silvina’s mental health was enormous. “I had many attacks of anguish and there were three episodes in which … I attacked my integrity. There came a time when my anguish was so great that all I wanted was vanish. I no longer knew what it was capable of, I came to think that it could be able to hire a hit man to attack me or my children. So I started to measure my movements when I left the house, to look everywhere all the time, not to post what I was going to do, I left my work on the radio ”.

The “I attempted against my integrity” does not seem to be extreme. In March 2019 and also in Córdoba, Edu Vázquez, a well-known DJ in the world of electronic music, committed suicide after repeatedly denouncing his ex-girlfriend for “extortion, harassment on social networks and gender-based violence”.

“She is not just a jilted ex,” she says.

While many dear people told him “But block it and voila, it’s jilted”, Silvina was clear that this was not the way. “Nor did it seem right to me to naturalize violence like that ”. She felt surrounded: “This gets into your head, into your brain. The web works 24 x 7 every day of the year, there is no truce. I couldn’t sleep, I woke up with a start and I imagined her sitting in my room, watching me sleep; I lived with tachycardia, with anguish, that happens to the brain of a person who lives in a permanent state of alert ”.

The mancha on it continued to grow, to the point that Silvina found herself giving explanations, submitting to “something they will have done”. The memory, now, is the preview of a talk he gave at a university in Villa María, in which some colleagues who had seen the cataract of comments on the networks in which they had promoted it, asked him: “But what did you do to him? I found myself in the place of having to explain that I had done nothing to deserve that. “

“But what did you do to him?” Asked his colleagues

Despite the impact it can have on mental health, digital harassment is not yet considered a crime. “So, when I went to report they asked me: ‘But did he threaten you with death?’ And I answered them: ‘He didn’t tell me’ I’m going to kill you ‘but let’s see, when a person is telling you’ I know everything about you, I know who your children are, your children’s friends, what are your movements? what is he telling you? ‘ There is a huge legal vacuum when the harassment is through the networks, to the point that it would have been convenient for me to have this person show up at my home or wait for me outside ”.

Feeling alone and not knowing what to do, “totally drowned in the middle of all this ”, Silvina learned of the existence of the Argentine Association for the Fight Against Cybercrime (AALCC), where there is a psychological and legal assistance team.

“There I began to understand and see that what was happening to me was happening to many more people. Teachers who have had to resign their chairs, people who have closed their schools due to campaigns of discredit of some parents. The person, in quotes, dies: dies in their networks, dies in front of the publicThey have to change their profession, their locality because they don’t have the tools to defend themselves ”.

The petition on Change.org

Therefore, they launched a campaign in Change.org (you can join here) for what digital harassment is considered a criminal offense. “It is essential that there is a law that fills this legal void, that there is a legal limit so that the victims can have a legal tool with which to defend themselves,” he continues. Silvina recently managed to get the complaint taken – she spent more than three hours recounting the events – although the legal vacuum keeps justice, for now, in a fog.

It is not that the issue does not exist, in fact there are already several bills presented in Congress. What he asks is that they be treated. “That attention be paid to hurt that generates ”, closes Silvina. “And above all to defend the true freedom of expression, because the freedom of expression is that each one can dispose of their networks with freedom ”.

Vengeance and sextortion: the first trial in the country begins today for disseminating intimate sexual material
Instagram Mafia: the drama of the young woman from Quilmes whose account was kidnapped with more than 300 thousand followers