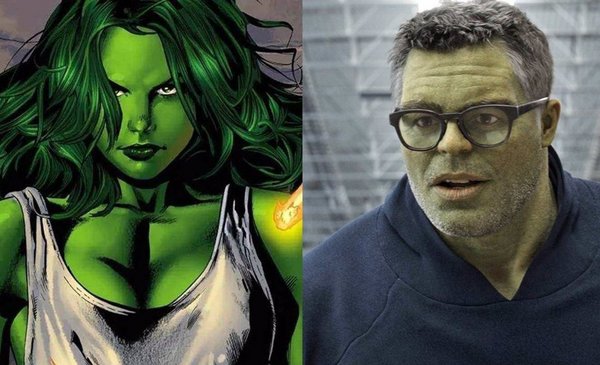 The Disney+ Day could not forget one of the most powerful superheroines of Marvel. The platform released the first teaser trailer for She-Hulk, in which Tatiana Maslany is seen turned into Jennifer Walters. The fiction is scheduled to premiere in 2022.

The series that will have a marked comedy tone and that comes with a warning: “Don’t put me in a bad mood!”. The preview is very brief and simply introduces Walters, a “normal lawyer”, although it is later seen that she has little of normal. The teaser shows that Walters will not be alone, as he will have the help of Bruce Banner, since Mark Ruffalo’s Hulk can be seen, in his version of ‘Smart Hulk’ or ‘Professor Hulk’ that has already appeared in the Marvel Cinematic Universe.

The presence of the green giant in this state confirms that the series will be set after what happened in Avengers: Endgame. On the other hand, the appearance that the superheroine looks when she dyes herself green is very reminiscent of her classic costume from the comics, as she wears sports leggings and a white and purple T-shirt.

In the series, Walters will serve as an attorney specializing in legal counsel for cases focused on superhumans. In addition to being Mark Ruffalo’s Hulk, there will also be Tim Roth, who reprises his role as Abomination. Fiction made in the key of comedy, it will hit the platform next year and is by Jessica Gao and directed by Kat Coiro and Anu Valia.

A little over a month after the premiere of Spider-Man: No Way Home (Spider-Man: Sin camino a casa), Sony released the first poster of the film, in which the wall-crawler faces the Green Goblin along with three other of the Sinister Six. The Argentine theatrical release is scheduled for December 16.

The movie poster shows the arachnid superhero during the sequence already seen in the trailer, in which the character strikes his mythical pose on the hood of a car before facing the villain played by Alfred Molina. But also, In it you can see, in the background, over the sky and for the first time, the Green Goblin approaching Peter Parker. Also present are Electro rays and an ambiguous form of sand that belongs to the Sandman.

Saving the inclusion of the antagonist played by Willem Dafoe, the poster represents a ‘recycling’ of material already seen by fans in the preview, which follows the policy up to now maintained by those responsible for its promotion based on showing as little of the film as possible , without revealing anything that could give clues to his argument. So much so that elements that are an open secret, such as the appearance of Tobey Maguire and Andrew Garfield, were not yet seen within the film’s publicity.

To face these hordes of villains, Parker will have several of his usual allies in this trilogy such as Zendaya, Jacob Batalon and Marisa Tomei, who will reprise their roles. On this occasion, Benedict Cumberbatch’s Doctor Strange will accompany the young wall-climbing hero. Despite not being confirmed, there are also rumors that the film could feature the appearance of Charlie Cox, who played Matt Murdock, better known as Daredevil, in the series of Netflix, as the lawyer who will defend Parker. Although the trailer did not show it, another rumor announced that J. K Simmons would once again play Jonah Jameson, the editor-in-chief of the Daily Bugle newspaper.

She-Hulk comes to Disney +: trailer for the new Marvel series