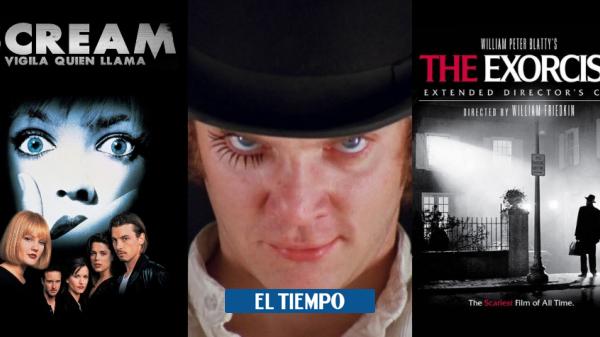 There are different reasons why a movie scene, or even the entire production, be censored To the general public.

Many times there are differences between directors and film rating institutions such as the Motion Picture Association (MPA).

This last entity is in charge of imposing the qualifier of all types of audiovisual content that is going to be broadcast on a massive scale. In that sense, it regulates the contents and imposes whether or not it is suitable. for all audiences.

(You may be interested in: Have you seen them? These Netflix movies and series have been censored).

-G: general audience.
-PG: parental guidance or content that must be supervised by an adult and that does not affect the sensitivity of their children.
-PG-13: offensive content for children under 13 years of age and must be supervised by parents.
-R: Parental-oriented content for people under 17 years of age.
-NC-17: Content solely and exclusively for adults.
-X: Content for adults with a high level of sexuality.

In history, some films or scenes were considered too ‘explicit’ and, due to the ratings or the viability of the ticket office, they were censored in various places.

In the opinion of the ‘Motion Picture Association’, they could not enter to any category. They were, and still are, a ‘shuddering void’ in the classification cinematographic. We tell you what these movies were.

One of the ‘films’ The most terrifying scenes in the history of cinema was in ‘the hurricane eye’, because, before its premiere, it was stated that one of the scenes offended the Christian faith.

It wasn’t until 25 years later that the scene came to light.

In this one you could see Regan Mcneil (Linda Blair) hurling sexual expletives at Jesus and God. This, while inserting a cross into his genitals with such brutality that he ended up hurting himself.

“The Exorcist”, from the year 1973.
The script belongs to William Peter Blatty.
The film stars Ellen Burstyn, Jason Miller, Max von Sydow and Linda Blair, in the role of Regan MacNeil, the possessed child.
The voice of the devil to Regan MacNeil, Mercedes McCambridge, terrifying pic.twitter.com/K8gR9NqHGN

The mythical movie of the masked killer it struggled for a long time before being released as an R-rated movie. One of the bloodiest scenes had to be cut to make it fit for a wider audience.

The scene showed Casey’s boyfriend (Drew Barrymore) with his intestines in the air after he was killed by ‘The Mask of Death’. After this, the body was seated on a chair.

Wes Craven, director of the feature film, said that in the fourth installment of the film there were no changes regarding scenes of this tone and that in the industry it is very difficult to determine what it is. material sensible For the general public.

The film ‘The Necessary Death of Charlie Countryman’ entered the category ‘scraping’ NC-17 after the MPA asked to remove a scene in which Shia Lebouf’s character performed oral sex on Evan Rachel Wood.

At the time, the actress came out to give statements against the organization of film categories.

“After seeing the new cut of ‘Charlie Countryman’ I would like to share my disappointment with the MPA, who thought it was necessary censor the sexuality of women one more time. The scene where the two main characters make ‘love’ was altered because someone thought that seeing a man perform oral sex on a woman would make people uncomfortable“said the actress.

This Franco-Italian film was harshly questioned for having scenes explicit of sexual intercourse.

The film focuses on a young Parisian who meets a man much older than her. He proposes to have a relationship purely sexual.

Among the crudest scenes there is one in which a man abuses a woman by using butter as a lubricant.

Shooting of the movie ‘The last tango in Paris’, directed by Bernardo Bertolucci.

(Can read: Is it John Wick? Reveal first images of Neo in Matrix 4).

‘A Clockwork Orange’, a film released in 1972 and directed by Stanley Kubrick.

The violent band of friends had a great impact worldwide. During its premiere, the producers battled against the censorship, because his scenes were full of sexuality and violence.

The film was listed in the United States in the category X, so its viewing was extremely restricted.

Cubrick had to cut 30 seconds of the film for its release, and only then could he enter the category R.

On United Kingdom, the scenes of violence and sadomasochism were considered extreme and the film was indicated to influence in the murder of a inhabitant of street in London.

Cubrick received threats of death for the influence caused by ‘A Clockwork Orange’.

This film tells the story of a woman addicted to sex. The movie had to be censored in many of his scenes since they were explicit in sexual matters.

Faced with the controversy, the film had two versions: the censored and ‘the other’. What’s more, lead actors sometimes turned to stuntmen from the adult film industry in order to make scenes stronger.

At the time of your premiere, the film was censored in Colombia and Chile.

(We also recommend: The cruel massacres that have inspired great horror movies).

This comedy, crazy as it may seem, also had a censored scene and not shown to the general public for being too crude in sexual matters.

Jennifer Aniston, who plays Dr. Julia Harris, hints at committing abuse against the character played by Charlie Day, who was in a coma.

The scene was removed because it was offensive and disrespectful to those families with fit members delicate medical.

– ‘The baby can come’: Cristina Hurtado spoke about her hospitalization

– The most unusual events that have occurred in TransMilenio and Sitp, in Bogotá

– The reason Chris Carpentier had body paralysis for a month