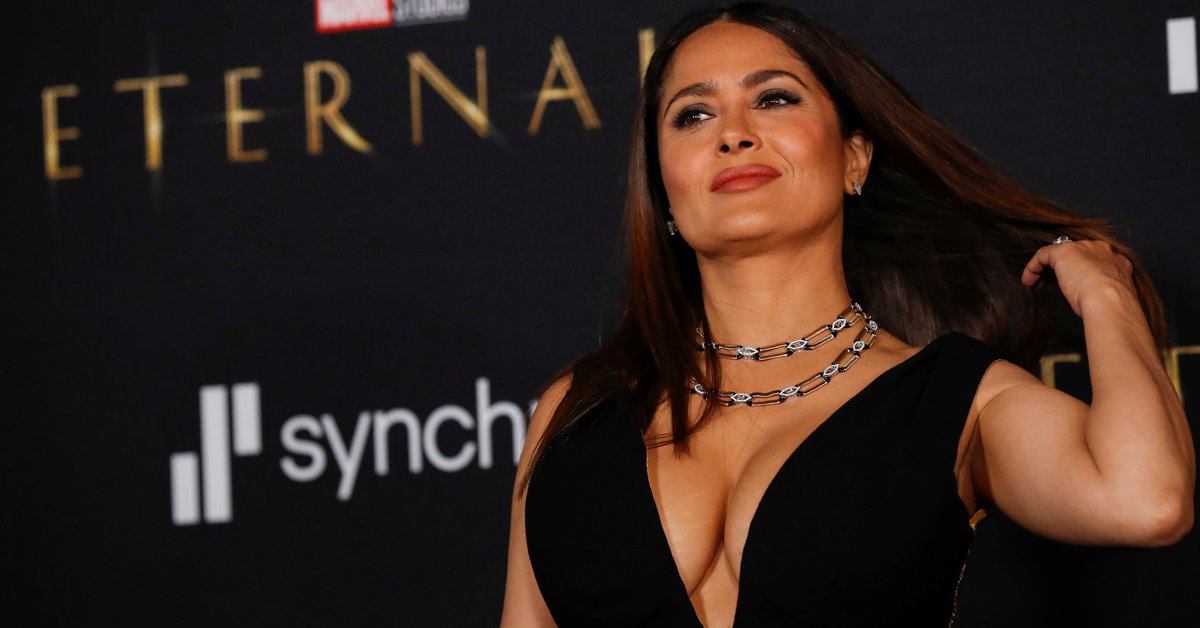 
Salma Hayek and Angelina Jolie were the stars of the world premiere of “Eternals”, The new film in the successful Marvel saga.

The Hollywood Walk of Fame in Los Angeles (USA) was the place chosen for the great “premiere” of this ambitious and long-awaited film that will hit theaters on November 5.

The Mexican Salma Hayek It is one of the capitalized names of its cast and tonight she attended the premiere of the film with a spectacular black dress with a high neckline and golden touches that finished with two sparkling necklaces.

For its part, Angelina Jolie She caught the eye of photographers on the red carpet in an elegant brown dress and a curious adornment on her chin.

Salma Hayek at the premiere of “Eternals” (Photo: Reuters)

Jolie was accompanied at the premiere of “Eternals” by her children Maddox, Vivienne, Knox, Shiloh y Zahara.

Along with Hayek and Jolie, the rest of the cast of “Eternals” were also seen in Los Angeles, including Gemma Chan, Kit Harington, Richard Madden, Kumail Nanjiani and Brian Tyree Henry.

Chloe Zhao, winner of the Oscar for best film and best director for “Nomadland” (2020), is the director of “Eternals” in what represents a significant change of register with respect to her previous works.

Based on the homonymous comic books created by Jack Kirby, “Eternals” focuses on characters with the same name who have extraordinary powers, who are almost immortal and who were created by cosmic beings called Celestials.

In front of the Eternals appear the Deviants, which represent the monstrous and evil branch of the work of the Celestials.

Salma Hayek thought Marvel wanted her for the role of a grandmother in “The Eternals.”

The new project of Marvel, “The Eternals” It has already been listed as the most ambitious yet and with the track record the company has, it is safe to assume that its films will always be action packed. That was why When Salma Hayek heard that the company wanted to meet with her to discuss a role, she did not think what would it be to play a millennial heroine.

According to what the actress told the magazine Entertainment Weekly (THAT ONE), she refused to have a meeting with Marvel, thinking they would want her for the supporting role of some grandmother.

“I said: ‘Forget it‘. I said, ‘God knows what kind of grandma they want me to play.’ I am used to me [digan] that I’m going to be the extra or the old prostitute, ”she told the publication.

However, when the Mexican was informed that Chloe Zhao, recently credited Oscar by “Nomadland”, Would be the director, then she agreed to meet with those in charge of the project.

“Later [me] They said the director was Chloé Zhao, and I said, ‘Okay! Let’s have the meeting! ‘”, confessed the interpreter.

Everything seemed to work excellently, for according to the New York Post, Zhao herself was the one who cast Hayek in the role of “Invite”, A character that in the comics is a man.

The digital edition of the American magazine THAT ONE published ten special covers with the characters of the Marvel film “The Eternals.” Among them, that of the Mexican actress.

From her Instagram account, the actress from Coatzacoalcos, Veracruz, shared the cover and added that she is extremely excited about the premiere of the superhero movie scheduled for November 5 this year.

“After a long wait, I finally feel the arrival of the Eternals approachingSalma wrote in an animation of the cover that at the time of this publication has more than 661 thousand reproductions.

The 54-year-old actress He appeared with the blue suit and helmet with golden details that characterize the character, in addition to a hairstyle with which she wore her wide wavy hair, in a classic pose of the superheroines.

“I am very proud of what you are achieving”, “Beautiful”, “What a thrill”, Magnificent “,” Incredible “, “We are very excited,“ Reina ”,“ Great! I’m expecting a lot ”, were some comments made by his followers on the social network.

In the same way, the entertainment magazine published the covers of Lia McHugh as “Sprite”, Gemma Chan as “Sersi”, Barry Keoghan as “Druig”, Angelina Jolie as “Thena”, Richard Madden as “Ikaris”, Lauren Ridloff as “Mekkari”, Kumail Nanjiani as “Kingo” and Brian Henry as “Phastos”