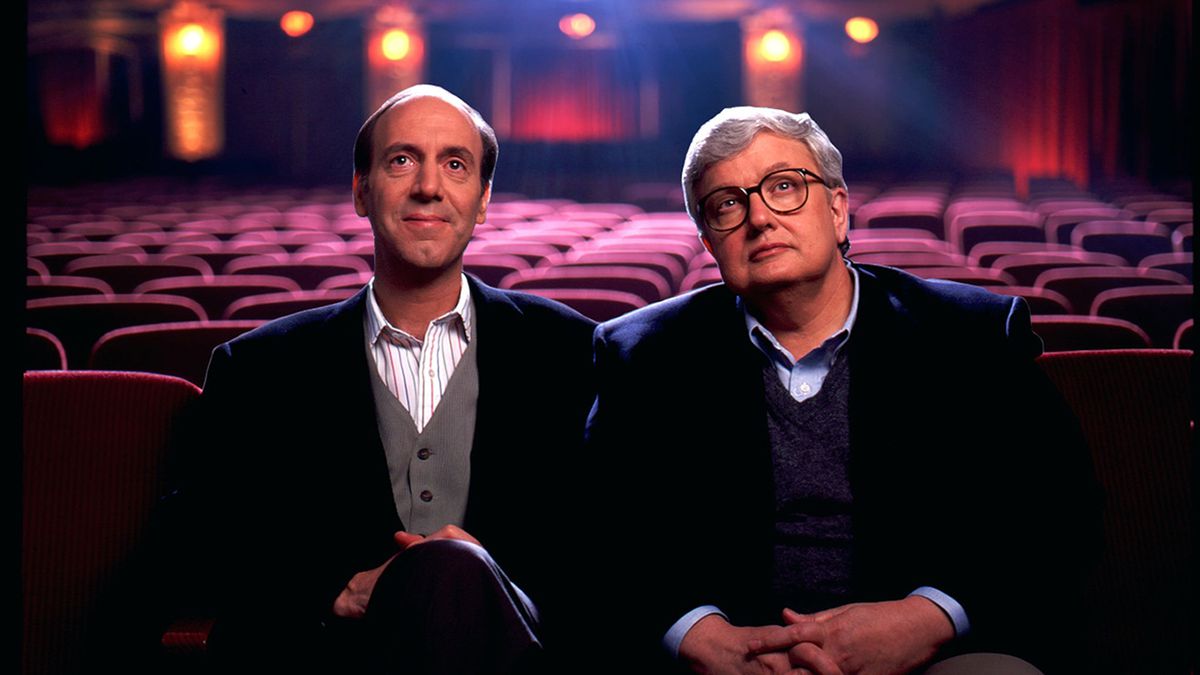 Disagreeing with elegance is an art. Already Roger Ebert (Illinois, 1942-2013) and Gene Siskel (Illinois, 1946-1999) were great at it. The two enjoyed the intellectual fencing of a good talk and had a respectful but scathing, passionate, and very vehement way of disagreeing. That shared quality made them television stars and, in all likelihood, the most celebrated film critics in history.

For a long couple of decades, between September 1975 and February 1999, this pair of learned moviegoers who wrote for rival newspapers (Siskel in the Chicago Tribune, Ebert in the Chicago Sun-Times) dedicated their Sunday afternoons to being the opposite before the cameras. They would meet shortly before dinner time on a set or in an empty screening room, watch snippets of the week’s premieres together, rarely more than five or six per show, and then engage in an exchange of stories. points of view in which there was no truce, largely improvised duels of wit, but with their dose of drama and comedy. Then they issued their verdict with the gesture attributed to ancient emperors in the Roman circus: thumbs up (thumbs up) if they liked the movie and thumbs down (thumbs down) if they had been disappointed.

As Brian Raftery, writer and producer of Gene & Roger, a newly released podcast from the Spotify Original series that pays tribute to this pair of pioneers of the cathodic cultural gathering, “that was it, they never needed anything else.” A relaxed talk about cinema of just half an hour between two rivals and accomplices. No interviews with Hollywood stars, no exclusive trailer shows, no live connections to the red carpets at the Academy Awards or major European festivals. Two men, a stage, and a couple of cameras. But the program, more than a discreet rarity only for fans of the seventh art, became a success, an electrifying spectacle followed week after week by millions of viewers. It began airing on a local Chicago network, WTTW, and in 1982 made the leap to national television. Over the years, it changed its name several times (Sneak Previews, At the Movies, Siskel & Ebert…) with hardly altering its format and was burning stages and gathering an increasingly numerous audience until The Walt Disney Company bought it in 1986 and made it the leader of its time slot.

The rest, as they say, is history. Or legend. That of a television space of an almost spartan austerity, simple in its concept and exemplary in its execution, a masterpiece of a couple of guys who used personality, talent and charisma to turn film criticism into a television product of the first order. To better gauge the magnitude of your achievement, keep in mind that the eighties they were something like the penultimate age of opulence on American television, with Jurassic monsters like the lavish family sagas Dallas, Dynasty O Falcon Crest still on the air, beating copper with the incipient reality programs and the new batch of family comedies, not to mention the increasingly frequent sports broadcasts.

In that context, the 24 years of survival in the elite of Siskel & Ebert they are quite a feat that shows to what extent another television was still possible. Also in Spain at the time, rare flowers germinated, redoubts of that contemporary utopia that was cultural programming, such as The key, that sober gathering led with a master’s hand by Jose Luis Balbín, or (in a more youthful and pop register) The Cristal ball, that morning show that gave a certain intellectual patina to the move and that he treated Spanish children as if they were thinking beings, appealing to their imagination, their intelligence and their sense of aesthetics.

Across the Atlantic Ocean, Siskel and Ebert were on a similar crusade. Little by little, they brought together a very large and frankly transversal audience, in which moviegoers with gray hair and beardless creatures coexisted naturally. In a country that values ​​oral expression as much as the United States, having a couple of such agile, witty and entertaining conversationalists would end up being the central ingredient of the winning recipe. According to Raftery, their secret is that “they taught an entire generation to talk about cinema, to argue their points of view with eloquence and wit, but without arrogance or pedantry.” The two expressed themselves simply, sensibly and accurately, using intuitive analogies and the language of the street. Siskel, bald and lean, alternated exquisite irony with unpredictable outbursts of passion. Ebert, stocky, with thick glasses and a messy head of hair, was the king of concise, sarcastic replies.

Duel of the Titans

The show is best remembered for the moments when Gene and Roger turned their disagreement into a matter of principle and brought out all their dialectical artillery. It happened, for example, in the winter of 1985, in their now legendary exchange of views on Rocky IV. Siskel defended the film with arguments of an unusual indulgence in him: “Although it surprises them, I have loved it Rocky IV. Sure, many think that it is one of the most predictable and routine films in the history of cinema, but the fact is that it gave me a great hour and a half and I enjoyed it from beginning to end. So much so that I’m already looking forward to their premiere Rocky V”. Ebert frowned and replied with indignant forcefulness: “I hope they never release Rocky V. I would rather see Halloween V or a fifth of whatever. Of any film that does not bore me and does not insult me, that is not a pure formula solved without inspiration and with absolute reluctance ”.

Similar Golden Minutes were produced in connection with films such as Joe against the volcano (Ebert found it entertaining, Siskel considered it “absurd and abominable”), The color of the night (Siskel tore it apart so ruthlessly that Ebert made a timid attempt to defend at least Bruce Willis’s performance, but could not quite contain his laughter), Thelma y Louise (masterful for Ebert, mediocre for Siskel) o Apocalipsis Now (Ebert was enthusiastic about it and Siskel, a man who was never afraid to row against the current, found it “a failure of epic dimensions”).

Raftery recalls in his podcast that, despite everything, Roger and Gene had somewhat similar film tastes, so it was quite common for them to agree. They both appreciated great European and Asian auteur cinema, but also Hollywood classics and entertainment pinnacles like Shark, Superman O Star Wars. Many of the premieres they analyzed obtained a unanimous verdict. Two thumbs up could propel the commercial career of a modest film, as happened in 1981 with My night with André, from Louis Malle, which lasted on the bill thanks to the support of the critics couple when it was about to be withdrawn and ended up being the most profitable independent film of the year. Two thumbs down supposed, in the actor’s opinion Eddie Murphy, “Little less than a death sentence.” Burt Reynolds, who frequently suffered from the rigor of this pair of incorruptible judges, came to think that they had something personal against him: “I did not understand how those guys with so much power in the film industry were determined to sabotage my career. All my films seemed infamous to them! It took me a few years to accept that maybe they were right, that I should strive to choose better roles ”.

Not everyone in the industry took the summary judgments of Ebert and Siskel with such grace. Bill Cosby, whose 19987 film Leonard Part 6 deserved one of the most scathing duet rants in memoryHe accused the commentators of “not having understood anything” and of despising popular cinema, asleep as they were, in his opinion, in the laurals of New Hollywood in the mid-1970s. Even Quentin Tarantino, who in later years would come to have an intimate friendship with Ebert, it was difficult for him to accept that the critics of Chicago considered that his first film, Reservoir Dogs (1992), it was a failed effort that failed to live up to the classics of criminal cinema from which it was inspired.

The fact is that Gene and Roger, as the film historian Carrie Rickey recalls, “never married anyone, they always preserved honesty and independent judgment, without the slightest guilty genuflection to the powerful industrial machinery of Hollywood.” On the contrary, “it was the Hollywood Academy that had to adapt to the criteria of this pair of unprejudiced apostles of good taste”, paying more attention to cinema. indie from Steven Soderbergh, Gus Van Sant or the rebel documentary maker Michael Moore, as well as the overwhelming emergence of African-American filmmakers such as Spike Lee (Do what you should was one of Gene and Roger’s fetish films) or John Singleton.

According to Chaz Ebert, Roger’s wife, the peculiar duo became so famous that their agent “recommended that they not separate from each other even to go to the bathroom when they went to festivals and awards ceremonies: he told them that together they were an icon of American popular culture, but one that nobody would recognize separately ”. In 1999, their partnership abruptly and tragically dissolved. Siskel was found to have a malignant brain tumor that made rapid progress in a matter of weeks. In early February, for the first time in more than twenty years, he had to take time off work to undergo emergency treatment.

“I hope to be back very soon,” he said humorously on that occasion. “I don’t want Roger to get used to sucking the camera without anyone being opposed to him.” Very shortly thereafter, on February 20, he passed away at Evanston Hospital, near Chicago. Ebert dedicated a heartfelt elegy to him in his diary: “Gene was a great friend, and our long years of professional rivalry only strengthened that bond. He was passionate, rigorous, and demanding. Our continuous disagreements were a simple child’s play, the essential thing between us was the love and respect that we always had for each other. I can’t imagine how life is going to be without him. “

Roger himself he would pass away 14 years later, in April 2013, after suffering from thyroid cancer that gradually diminished his health and well-being, but failed to make him lose his love of life and his analytical enthusiasm for cinema. Together they wrote one of the most worthy pages in the history of television and film criticism. In Raftery’s words, “I wish we all had a personal Ebert or Siskel in life with whom to relentlessly discuss the things that really excite us.”