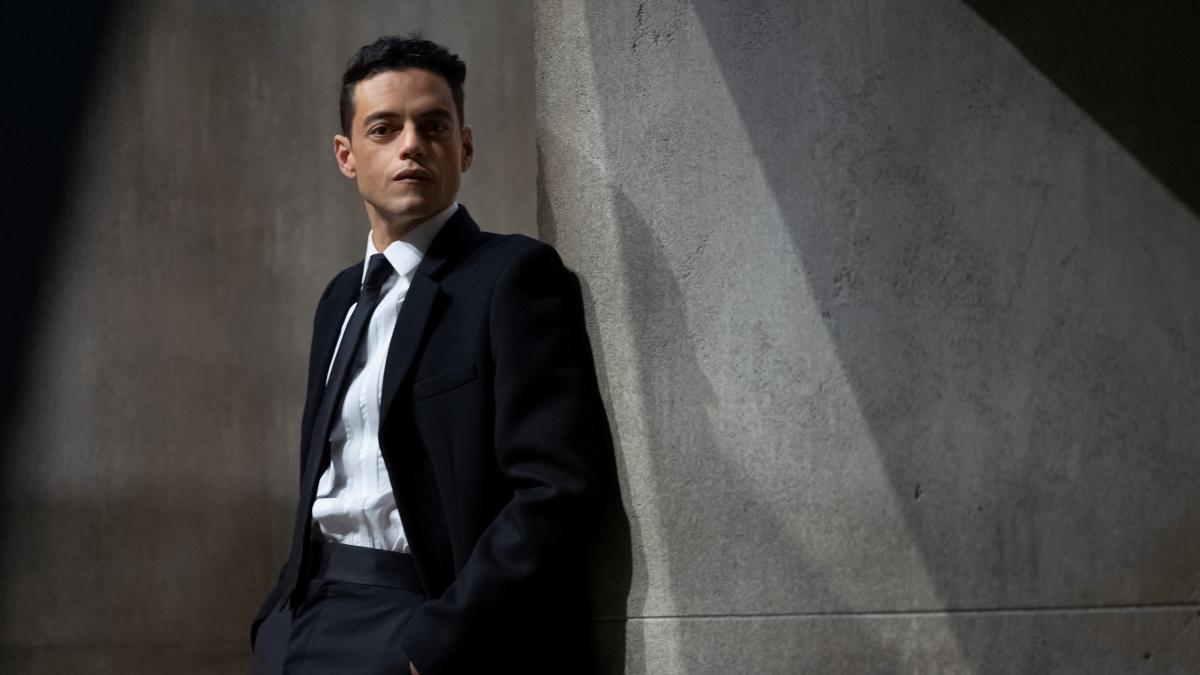 Nobody like Rami Malek, who seems to have a special quality to surround himself with a certain mystery, to keep hidden from the public eyes the traces of Safin, the new villain of the Bond saga, “whom, as a follower of the trajectory on the screen from 007 I have the honor to interpret. Like many of us around the world, I grew up with these films that are part of the backbone of our collective cinematic history. ”

And he has had to keep his mouth shut for quite a few months. No time to die, installment number 25 of the adventures of the character who still has a license to kill, had a release date in 2020, but the health crisis has kept him waiting until these days when returning to theaters is not only safe; also profitable.

Now, finally, he can tell that he represents a being that hides his scarred face behind a Japanese mask, ruthless and manipulative “but with a lot of charm,” he says. Magazine Lifestyle.

“His evil takes forms beyond the confines of stereotypes. He is someone who, in this moment of humanity in which we have had to get used to living with fear, would make us nervous, terrify us and cause us chills and, on the other hand, make us enjoy when we were sitting, with the rest of the public, in a cinema. Also, I think that as things stand, it is important to assume that there is truth to villainy. Something that makes it hideously possible. That’s why those evil ‘mastermind who laughs cunningly’ type movies no longer work. Now you have to be precise when portraying evil “

As things are today, it is important to assume that there is truth in villainy, something that makes it hideously possible. “

After all, to the Oscar, Bafta and Golden Globe winner for masterfully embodying the uncompromising Freddie Mercury in Bohemian Rhapsody, humanity faces, in many ways, a historic moment. “Lyutsifer Safin is that brutal because of the cruelty he experienced as a child and that has been embedded under his skin; he lost his innocence too early in his life so he has a hard time distinguishing what is right and what is wrong, something increasingly common today. But that said, a complex hero like Bond needs an equally complex foe. I think that actors always try to humanize the characters we play in order to understand them and make them understandable, but empathizing with them has been especially difficult. It is pure evil “

Heir to a line of wicked

For Daniel Craig “it was easy to see Rami Malek’s potential as a villain, because in addition to his charisma as a captivating actor, he has a remarkably versatile face. When he lowers his lids, his huge blue eyes look sleepy and cold; if he hollows his cheeks, his jaw sticks out and his cheekbones are raised and he has a low, sonorous voice that can flatten down to a sinister monotonous tone. ”
These are the credentials that have made Malek the heir to a royal line of villains started by Canadian Joseph Wiseman when he played the megalomaniac Dr. No in the first film of the series, back in 1962. This select club includes five winners Oscar: Javier Bardem (Skyfall, 2012), who was a Bafta candidate for his role; Christopher Walken (Panorama to kill, 1985); Christoph Waltz (Spectre, 2015); Benicio, the bull (007 License to kill, 1989) and Malek himself.
In addition, legends such as Christopher Lee (The Man with the Golden Gun, 1974), who was a spy in real life, and such charismatic performers as Richard Kiel, the one with the dangerous teeth, who, in his incarnation of the bad guy named Jaws, participated in The spy who loved me in 1977 and Moonraker in 79.
To this brilliant list are added faces as well known as Sean Bean, the Boromir of the saga of the Rings and popular patriarch of the Starks in Game of Thrones, who was the villain of Goldeneye (1995); Robert Carlyle, the of Full Monty, which did the same in The world is never enough (1999) or the Danish Madds Mikelsen, now so fashionable, that it put 007 in trouble in Casino Royale (2006). And it is that old Europe has been the favorite fishing ground where to fish the evil ones of the franchise: Gert Fröbe, Curt Jürgens, Klaus María Brandauer, Louis Jourdan or Jonathan Pryce also passed through there and left their mark.

If those who have worked with Rami Malek agree on one thing, it is on the meticulousness and obsession with detail of this recent forty-year-old born in Los Angeles, of Egyptian descent, short in stature but long in talent, occasional Dior model, for more than a sweater, dark pants and boots are his usual outfit, which some compare with Sal Mineo, the intense love of the character of James Dean in Rebel without a cause and others with the German Peter Lorre, a secondary with a cloudy and full of intentions, specialized in evil and cowardly women who disputed shots with Humphrey Bogart himself in Casablanca.

When I’m acting something curious happens to me, my senses develop extraordinarily “

“The truth is that when I’m acting something funny happens to me. My senses develop extraordinarily. I can hear every word extraordinarily well; feel deeply every action. I have a hard time doing that in real life. From the actor’s perspective everything is extremely useful; everything counts. You are not saying or doing anything frivolous or unattached. The tone is as important as the message and if you are also lucky enough to work in an environment that respects all that, as has been the case, it is great. Daniel Craig, for example, has been extraordinarily generous and kind. He doesn’t miss one. It is used with dedication and appreciates it when it sees that it is reciprocated. When you walk into someone’s house you have to be extremely respectful and 007 James Bond, it’s Daniel’s house. “

Malik confesses his passion for cinema since he can remember, because, as he explains, “I grew up watching classics and admiring the work of actors and directors. I used to spend a lot of time alone as a kid, creating characters and doing voices in my room, and I thought, “I’m going to go absolutely crazy if I can’t find something to focus all this energy on.”

Characters with a psychotic point, misfits and extravagant, like the one in the series’ Mr. Robot ‘, they attract me especially “

Coming from a not particularly well-off family – his father was a tour guide, his mother an accountant and he has two brothers, one of them his exact twin – he went through the usual path of applicants, from audition to audition “which I did not find particularly disturbing. ; rather, I have always considered them as a testing ground that allows you to know how far you want or can go ”.

The first opportunities came through the small screen in familiar series such as War at home, or the packaging of The Pacific, produced by Spielberg and Tom Hanks. “That poor soldier that I played for them made me grow a lot, in every way. I managed to be calmer and more patient and to look for little-traveled places, in the middle of nowhere, in solitude, to reflect on what was experienced or what was observed ”, he emphasizes.

Mr. Robot, the series in which he played an intense hacker, very intelligent, “misfit and extravagant; Perhaps with a psychotic point that are characters that attract me especially, such as those who make us reflect on certain confusing or unfair aspects of our society ”, he won an Emmy award and was his first great opportunity.

The deep imprint of ‘Bohemian Rhapsody’

“That movie only brought good things”

Adored by fans of the series Twilight, in which he participated playing an Egyptian vampire, as in the franchise Night in the museum incarnated a pharaoh, “clearly the look of my ancestors was there”, completes his filmography coexisting with titles such as The master, by Paul Thomas Anderson the Bohemian Rhapsody, to which he undoubtedly owes his stature as an international celebrity and his relationship with British actress Lucy Boynton, who played the woman Freddie Mercury considered his wife, since they met on the set.
“It only brought good things,” he often stresses when referring to this film. It has been wonderful to be able to represent such a charismatic leader who struggled to discover his identity and who felt different from the others, but who, at a microphone, was as happy as I am when working on camera. We both feel in those moments a security that we do not have in our real life where we are rather shy and lonely. There is something in me that appears at certain moments of which I am extremely proud. Finding a part of you where you expected it to be is always deeply moving “

“Let’s see, nothing can match what you feel walking through the 007 sets at Pinewood Studios, seeing the scale designs of some places, the incredible lighting, all the work done by some of the best artisans in our industry. It is, in itself, a spectacle and it makes you very sad to see how all that is destroyed almost immediately after filming them! There is no possible comparison with working on television, but the two areas of work are interesting to me because, when it comes to telling stories well, the complexities of big shoots affect only to a certain extent. In the movies you have the freedom to work on the details, the psychology and be more risky, but on television you have time to delve into the character throughout the chapters and you don’t have to solve everything in the day ”.

The next step in Rami Malek’s career, regarding which no one has doubts about his future brilliance, is this one-on-one, or this one face-to-face, with another legend “and I am extremely curious to know where he is right now a movie like this; what Bond means in 2021. Having been at the center of so many conversations about this, I am eager to see how it is received. And I am also interested in knowing if it provokes a reflection on the use of technology, which my character puts at his service, to achieve his ends and how much it has modified our lives, starting with our forms of communication. Sometimes I think we are more connected than ever, in the most alienating way possible … ”