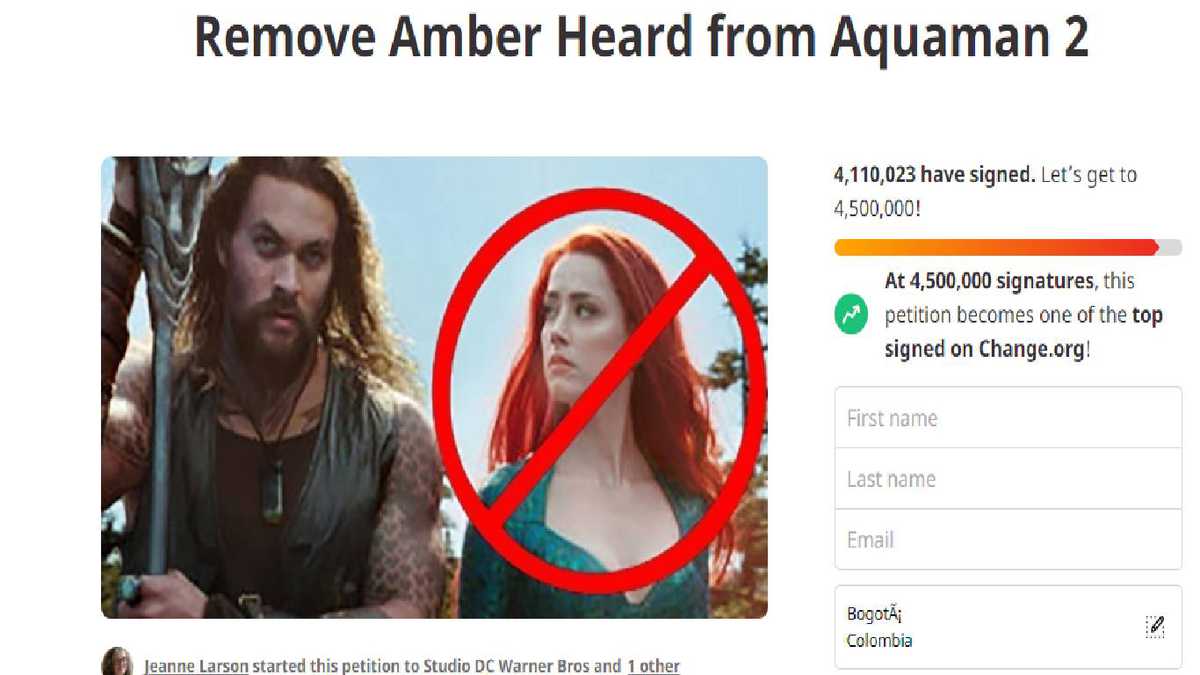 On the Change.org platform, a request is made for actress Amber Heard to be separated from her role as Princess Mera in the movie ‘Aquaman’, which in a short time has had an acceptance of netizens to this date (May 14) adds more than 4 million signatures.

Amber Heard continues with the legal battle with Johnny Depp, which has generated the rejection of the fans of the film, but this has not been enough for her departure, as Warner has not ruled on separating the actress from her performance.

Jeanne Larson, a UK citizen who started the petition, writes in the petition that Heard had already been “exposed as a domestic abuser” and that canceling her appearance in that film would prevent her alleged abuse from getting more media exposure than it does. right now.

At the end of April the petition reached two million signatures, but in May that figure doubled and the discontent of millions of fans with Heard is striking.

In the middle of the trial, a psychologist hired by Johnny’s lawyers declared that Amber suffers from personality disorders. Shannon Curry, a clinical and forensic psychologist, claimed to have personally examined Heard’s mental health for 12 hours over two days in December 2021.

Curry estimates that the 36-year-old actress, who starred in the film ‘Aquaman’have borderline personality disorder and a histrionic disorder. “He got results consistent with these diagnoses,” Curry said.

Heard’s attorneys attempted to discredit Curry’s testimony during cross-examination and they noted that Depp’s lawyers had hired her to testify on his behalf. “If I didn’t find something favorable to Depp and negative to Heard, would she be the expert in this case?” asked Elaine Bredehoft, Heard’s attorney. “I represent science, regardless of what that science is,” Curry replied.

The psychologist said that some of the main features of borderline personality disorder include “a lot of internal anger and hostility”, a tendency to be “moralistic” and “fluctuating moods”. “They can react violently, they can react physically“, said. “They will often be abusive to their partners. It’s almost an act.”

According to ‘Forbes’, Amber Heard would have been fired from the new ‘Aquaman’ movie

After the social and legal uproar that was unleashed by the trial between Amber Heard and Johnny Depp, and after the revelations that led to ruling in favor of the actor, Some media have already enunciated the alleged effects that the legal mess has left on the renowned interpreter of Mera in ‘Aquaman’, role that he would not play in the next version of this film.

It is noteworthy that a few weeks ago it has been carrying out a signature collection initiative by Jeanne Larson, a citizen of the United Kingdom, who writes in the same that Heard had already been “exposed as a domestic abuser” and that canceling her appearance in said film would prevent her alleged abuse from having more media exposure than it has right now. This project has already passed four million signatures.

Well, after it was reported that the role of the actress had been reduced to 10 minutes in total, Forbes assured that the American company Warner Bros. decided to remove Heard from the role completely and would be looking for another artist to play the role of Mera.

On the other hand, a project that began in 2020 and that seeks to put Emilia Clarke to replace Amber Heard in ‘Aquaman 2′, would be gaining strength; even, Forbes He also revealed that the ‘Game of Thrones’ actress would be chosen for the role of Mera.

‘Aquaman and the Lost Kingdom’, the second installment of this series, which will continue, is expected to hit the big screen in March 2023. starring Jason Momoa, and the story will focus on the story of this aquatic hero who will face Black Manta.