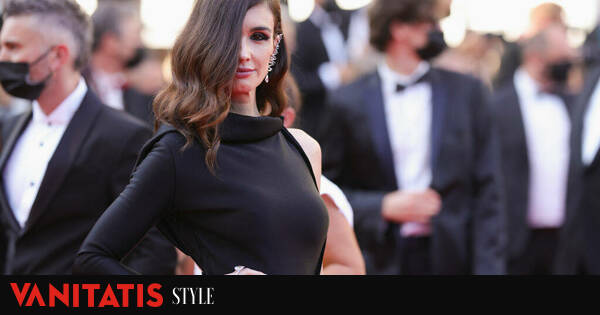 After a year canceled due to the pandemic, the Cannes festival is back, finally, to roll out its red carpet to the delight of all lovers, not only of cinema, but of fashion.

In this 74th edition and without leaving behind the strong sanitary security measures, the stars shine again on this long-awaited carpet with their best looks, and actress Paz Vega It has been one of the well-known faces that has stepped on it with force, with two striking styles.

This Saturday, July 10, Vega left those present breathless when going to the screening of ‘De Son Vivant (Peaceful)’ with a spectacular asymmetrical black dress by Nicolas Jebran with opening on the side of the body, adorned with moldings, and on the skirt, long sleeves on the right arm and strap on the left.

Paz posed for photographers Jessica Rabbit style. Wearing a hairstyle with flowing hair that was watering and grating to the side, in the Hollywood style of the 50s, she showed a spectacular and zigzag Messika earring that covered her ear from start to finish. She completed the look with high-heeled pumps in black.

It was not the only celebrity who opted for black for this premiere. Carla BruniFor example, she also opted for a very sexy dress, with a strapless neckline, fitted and with a long skirt. Saint Laurent, the same firm that he opted for model Anja Rubik, who wore a black strapless dress with feather trim on the neckline and skirt.

A black slip dress from Etro, it was the bet of the model Taylor Hill.

And if this time, Paz Vega bet on black, hours before he did it on white, posing at the photocall before attending the Chopard Trophy dinner, a recognition award given in each section of the Cannes Film Festival.

This time, Vega wore a very sophisticated look when opting for a white tuxedo with black lapels and pronounced V neckline. Like the black dress he wore the next day, this tuxedo is a design by Nicolas Jebran.

This time, her hair was tied up in a low bun with a side parting. He highlighted, in addition to the two-piece suit, a striking white snake-shaped belt and a wide necklace of precious stones and pearls. She completed the look with some high-heeled black sandals.

We love to see the Sevillian actress in these types of festivals, where she knows how to display all her charm with strong stylistic bets that never leave anyone indifferent.

Just a month ago, at the Malaga festival, Paz had a very important premiere for her. This time because that was the occasion chosen by the actress to accompany her daughter Ava on her rise to fame for the movie ‘The snail house’, directed by new director Macarena Astorga. Also on that occasion, the Sevillian opted for what is undoubtedly one of her fetish colors: black, a tone with which he is always right and that it feels great. Paz Vega looked very pretty in a custom-made black set, with a strapless top in taffeta with ruffles, pleated mikado trousers and a patent leather belt. A design of the marca de The 2nd Skin Co which he combined with minimal sandals in the same color.

Paz Vega is one of the most international actresses that the Spanish quarry has given. He has lived in Los Angeles for 14 years. “It can be said that I like challenges,” he recently confessed to this medium. In an interview.

Some time ago, he decided to pack his suitcase to return to Spain with her husband Orson and their three children.