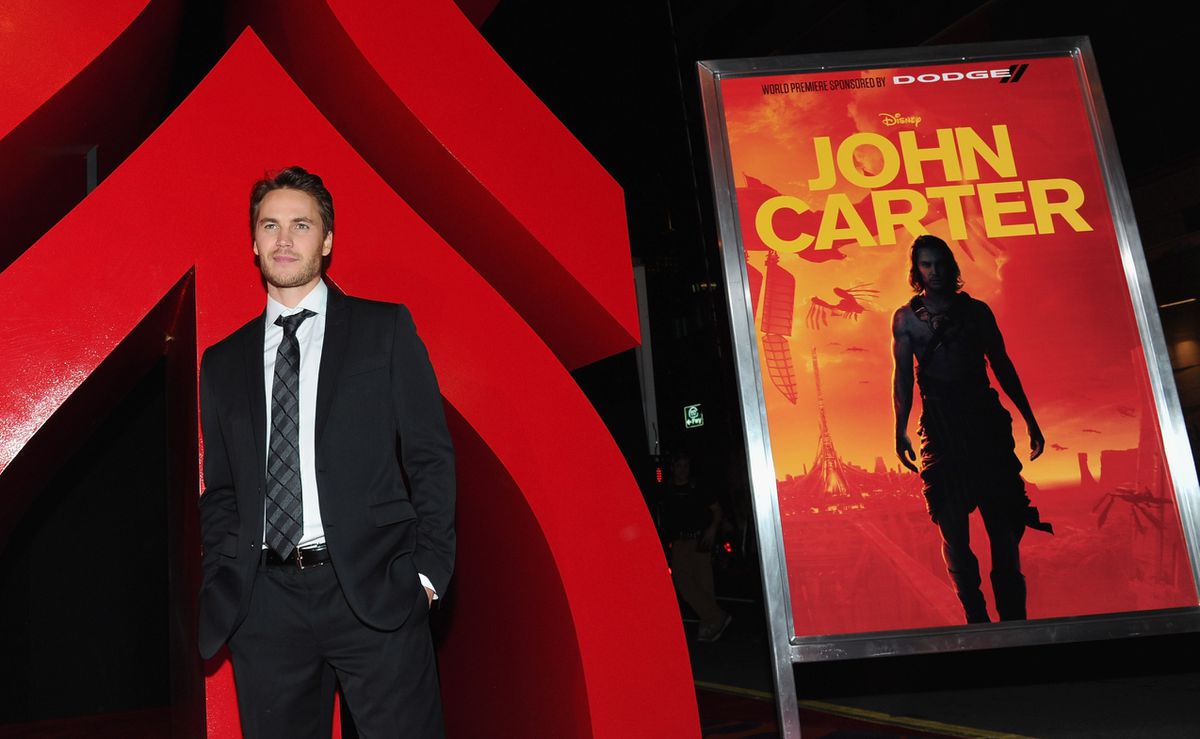 If we ask you where you were on March 11, 2012, the answer is most likely not “at the movies watching John Carter.” Otherwise, you would be one of the few viewers who gave Disney a joy. With some losses media such as CNN estimated at 200 million dollars (more than 180 million euros), what was going to be the blockbuster of the year became one of the studio’s biggest flops. The curious thing is that the reasons for his debacle were not the usual ones: not a chaotic production plagued by incidents as it happened in water world (1995), nor the fight of egos between its stars (and some witchcraft) that took ahead of The Island of Doctor Moreau (1997), nor the tons of whiskey and cocaine that ruined the Popeye (1981) by Robert Altman. Quite the opposite: in John Carter the problem was the excessive respect that Disney showed for its director and the laxity of inexperienced executives. But who was going to argue with Andrew Staton, one of Disney’s greatest assets after the success of WALL E (2008) and Finding Nemo (2003). Nobody wanted to disturb the star of pixarthe real goose that lays the golden eggs of the conglomerate.

The problems started with the concept. What for Disney was a block buster Destined to form a new galactic saga of which two more installments had already been scheduled, for Stanton it meant the dream of a lifetime. He worked on her as if he were standing before Batman without considering that the rest of the world had no idea who John Carter was. “He wouldn’t listen to any idea that someone might not know who John Carter was. He is not Frankenstein, he is not Sherlock Holmes, nobody cares! No one says, ‘I know what I’m going to dress up as for Halloween! I’ll be John Carter!” anonymously declared one of the executives of the company to vulture before the premiere.

John Carter is a character of Edgar Rice Burroughs, creator of tarzan. A confederate soldier who, after apparently dying, is reborn on Mars, where he finds himself immersed in a struggle between two opposing races for control of the planet while he falls in love with a Martian princess. It was first serialized in 1912 and has influenced almost every fantasy saga we know of. starwars would be inconceivable without John Carter. A desert planet, a gunslinger and a princess who fall in love… does that ring a bell? Now replace the desert planet with a leafy planet: yes, indeed, Avatar. Neither george lucas neither james cameron they have never denied that the work of Burroughs has been essential in their works. So how can it be that a novel that inspired two of the biggest blockbusters in history couldn’t inspire itself?

Eighty years in the making

The Adventures of John Carter had been circulating in Hollywood offices since the 1930s. So the director of the looney tunes, Bob Clampett, asked Burroughs to turn them into an animated film that never saw the light of day. Like the later interest of the animation teacher Ray Harryhausen. It was in the 1990s when it came closest to being carried out with names like John McTiernan, director of the jungle of glass, Tom Cruise and Julia Robertsbut the technical complexity of the project made McTiernan give up and opt for the last great hero (1993), by the way another millionaire failure. Julia Roberts also forgot about it, but Cruise continued to keep her interested.

After McTiernan, Robert Rodríguez and Jon Favreau would leave the project, who would end up changing it for Hombre de Hierro. And, finally, it reached the hands of Andrew Stanton. “I have spent my whole life wishing that someone would shoot it and when I started working in the industry, since the nineties, every rumor that it could be done made me excited and thought: I will be the first in line at the cinema”, Andrew Stanton confessed to TheWrap. “I never had the arrogance to think it was something I would want to or could do.”

Once the director was confirmed, the protagonists had to be chosen. And what in other projects is usually the most complex part, for Stanton it was the simplest: he was convinced that the Canadian actor and model taylor kitsch he was the physical embodiment of Carter. Kitsch became known as the charismatic American football player Tim Riggins in friday night lights (2006-2011) and Gambit in X-Men Origins: Wolverine (2009). But Cruise kept hovering around the project. It’s easy to think that Disney was rubbing its hands over a franchise starring Tom Cruise, but Stanton was in control. “I already had Taylor in mind when Tom made his interest known. He already knew the material, so I wasn’t surprised to find that he was still interested,” Stanton recalled. “We agreed to talk further if I passed on Taylor, but obviously I didn’t.” To play Princess Dejah they chose Lynn Collins who had already coincided with Kitsch in the saga X Men. The protagonists were not flashy stars, but they would be well equipped with supporting characters such as Willem DafoeSamantha Morton and Bryan Craston. The Pulitzer Prize Michael Chabondevoted like Stanton to the adventures of Carter, would be in charge of the script.

With the team selected and filming underway, problems began to arise due to issues such as its title. The logical name would have been a princess from mars, the original title of the first novel in the literary series, but Stanton admitted that with that name “not a single boy would go” to the movies. He opted for John Carter of Mars (John Carter of Mars). But Disney marketing president MT Carney, a newcomer to the industry with no prior film experience, decided that too many movies with Mars in the title had been released in recent years that had flopped. (Mission to Mars and Red planet in 2000, Mars needs mothers in 2011). In a meeting attended by Staton and Chabon, Carney decided that he would be called simply John Carter. The writer remembers him in TheWrap: “That was the first moment I thought we had problems. From that meeting until the movie came out, there was nothing good.”

That “nothing good” is being subtle. The next wrong decision came from Stanton, who decided not to include in the teaser references to his successes at Pixar in the film, so that the public would not think that it was a production aimed at children. There was also no mention of Burroughs or Chabon, who was at the height of his popularity at the time. Nor was any powerful sequence included, the element on which the teasernor a shot of Woola, Carter’s Martian dog, “the most distinctive visual element of the film”, according to vulture, who dedicated an entire report to him. A Baby Yoda in power.

The teaser I bet everything on the character. Stanton still thought the film would sell on name alone, but no one knew who John Carter was, at least not the hundreds of thousands of viewers it would have taken to justify the production budget. And the images selected by the director were too reminiscent of movies that everyone wanted to forget, like The Prince of Persia (2010) and wild wild west (1999). “This is one of the worst marketing campaigns in the history of cinema. It’s almost like they’re going out of their way to ignore us.” declared a former head of marketing for the studio to Vulture during filming.

When the night of the opening arrived, in February 2012, its protagonists were the only ones who were unaware that the film had already failed. It wasn’t his job’s fault. Not even that the public would not have liked the film. It just seemed like no one wanted to see her. Collins recalled in TheWrap his sad step on the red carpet. “It’s going to be a fucking disaster,” Kitch whispered. His representative explained that she was going to be the culprit “You are going to have to disappear because you are the one who is going to receive the anger for this. Business is like that.” Fortunately, no one blamed her because all the criticism was focused on marketing errors, the result of inexperienced executives who disappeared from Disney after the failure, and on the freedom that an inexperienced director outside of animation cinema had enjoyed.

With a budget of 250 million, in its first weekend barely raised 30less than half of what would have been considered a minimally acceptable result and failed to unseat Lorax. In search of the lost trufula. Stanton was the one who came out better: his next film, Finding Dory, It surpassed one billion at the box office. Taylor Kitsch relived his particular groundhog day after the failure of his next great production Battleship: Naval Battle and, at a more discreet level, with the collapse of the second part of true sleuth. Her name went on to head the list of star projects leading big failures alongside those of Brandon Routh (Superman Returns, 2006) or Sam Worthington (Avatar, 2009). Lynn Collins, who gave the most lauded performance in the film, found refuge in television. And she fired her manager.

Ten years later, John Carter it is still considered a monument to failure, but not a bad movie. “Maybe John Carter It’s not perfect, but it’s a movie where you can safely shell out the money, grab the popcorn, and walk away reasonably satisfied when the end credits roll.” critic Charlie McCollum wrote. Time seems to have given him a certain reason: his incorporation into the Netflix catalog a couple of years ago renewed interest in the adventures of Carter and this week it has been announced the development of the first video game dedicated to the character. Perhaps the planned sequels can be a reality one day.

“One of the worst campaigns in film history”: ‘John Carter’, the nightmare of 200 million for Disney