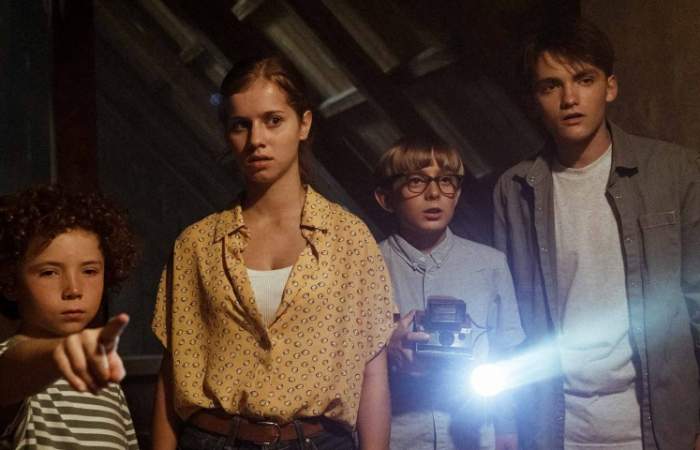 Yet another movie about a haunted house? Yes, another one, although it must be said that Sinister walls It comes with a couple of peculiarities.

The first is that its realization is very far from Hollywood, more precisely in Austria, country of origin of this film directed by Daniel Prochaska and which has just been released around the world by the hand of Netflix.

And the second is that although it is a horror story, is addressed to a family and adolescent audience, which is what the illustrated book on which it is based pointed, Das schaurige uausby Martina Wildner and Anke Kuhl.

Precisely a group of children and adolescents are the protagonists of Sinister walls, the ones that meet in Eisenkappel, a small Austrian town near the Slovenian border.

So far a German family comes to live, which is made up of Sabina (Julia Koschitz) and two children, the little Eddi (Benno Rosskopfy) and the adolescent Hendrik (Leon Orlandianyi).

As they come from a big city, at first their children do not see the change in that small city in a good way. Even more so when they start to happen supernatural events in the house where they now live.

A mystery to solve

The first to experience things with no apparent explanation is Eddi, who writes the word “mushrooms” on the wall and begins to pronounce phrases in Slovenian without knowing that language. Then Hendrik also begins to suffer strange behaviors.

Later, the young man learns that a tragic event happened in that house: the death of two children, similar in age to his and his brother, who were allegedly murdered by their mother, Amalia Polzmann.

That would explain the series of paranormal events that occur in the house and that Hendrick begins to investigate with two other teenagers from the town, Ida (Marii Weichsler) and Fritz (Lars Bitterlich).

Both for its history and its atmosphere, Sinister walls remembers immediately – keeping the proportions, yes – to the successful series Stranger thingsBecause both are set in a small town, where paranormal events take place and a group of teenagers begin to investigate.

Solving mysteries with a touch of humor and some romance also leads to thinking about the adventures of Scooby Doo (although they are missing a dog on their team).

There are even nods to another popular Netflix series, Dark, not only in the German origin of the brothers, but also in a suspenseful scene inside a cave and in which Ida and Hendrick wear yellow rain jackets very similar to those of Jonas (the one in the photo above).

And although terror does not abound in Psinister aredes, throughout its almost 100 minutes it does offer a good share of entertainment, the one that will hook, especially the adolescent public.