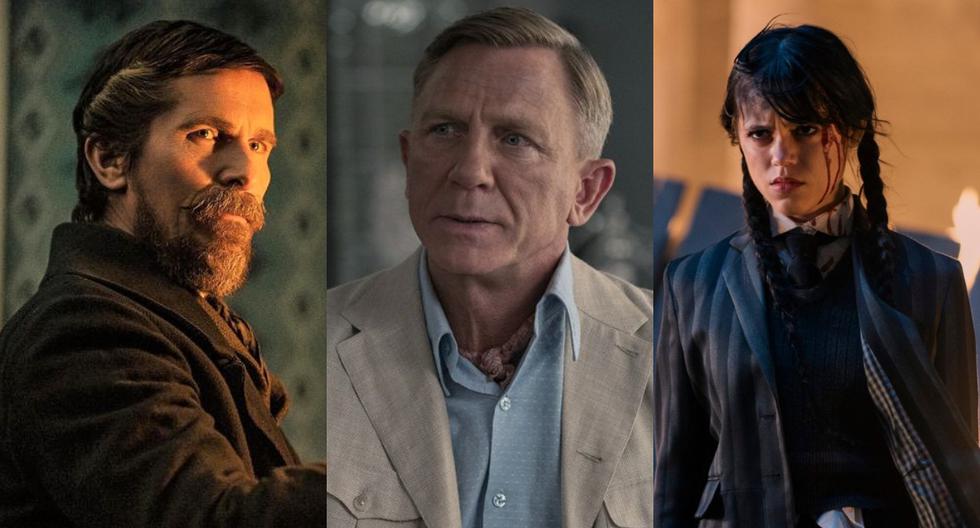 Netflix had a successful 2022 thanks to tapes like “Glass Onion: A Knives Out Mystery” and series like “merlin”. Despite the fact that a short time has passed since its launch, some of these productions continue in the Top 10 of the most viewed by users of the platform in the first week of 2023.

But those are not the only movies or series that have captivated the public these days. Here we leave you a review of the most viewed releases between Monday 2 and Sunday 8 January 2023 worldwide.

With a total of 44 million hours viewed and three weeks in the global Top 10, “Glass Onion: A Knives Out Mystery” is the most viewed film in the first week of 2023. Next, are the films “The Mysteries of the Academy” (“The Pale Blue Eye”) and “Jumanji: The Next Level.” In fourth and fifth position are “Matilda: The Musical” and “White Noise” (“Background noise”), respectively.

“Honest Thief”, “Sing” and “Knives Out” are the films that follow in the Top 10. While, finally, we have “Hard Target 2” and “Trolls”, the animated film that remains in this important list for three weeks with more than 6.5 million hours viewed.

On the side of the most viewed series during the first week of January we have, in first place, the second season of “Ginny & Georgia” with a total of 180 million cumulative hours of viewing. In second place is “Caleidoscope” and, immediately after, “Merlina” -a series that has been in the Netflix Top 10 worldwide for seven weeks-.

The list of the most watched series worldwide is completed by season three of “Emily in Paris”, the first season of “Ginny & Georgia” and “The Recruit”, “MADOFF: The Monster of Wall Street”, “Treason ”, “The Witcher: Blood Origin” and “New Amsterdam”.

In relation to non-English-speaking film productions, the first place in the Top 10 shared by Netflix is ​​held by the Polish film “How I Became a Gangster”, starring Marcin Kowalczyk and Tomasz Wlosok. The second place is occupied by the Indonesian “The Raid 2″; while the next film on the list is “Mili”, directed by Mathukutty Xavier.

While “The Kings of the World”, “Troll”, “Gatta Kusthi” and “God’s Crooked Lines” accumulate more than 3 million hours viewed each. The last three Netflix Top 10 spots go to “Double XL,” “7 Women and a Murder” and “All Quiet on the Western Front,” respectively.

As for non-English-language series, Netflix’s Top 10 is led by “The Glory,” followed by “Queen of the South” season three and “Alice in Borderland” season two. Thanks to streaming users, “Lady Voyeur” and “Woman of the Dead” rank fourth and fifth on this list.

The next most viewed series in the first week of January are “Alchemy of Souls: Part 2″, the first season of “Alice in Borderland”, “Alpha Males”, “Single’s Inferno: season two” and, finally, the second installment from “Love Is Blind: Brazil”.

How is the Top10 in Peru doing?

In our country, between January 2 and 8, the film that has positioned itself as the most watched is “Jumanji: The Next Level”, starring Dwayne Johnson and Kevin Hart. The next film on the list is “Relentless Revenge,” which remains in the Top 10 for the second week in a row; while the third place is occupied by the animated tape “Sing”.

Meanwhile, the list continues with “Prisoner 99”, “Operation Hunt 2”, “The crimes of the academy” and “Matilda: The Musical”, which has been in the Top 10 in Peru for two weeks. “Pinocchio” by Guillermo del Toro is another of the films that surprises by remaining for five weeks among the most viewed by users of the streaming service. Finally, there are the films “Vengeance” and “Ad Astra: Towards the stars”.

Regarding the series section, the third season of “La Reina del Sur” ranks first among the most viewed during this first week of 2023. In this way, said production remains in the Top 10 in Peru for two weeks . The next production on the list is “Merlina”, starring Jenna Ortega and directed by Tim Burton, which has been among the most watched for seven weeks so far.

For its part, “Hasta que la plata nos separe” is in third place on the list and has remained in the Top 10 Peru for twelve weeks. “Ginny and Georgia” season two, “Kaleidoscope,” “Hajime no Ippo: The Fighting!” and “La Gloria” are next on the list.

Finally, there are the second season of “Alice in Borderland”, “The Unbroken Voice” and the first season of “La Reina del Sur”.

Netflix Top 10: what are the most watched series and movies in the first week of 2023?

Rumor: Johnny Depp is in talks to star in Beetlejuice 2 | tomatoes
The 10 cursed movies that were never released
"It's a horror movie". A woman hospitalized for COVID-19 returns home to find her husband dead