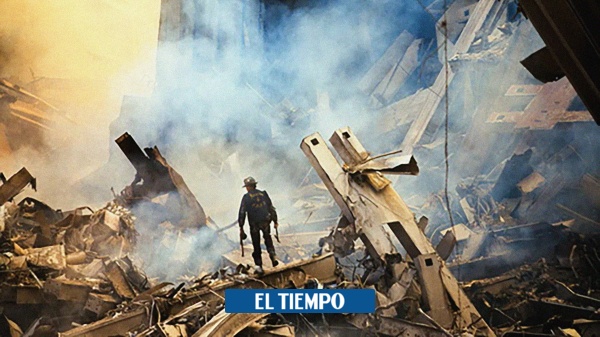 “There is fire in the Twin Towers, a plane has just hit them … We do not know what happens” was the nervous phrase of a journalist who narrated the first moments of what is known as the largest terrorist attack against the United States.
​
A few minutes later, a second aircraft crashed into the other tower, and the chaos and despair increased. September 11 2001 changed the world and left a fatal toll of three thousand dead.

That phrase from the confused announcer is also the turning point of the documentary What happened on September 11, a 2019 production that tried – like hundreds of documentaries, series and films – to try to understand the inexplicable.

What happened on September 11 (available on the HBO Max platform) offers a slightly different look at the attack; offers another point of view. The first images offer a vibrant capital of the world that pulses between its urban madness and is the scene of power, wealth and diversity, but everything is broken with those of the explosions of the planes, the firefighters running through smoke, debris and a population that felt the true fear.

The documentary contrasts that fear with testimonies of children today who speak of the subject, and even with artistic explorations.

This Saturday, when two decades of the attack on the twin towersNot only will millions bring back the memory of where they were when it happened, or where they saw it, but images of destruction and bewilderment will reappear, with which most newscasts filled their broadcasts all day. Impressive videos of the explosions, the battle of the rescue teams and the death in a jump into the void of those who could not be rescued.

It is also remembered for its impact on New York society.

Images that were repeated over and over again in a time when the internet was still something new and social networks did not exist. However, now it is possible to remember or analyze what happened in a broader wake, thanks to films, series and documentaries that have explored that moment and have delved into its consequences.

The first one that ventured was 11’09”01 – September 11, a production of shorts by Samira Makhmalbaf, Claude Lelouch, Youssef Chahine, Danis Tanovic, Idrisa Uedraogo, Ken Loach, Alejandro González Iñárritu, Amos Gitaï, Mira Nair, Shohei Imamura and Sean Penn, which achieved one of the most beautiful stories within a atmosphere of tragedy.

Its short is starring Ernest Borgnine and tells the story of an older man who, after the collapse of the Towers, sees how a new sunlight illuminates his loneliness.

An interesting twist of the event in a visual experience, almost experimental, that was released a year after the attack.

Two years later the feature films were released Flight 93 and The Twin Towers. The first was directed by Paul Greengrass, who focused his story on the heroism of the passengers of a fourth hijacked plane that was to be used for another attack. While Oliver Stone decided to work on the second – if you like, more epic – recounting the adventure of two police officers who are trapped in the rubble while trying to save those who were in the building.

Nicolas cage and Michael Peña starred in this project in which the character played by Peña (Will Jimeno) was born in Barranquilla in 1967 but grew up in the United States. Both movies are available on Netflix.

(Can read: Will Jimeno, the Colombian who survived the attack on the Twin Towers).

In the section –about the consequences and other approaches– we must also highlight The Report, a film with Adam Driver and Annette Bening and that spoke of the abuses committed after the September 11 attacks, specifically in the investigations and interrogations carried out by the CIA. The production is available on Amazon Prime Video, as is the miniseries The Looming Tower, which delves into the information that intelligence teams had on Osama bin Laden (mastermind of the attack), three years before the terrorist act.

Another unavoidable is The darkest night (2012), directed by Kathryn Bigelow and which reveals how was the hunt for Bin Laden by a US commando in Pakistan.

As well as How much is life worth? with Michael Keaton and Stanley Tucci, on the battle of Kenneth Feinberg (Keaton), a lawyer who faces bureaucracy and the lack of humanity in the handling of public funds oriented to the victims of the attack.

In addition to the proposal of Inflection point: 11S The War on Terror, which analyzes a conflict that has grown since the 1980s. All three are available on Netflix.

The documentary 9/11: Inside the President’s War Room –From Apple TV + and directed by Adam Wishart–, it follows President George W. Bush and the behind the scenes of the initial shock and the president’s conversations with his vice president, Dick Chenney and his security adviser, Condoleezza Rice.

“There has been a lot of writing and productionBut, without a doubt, another issue that seems fundamental to me is: what were the consequences in the generation and in the fight against new terrorist cells? Clearly, all this was a manifestation of something that had been happening underground many years before, “recalled Richard Eichen, a survivor of the attack and who offers his testimony in one of the five specials that will also premiere on Saturday 11 and Sunday 12 September History Channel.

(You may be interested in: ‘I survived 9/11 because I came later to work at the Twin Towers’)

It is a panorama that offers conspiracy theories; September 11: The four flights; Rise and fall of the Twin Towers; 9/11: Attack on the Pentagon and The hunt for bin Laden.

The first tries to answer, for example, if a series of controlled detonations they could have been the crucial factor in the fall of the Twin Towers.

At the same time, September 11: The four flights records the fateful journey of each of these voyages through the stark tale of those who had heroic roles at the mercy of the terrorists on board.

Rise and fall of the World Trade Center part of a very powerful question: why did the buildings fall so fast? He analyzes the engineering of the double mass of just over 400 meters high and collects testimonies from experts of the construction and design to reveal wonders and vulnerabilities of these buildings.

Sixty years before the attack on the Twin Towers (and three months before the invasion of Pearl Harbor, in December 1941), the United States War Department began the construction of the Pentagon, which is the protagonist in 9/11: Attack on the Pentagon.

While The hunt for bin Laden it also narrates the details of the operation to catch the leader of Al Qaeda. The productions will be broadcast this Saturday, September 11 (from 6:20 pm) and on Sunday from 8:10 pm

The 2 scientific causes why the Twin Towers fell