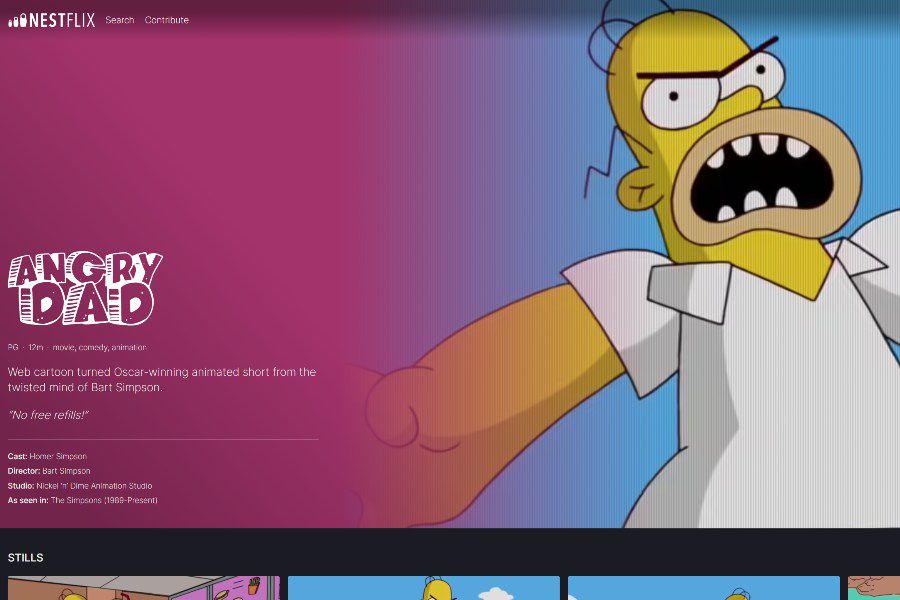 If since they followed Entourage have wanted to see the Aquaman movie starring Vincent Chase or after seeing Community they were always curious about the plot of Kickpuncher, Nestflix It is the alternative they were looking for to feel a little more within the world of their favorite productions.

While the well-known streaming service behind Stanger Things It’s called Netflix, this new platform called Nestflix is an invention of designer Lynn Fisher and basically seeks to apply the premise of Netflix to show a great catalog of movies and series that were invented by real movies and series.

Thus, when browsing Nestflix you can find a lot of movies or series that have appeared in The Simpson What Angry dad and the Show de Tomy y Daly, passing by Philbert, Birthday Dad Y Horsin’ Around of the world of BoJack Horseman, up to Woody’s show Toy Story 2.

All while it can also be reviewed from Rick Dalton’s collection of Once Upon a Time in Hollywood to the Lucas Lee collection taken directly from Scott Pilgrim vs. the World.

And while there are references to newer bets like Katie’s home movies on The Mitchells vs. the Machines, there is also the inevitable movie that Kevin McCallister saw in My poor angel: Angels with Filthy Souls.

Unfortunately, as none of these productions are real, they cannot be seen. However, the premise of Nestflix allows them to be viewed with various details that include their cast in addition to the production that presented them and even photos if they exist. In fact, the platform even suggests similar titles and has a search engine.

According to its creator’s announcement tweet, Nestflix has more than 400 titles and it will likely expand over the next several months as Fisher assured that due to considerable interest, he will not be getting any more suggestions for a while. Regarding intellectual property, Fisher argues that this “it’s just a wiki doing cosplay ”, so we will have to hope that no one wants to cancel this curious alternative to review fake movies and series.

The Nestflix catalog includes nods to a lot of series and movies, so if you want to look for your favorite fake project you can check the platform at this link.