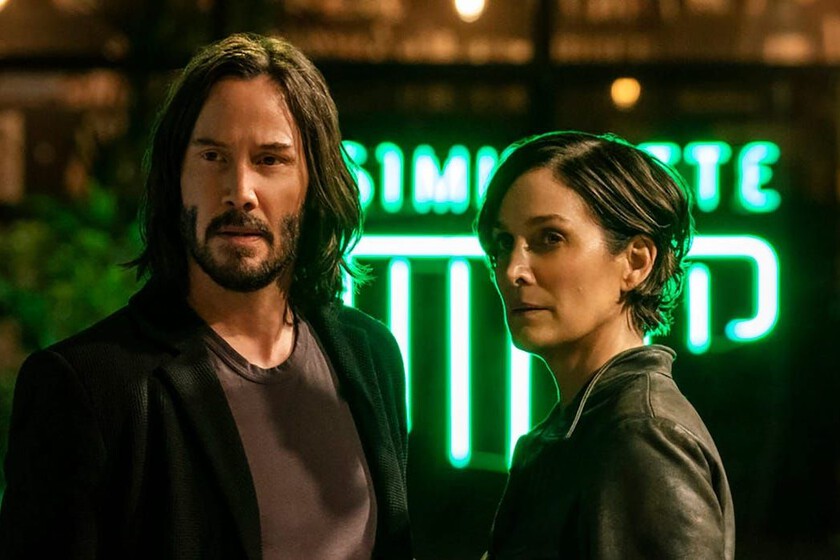 Lana Wachowski does not leave a puppet with a head in the fourth installment of ‘The Matrix’. Neo’s return, nearly two decades after Keanu Reeves’ transformation into total icon of action and science fiction cinema, is A metafictional machine gun that shoots the industry, the franchises, the current state of the genre and yes, to the original films themselves, which, Wachowski seems to say, we still have a little more mythologized.

Those moments are the brightest and most surprising in the movie, and also the most poisonous, but ‘Matrix Resurrections’ is much more than a mere exercise goal, or a nod to times gone by. It is also a studiously irregular film, almost like a challenge to those sequels drawn with square and bevel, of mathematical scripts and zero surprises in its development. With ‘Resurrections’ you don’t even have to get paranoid about spoilers because it tells, again, the oldest story in the world.

‘Matrix: Resurrections’ seems to recognize that the trilogy closed the original story conveniently well, but also that it is easy to start over. After all, who is going to trust a gentlemen’s agreement between two machines: we won’t say more, but yes basically we are facing a new reformulation of the argument of the first ‘Matrix’… in a world where the first ‘Matrix’ has already happened. Things to turn off and on the computer to reset the system.

It’s just the starting point for uA very sharp and edgy reflection on the franchises, sequels and the very nature of ‘Resurrections’. We will get to see a character, something like the “producer” of the new Matrix (of the film and of the fiction) explaining how bullet time works, of which he speaks with the same terminology. The characters will talk about the public and the differences between the one from twenty years ago and the one now, about the need for a sequel, for social networks, for the stories to be repeated over and over again to make them work. All with the usual lcryptic language full of misunderstandings from the ‘Matrix’ movies, so that we dig into the interlineing for months.

And Lana Wachowski has time, too, to contemplate the effect of ‘The Matrix’, and criticize it. For example, talks about how perhaps the idea of ​​the pills as a binary choice was not entirely correct. Because life is more complex than that, and he regrets, almost with those words but enunciating it in a very intelligent way, that the extreme right has appropriated the symbolism of the red pill and the blue pill.

That is, here everyone receives, but obviously some more than others. Although the best moment is in a final speech -with which I saw steam from the ears of more than one of the spectators who surrounded me- and that highlights the general state of genre cinema, with clear allusions to superheroic film material -that Neo helped build, another MEA culpa by Lana Wachowski- and with a few utopian ideas to change it once and for all.

And all this with references to the original trilogy, some extremely interesting such as the room that replicates the room where Neo and Morpheus meet for the first time, a reverence for the evocative and subversive power of fictions. That is to say, with a clever and corrosive use of the legacy of the movies, and that should make you blush. experiments that work on the same terms but lag far behind in their results What ‘Ghostbusters: Beyond‘ The ‘Spider-Man: No Way Home‘

But also, ‘Matrix: Resurrections’ is a great action show (not as frenetic and frenetic as the other installments, that’s true), which recovers the choreographies and the stunts brand of the house, and that although never manages to leave behind the memory of the most mythical sequences of the originalsYes, the guy can handle it despite the years that have passed. The long final climax, willingly ugly and aggressive, is also almost a declaration of intent, a violent and sinister cut of sleeves, compared to the boring neatness of the million-dollar Marvel and DC franchises.

‘Matrix: Resurrections’ is not perfect or revolutionary: is high-budget punk sci-fi, and as such frenzied and irregular, but also highly thought-provoking. It doesn’t always work perfectly, but when it does – the new villain’s motivations, Smith’s reinvention, reflections on the saga’s mythology – it’s almost a mouthwash in times of clone franchises and ultra-sanitized cinema. ‘Matrix: Resurrections’ lives up to its predecessors and is the best reminder of what we have been in the audiovisual Matrix for years.

‘Matrix: Resurrections’ is a sequel at the height of the original trilogy and a great reflection on the current stagnation of cinema