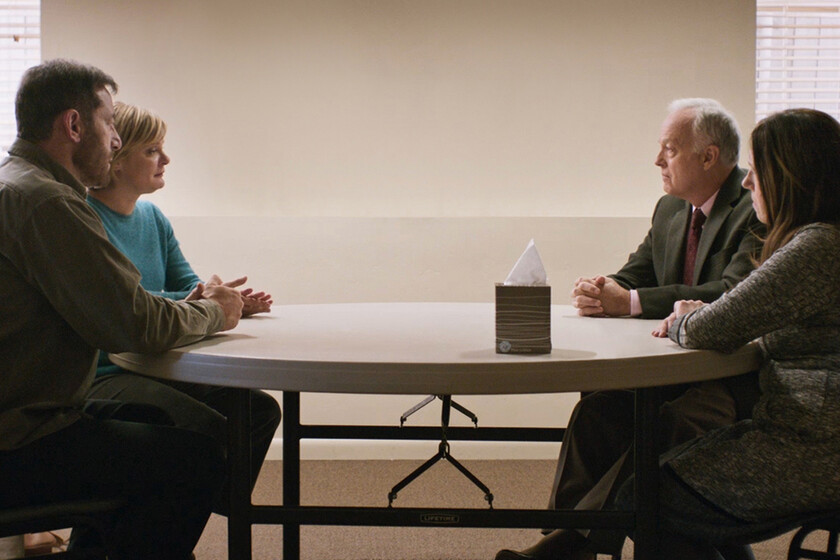 The other day, a video went viral on Twitter. It was a podcast in which two people talked about how, having special effects, there was no point in making movies without them. They commented, without any kind of irony, that ‘Sound of metal’ it would be much better if the protagonist lost his hearing but learned to fly insteadwhy make a movie like ‘CODA’if it is -supposedly- boring, instead of one starring people who shoot lightning from their eyes?

I suppose that ‘Mass’ is not a movie for these two people in particular. It is exactly the opposite of what they say they love: an intimate drama in which two couples bare their hearts and face their worst traumas. Is about One of the best movies of the yearone of these little wonders that will continue with you months later, without you being able to forget it completely.

When ‘Mass’ begins, it does so in an affable tone, an artificiality that dresses the pain of four characters looking for some kind of solace after one of the worst situations that nobody can live. The absurd phrases made to look good when no one is able to take the first step mark the beginning of almost two unforgettable hours that we will live almost entirely in a room without artifice of any kind, and in which we will discover what happens when the curtain of cordiality falls completely.

The most heartbreaking thing about ‘Mass’ is understand all four parts, their sadness, their desolation, their pain. And understand every reproach, every defense, every attempt to justify what happened. There are no good or bad, but everyone needs to find a guilty party to feel their own guilt evaporate. Obviously, that relief never comes by itselfand perhaps they are wrong in their own goals: what they seek is understanding, forgiveness, trying to turn the page of the heaviest book in the world.


Some of his interlocutors may be in a hurry, but ‘Mass’ is not. It takes time to get to the heart of the matter, at the moment when the screams and cries break outbut he does it in the most intelligent way possible: first he is concerned that we get to know the most social and open side of his protagonists, and then he attacks the reason why they are sitting, try to suture the open wounds with a blow of reproachlet them bleed until the end and, finally, try to make a hug heal the impossible.

The world wept at ten. We cry at eleven.

It is difficult to talk about ‘Mass’ without making spoilers or going into the reason that has brought these two families together, but it is a film that can be recommended blindly. Yes, there are four people sitting around a table in a small room in the parish church, but Fran Kranz knows how to give each scene an enviable rhythm without the need for great watermarks with the camera. He is a director who is not noticed: Puts the camera where it should so you don’t get distracted from what’s important.


Some say that, seen like this, could be a play or a podcastand yes, it could be, but at the same time you can see that it is directly intended for the big screen: the footage gives more than it takes away, accentuating the drama and setting the pace with a couple of small dreamlike moments that accentuate the feelings of their characters.

By the way, Perhaps the name of Fran Kranz sounds familiar to you: he is an actor with twenty years of experience whom we have been able to see in ‘The cabin in the woods’ or the recent ‘Julie’, on HBO Max. For his first project as a writer and director he has chosen a film that could have been a disaster in the wrong hands, but it shows that he believes very strongly in his own project, despite the fact that it has not been unfairly reinforced in the prize race. The Oscar for best original screenplay went to ‘Mass’. On the contrary, it was an armed robbery.

The cast of this movie is one of the most generous that have been seen lately in the cinema: they all have their moment of glory, but they also know how to back down without much fuss to leave the place under the spotlight to someone else. None of the four try to assert themselves more than the text or act in an overreacted way, pretending to take the congratulations of criticism.

With exceptional respect for the script, and knowing that they are facing one of the roles of his life, Jason Isaacs, Martha Plimpton, Ann Dowd and Reed Birney exceed any possible expectation, both in the kindest moments and in the most devastating. And it is that ‘Mass’ is a roller coaster of emotions that does not allow you to trust yourself at any time. The ascent is slow, but the descent is terrible and will take your breath away.


In ‘Mass’ there is not a big scene, a high point, a clip for the Academy: every minute of the footage is vital, brimming with truth, heart, anxiety and pain. Every dialogue is carefully crafted so that the motivations and broken hearts of these characters can be understood. from the beginning to the final catharsis in which it is inevitable to feel compassion, sorrow and empathy for literally everything that is shown on the screen.

‘Mass’ lasts two hours, and of those, at least an hour and a half passes between four characters around the table. And we assure you that you won’t be able to look away you will not be bored for a single minute. Among the crowd of empty premieres that arrive on the billboard, ‘Mass’ is determined to make feel the devastation, the sadness, the empathy, the resentment and the deep love of these people trying to find common ground after the worst situation of their lives. It’s still in your favorite cinema: take the opportunity to see it before it’s too late.

‘Mass’: the best film of the year talks about existential emptiness, pain and hope