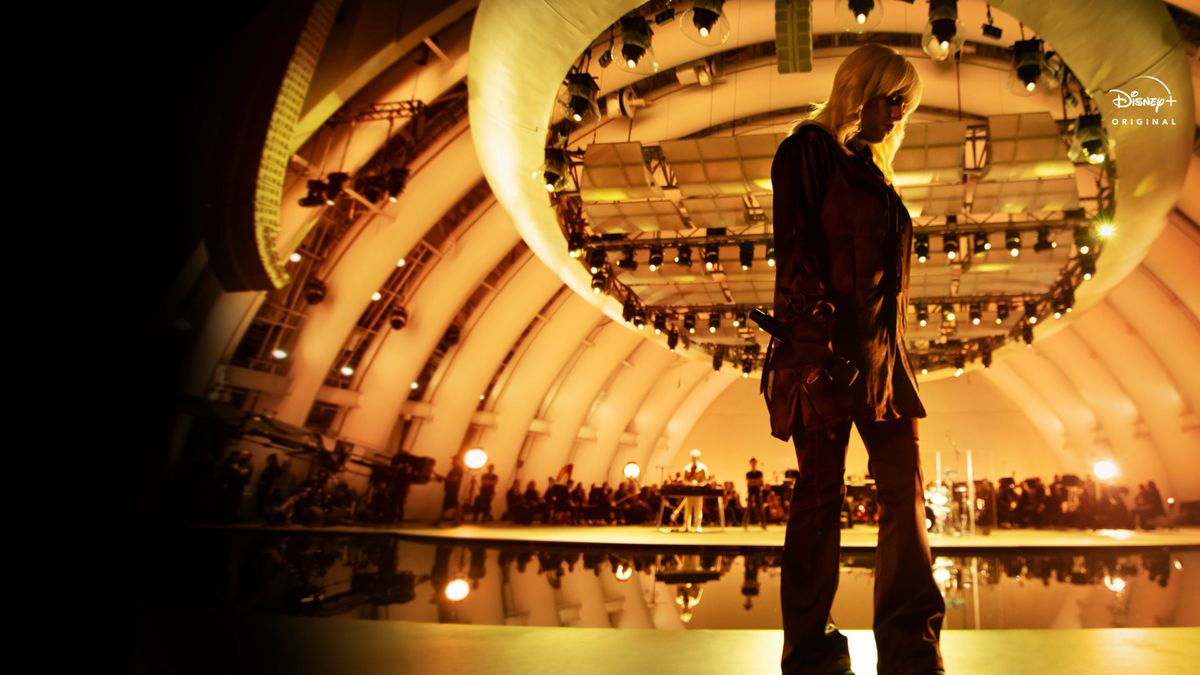 An immense circular stage where a singer, shy, almost ghostly, sings for huge empty stands. It is night and a blue light bathes the arena. There is something unreal in the environment. Even more so when that girl used to be a cartoon who left a recording studio to flee somewhere. That place just seems to be the immense stage, in this case the iconic Hollywood Bowl in Los Angeles. The cartoon is Billie Eilish, whose tribulations for the Californian city of dreams are associated with the songs of the same flesh and blood Eilish who is on stage. A symbiosis that marks Happier Than Ever: A Love Letter to Los Angeles, the one-hour movie recently released by Disney +.

Happier Than Ever: A Love Letter to Los Angeles it is not a documentary. Nor is it a concert to use. It is an audiovisual experiment, directed by Patrick Osborne and Robert Rodriguez —Open till dawn (1996), Sin City (2005) -. As in that last film, Rodriguez uses a suggestive animation to show Billie Eilish as a simple young woman from Los Angeles, who likes to drive, walk at night and be away from the spotlights of fame while contemplating the city she loves. However, animation is a makeup artist resource rather than a definitive one. She is the real Eilish, the one made of flesh and blood, the one who with her music, with that whispering voice and the lyrics of her sorrowful songs, acts as the real engine of the film and, at the same time, is the only one who speaks and affirms: “I thank Los Angeles for my childhood and my growth in it. Every year I like it more ”.

In a way, this audiovisual love letter to Los Angeles is another way to promote his latest album, Happier Than Ever, published last July. It is something more and more recurrent among pop and rock stars. Music consumption has changed so much that today digital video platforms are also being taken into account to reach more listeners. Within the prevailing current audiovisual culture, where YouTube is the most demanded channel for music consumption above Spotify or Apple Music, music also needs to be seen. There are no singles that are not presented without their video clips, each day more worked, but now films are also created to accompany discs. Before Billie Eilish, Taylor Swift or Bruce Springsteen, among others, have explored this path. In fact, Eilish herself had starred The World’s a Little Blurry, a documentary that explored the intimacy of the biggest pop phenomenon in recent times.

With this film, the most international icon of the well-known generation Z appears more adult, losing freshness and that dark and groundbreaking vibe with which he revolutionized pop in 2019 thanks to his first album, When We All Fall Asleep, Where Do We Go?. She is seen with her platinum blonde hair and a tender look, very different from the girl with green locks and restless eyes of the past. It is something that he also showed in his outstanding last album, in which he talks about the dark side of fame and social pressure, a work of deep emotional depth where the loneliness of a queen in a golden cage who does not want to be queen beats and it would shatter the cage.

There are no singles that are not presented without their video clips, each day more worked, but now films are also created to accompany discs

In the Disney + film, Eilish sings all the compositions in the same record order while a visual staging dazzles. There is a lot of elegance in the performances in which his inseparable brother Finneas accompanies him. It’s not the only one. In the third intervention, Eilish touches Billie Bossa Nova and has with her Gustavo Dudamel leading the Los Angeles Philharmonic and Brazilian guitarist Romero Lumbabo. The Venezuelan director and his impressive entourage appear in more songs to beautify the environment and give a more sensual and extraordinary dimension to Eilish’s ballads of romantic loneliness, an antidiva from the beginning that is presented in loose clothing and makes a plea in this film Against the tyranny of the image: “If I put on something more comfortable, I am not a woman. If I take off my clothes, I’m a slut … Does my value depend on your appreciation of me? It is not my responsibility “.

With a city of Los Angeles presented as a rumor, a dreamlike setting, Eilish’s cartoon seems less fragile than the real person, the same one who delicately sings and cries out for her life in a concert without an audience, in a perfect setting for someone trying to understand their reality.