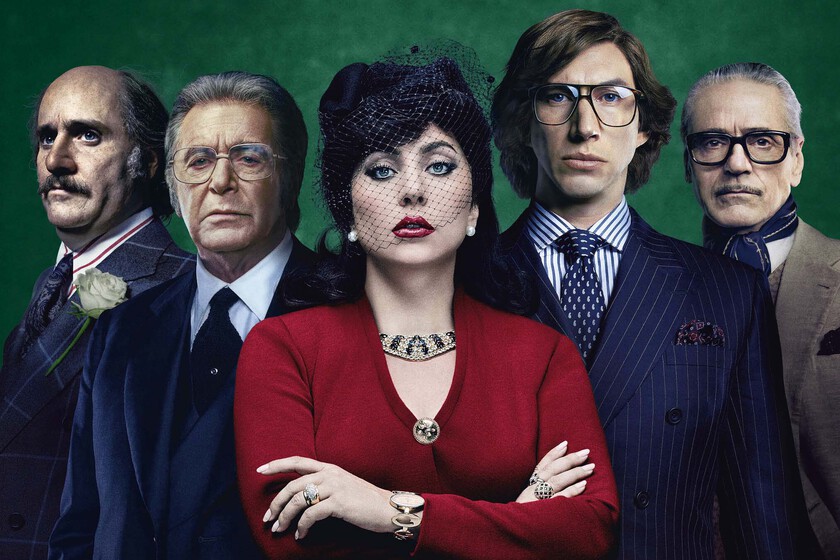 In a moment of ‘The Gucci House‘(House of Gucci) Adam Driver’s character attends a fashion runway, and between the flashes and the darkness he seems to glimpse a Lady Gaga bathed in flashes of light that allow him to see a sinister smile, in what seems almost a diabolical appearance very much in keeping with the versatility of the singer and actress. It’s one of the best moments of the new Ridley Scott movie, which is aesthetically reminiscent of its brand new ‘Black Rain’ (1989).

Yet it is an isolated moment, a small, almost dreamlike fugue that does not represent the general tone of the filmCuriously, at a time when the designer Tom Ford is mentioned, since he was one of the architects of the resurrection of the Gucci house in the 90’s. The coincidence is funny, because Ford is now a very remarkable director, no longer one comes up with a more appropriate name to carry this story of frigid passions, decline of the bourgeoisie and betrayals with echoes of Greek tragedy than the director of ‘Nocturnal animals’ (2016).

And it’s not that Ridley Scott doesn’t have a certain recent filmography that made him a prime candidate. ‘All the money in the world’ (All the Money in the World, 2017) es a story of dysfunctional wealthy families, legacy, poisoned inheritances and violence, but the fascination for the classical world fitted in in a very natural way, getting moments of great cinema. However, in ‘La casa Gucci’ there is a component of collision of cultures and class quite different.

The story of Maurizio, the spoiled and lonely son of Rodolfo Gucci who falls in love with a middle-class woman to the horror of his father (Jeremy Irons) has something of a Cinderella tale in reverse. A good opportunity to play the creative possibilities of the material regarding the resemblance to popular storiesHowever, the camera is limited to portraying the idyll from its first steps, from seduction, to the final moment decades later.

Lady gaga is the star


Our point of introduction to the family is Patrizia, a witty Lady Gaga who lives the role of vulgar girl with aspirations like I’m in the movie that she imagined to be ‘House of Gucci’ To convince us that it is what it should have been. There is a ‘Dynasty’ telenovela touch to the character play and instead of embracing the side of the serial, Scott tries to tie it to its usual rigidity to give it an aura of consistency and elegance.

The director is comfortable before the game of inheritance and heritage intrigues The one Patrizia plays with to increase Maurizio’s stake in the luxury fashion brand, exploiting the tension between cousin Paolo (Jared Leto) and the latter’s cunning father, Aldo (Al Pacino). However, when Gaga is removed from the center of action, the film loses its entirety and her absence is only compensated by the background of the fashion world.


The juiciest moments of the desperate Patrizia, which begins to alternate with the seer Giuseppina Auriemma (Salma Hayek), are relegated to mere counterpoint, wasting the esoteric side of that plan, also losing focus in the wave of despair that leads him to make the decisions that lead to the existence of ‘La Casa Gucci’. Lack of frivolity and a delineation on canvas and not on lines of grid notebooks. Absurdity, madness and darkness are lacking.

In crops of nobody

Because, although at times it wants to sound like it, ‘La Casa Gucci’ is not a black comedy. During some passages there is a festival of imposted Italian accents While the actors speak English, it seems that we are attending a performance, not a true story. And it is not that we are not used to Anglo-Saxon productions working like this, but the middle ground does not quite come together, and Jared Leto takes the option of turning his character into a grotesque cartoon of SNL which ends up being the funniest part of the film, despite screeching so much in the set.

Driver plays his chump role well and Jeremy Irons fits like a glove with an accent or not, but the set’s correction calls for a festival camp that never ends up coming. And the downside is that with the duration of two and a half hours the murkiest part ends up suffering, a final stretch that does not achieve the tragic and sinister weight that it cries out for, accumulating events more like a documentary –one quite interesting– than like the story of those flesh and blood characters that we have followed in many stages of their lives.


It’s still amazing that an 83-year-old director has put out two solid movies like ‘The last duel‘and it’s in the same year. Because we are not fooled, ‘La Casa Gucci’ is an attractive and didactic work that is resolved with callus and narrative concretion. It is neither more nor less than the work of a born worker who continues to offer solvency and effectiveness in the projects he faces and is far from the disaster that many expect, but he did open a door for the festival with more risk, even for the bad taste and the scattering, which remains closed for most of the footage.

‘La Casa Gucci’: Ridley Scott cleverly solves a family epic that cries out to be disheveled with more bombast camp