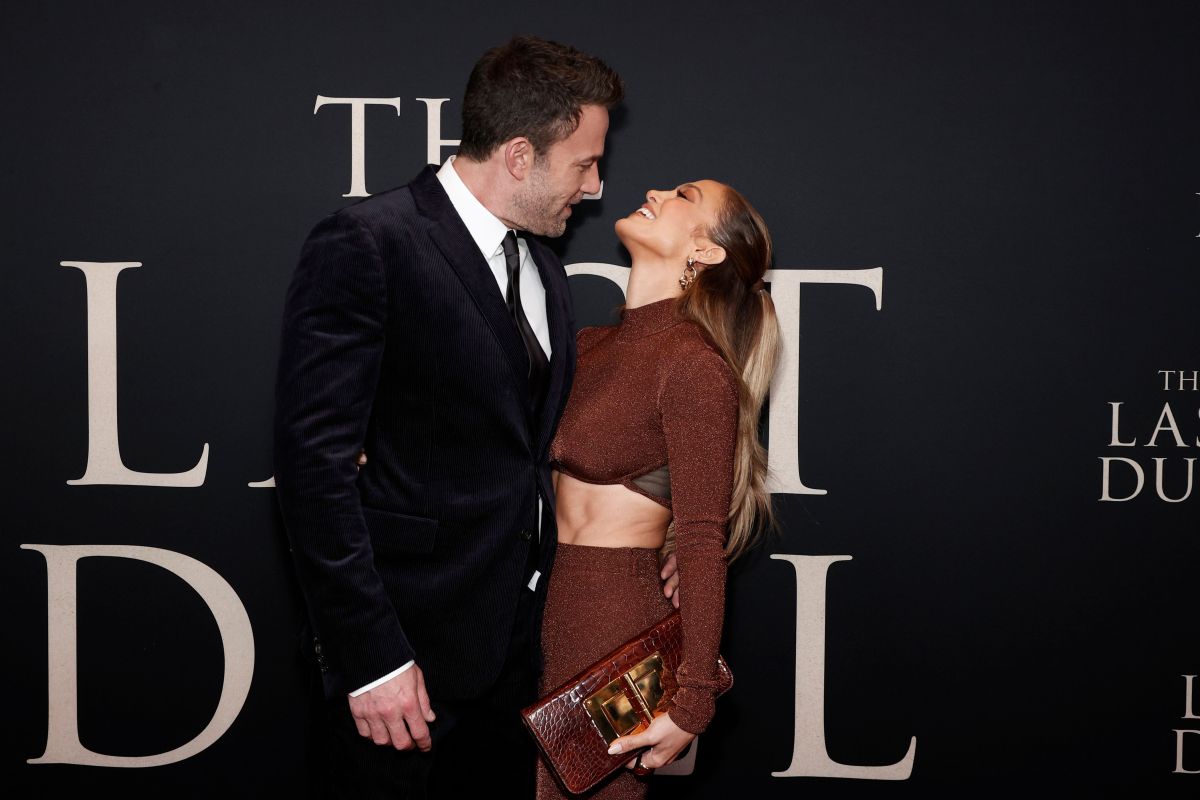 Jenniferer Lopez Y Ben Affleck They got engaged for the second time. However, their relationship has been one with a long history, since they were together for the first time 21 years ago, and that is why we want to tell you how they met, how their relationship ended in 2004 and when they fell in love again.

On the set of the movie “Gigli”, Jennifer Lopez and Ben Affleck met best playing a gangster couple who fell in love at the end of the film. At that time, the singer was married to Cris Judd, her second husband. So in an interview with Vanity Fair in 2003, Affleck assured that at that time they They were very good friends and they met without the falsehood of courtship.

“Jennifer Lopez and Chris Judd have announced that they have resolved all the problems that appeared in their marriage. The settlement was extremely amicable,” the couple’s attorney said in a statement. Affleck assured Vanity Fair that “Something changed when he told me that he was going to separate. At that point, it became a possibility. The doors had been opened.”

November 2002: Lopez releases the video for “Jenny From the Block” with Ben Affleck, the couple begins shooting “Jersey Girl” and confirm their first engagement.

At the beginning of that month, The singer released the video for “Jenny from the Block” in which a fictional version of how the couple was constantly chased by paparazzi was shown.

Shortly after, the couple began shooting his second movie “Jersey Girl” and director Kevin Smith assured that he created the term “Bennifer”a nickname for the couple created by joining the names of both actors.

In an interview with Diane Sawyer, the couple confirmed their engagement that began with a traditional proposal that took place in Boston. López assured in that interview that “For the first time in my life, I cried too many happy tears,” describing the actor as “brilliantly intelligent, loving, charming, caring.”.

February and March 2003: López and Affleck go to the premiere of “Daredevil” and the actor assures in an interview that the singer makes him a better person.

The couple appear together at the premiere of “Daredevil”, film starring Affleck. In it he appeared with Colin Farrell, Michael Clarke Duncan and Jennifer Garner, with whom the actor would marry in a few years. At the time Garner was married to Scott Foley, but they divorced in May 2003.

In an interview with Vanity Fair, Affleck confessed that “she makes me a better and happier person […]. She’s the only person she’s ever met and I’m thrilled at the thought of [casarme]”. In addition, he added that he did not understand why the public was obsessed with their relationship.

July and August 2003: The couple promotes “Gigli” and the media asks about their romance. “Gigli” premieres and is hated by critics.

During the media tour of the film “Gigli”, The couple recalled that they did not know each other much before the filming of the film and at that moment they became “very good friends”.

“We talked a lot and that was the point,” said the singer. “It felt like we had good chemistry,” the singer added, but recalled that she couldn’t specify exactly when they fell in love: “We became friends first, that’s the honest truth,” he said.

Lhe movie “Gigli” was released in theaters and was rated very poorly by critics. “Probably my lowest point was when it came out [este filme]. It was very difficult,” the actress said in an interview with HuffPost Live, according to E! News.

People magazine stated that the couple was to marry in a ceremony in Santa Barbara, California. However, “due to the excessive media attention on the wedding, we decided to postpone the date,” the couple said in a statement. “We began to feel that the spirit of what was supposed to be the happiest day of our lives could be compromised”Lopez and Affleck added, referring to everything he had planned to keep the paparazzi away from the ceremony.

After Affleck went alone to various events and Jennifer Lopez was seen without her engagement ring. The statement in which the singer’s representative told People that the couple had broken off their engagement was not a surprise to the public.

Although it was not as hated as “Gigli”, the film also had very bad reviews.

The ceremony took place in Beverly Hills and did not have many guests. The singer had twins with Marc Anthony in February 2008. The couple officially separated in 2011.

June 2005: Ben Affleck and Jennifer Garner marry in the Turks and Caicos Islands.

The couple married in a small ceremony and had three children: Violet, in December 2005; Seraphina, in January 2009; and Samuel, in February 2012. In June 2015, the couple confirmed their separation after a decade together.

May 2010: Lopez admits on “The Graham Norton Show” that relationship with Affleck suffered from media attention.

“I loved Ben, he was a great guy; but it was too much for both of us to be harasseds [por los medios] for two years in a row Lopez stated. “I think our relationship suffered because of that. was not the only reason […]but it played an important part of the dynamic of our relationship, “he added.

January 2013: Jennifer Lopez says she and Ben Affleck are in constant email communication.

On the show “Katie”, he assured that it was not strange to meet his exes at parties or awards. He assured that he kept in contact with Affleck through “email”. He added that she was very happy with the success of “Argo”, the movie directed by the actor.

November 2014: Jennifer talks about her romances in her book “True Love”.

In her memory, according to Page Six, the singer wrote that she claimed it was her first real heartbreak. “Ben and I parted ways at a time when I thought we would be together forever. […]. She felt like my heart was being ripped out of my chest.”

He confirmed that Marc Anthony returned to his life, three days after he was supposed to be at the altar saying “I do” to another man. “Seek comfort in someone else,” he confessed.

March 2016: Jennifer Lopez says she and Affleck had “genuine love” for each other.

In an interview with Jess Cagle, López said that “We had to be together when the tabloids were born and it was too much pressure.” He added that “there was genuine love between the two.”

In her documentary “The Ride”, the “On the Floor” singer expressed that “I think that [la atención de los tabloides] contributed to the end of their relationship and the love we had. There was a lot of prejudice, pressure, scrutiny and opinion, and it was very difficult to deal with.”

February 2020: Affleck thinks that López had to be nominated for the Oscar Awards for “Hustlers”.

“She should have been nominated. It was the best”, assured the actor in an interview with the New York Times, according to reporter Brooks Barnes commented on a Twitter thread about the parts that did not go into the interview. “He spoke periodically with her and I respect her a lot,” was another of the phrases that did not enter the report.

January 2021: Ben Affleck assured that people say a lot of sexist and racist things when they are together and the actor ends his relationship with Ana de Armas.

In a podcast for The Hollywood Reporter, Affleck said that people were very mean to Lopez when they were dating. “They were sexist and racist. They were writing ugly, vicious sh*t about her in ways that if you wrote it now, you’d be fired.” She assured that today, she is more respected for her achievements.

For this time, The actor ended his relationship with Ana de Armas, whom he met on the set of “Deep Water” in 2019. They have been officially dating since April 2020.

April 2021: Jennifer López ends her relationship with Alex Rodríguez after four years together and the couple is seen together again for the first time.

The separation of the baseball player and the singer was confirmed by TMZ and E! News. A source assured People that this breakup had “I’ve seen it coming for a long time.” In a statement on the “Today” show, the couple explained that “We realized that we will be better off being friends […] We wish the best for each other.”

Around this time, Page Six reported that Affleck was seen “being picked up by a van belonging to Lopez.” However, anonymous sources spoke to People and E! News to say that the actors were just friends.

May-June: The couple is caught by the paparazzi being together.

During this time, Lopez and Affleck were photographed together several times in Montana, Miami and California.

Several sources assured different media such as People and E! News that the couple had a very strong connection and that Jennifer was happy.” By June 2021, Page Six posted photos and video showing the stars kissing and being close together.

In an Instagram post celebrating his 52nd birthday, The singer uploaded a series of photos on social networks and in one of them she appears kissing Affleck, confirming the couple’s return.

September 2021: The couple makes their first public appearance at the Venice Film Festival.

Lopez accompanied Affleck to the premiere of “The Last Duel” at the Venice Film Festival. This was their first appearance together for 18 years.

April 2022: Jennifer Lopez is seen with a new ring and her second commitment to Ben Affleck is confirmed.

In a post on social networks, the singer assured that she had a “very special” message to share in her personal newsletter. In it, she uploaded a 13-second clip of her looking at a green diamond ring while crying. A source confirmed to People that the couple had officially gotten engaged again.