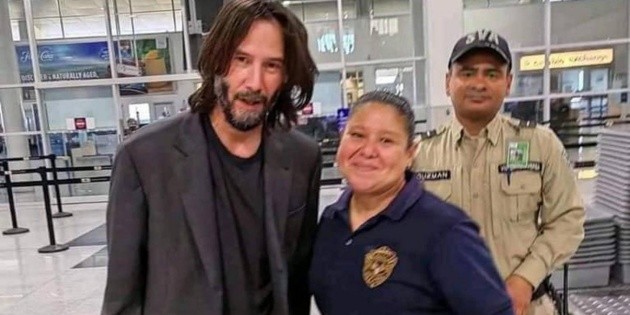 The renowned 57-year-old actor Keanu Reeves visited Costa Rica for almost two weeks, since he entered the country last Friday, April 1, and left the country yesterday, Wednesday, April 13, as confirmed by the General Directorate of Immigration and Immigration.

According to images circulating on social networks, several people recognized him at the Daniel Oduber Quirós airport, in Liberia, Guanacaste, and took pictures with the movie star.

Reeves is especially known for his role as Neo, in the Matrix saga. However, he is also well remembered for his performance in the John Wick saga and in the film Constantine, among other successful productions. In early 2005, he was even awarded a star on the Hollywood Walk of Fame.

The Canadian actor of Lebanese origin has been characterized by his humility and good treatment with his followers, proof of this were the photographs that circulated yesterday Wednesday on social networks. Even officials from the Costa Rican air terminal got pictures with the actor.

Recently, Reeves He was involved in a controversy with the People’s Republic of China, since his position in favor of the independence of Tibet caused the Asian giant to eliminate all the films starring the Canadian from its platforms.

This was due to the fact that the actor and musician attended the Tibet House virtual charity concert on March 3. The event in support of Tibetan independence was also attended by Laurie Anderson, Patti Smith, Philip Glass, Cyndi Lauper and Iggy Pop, among others.