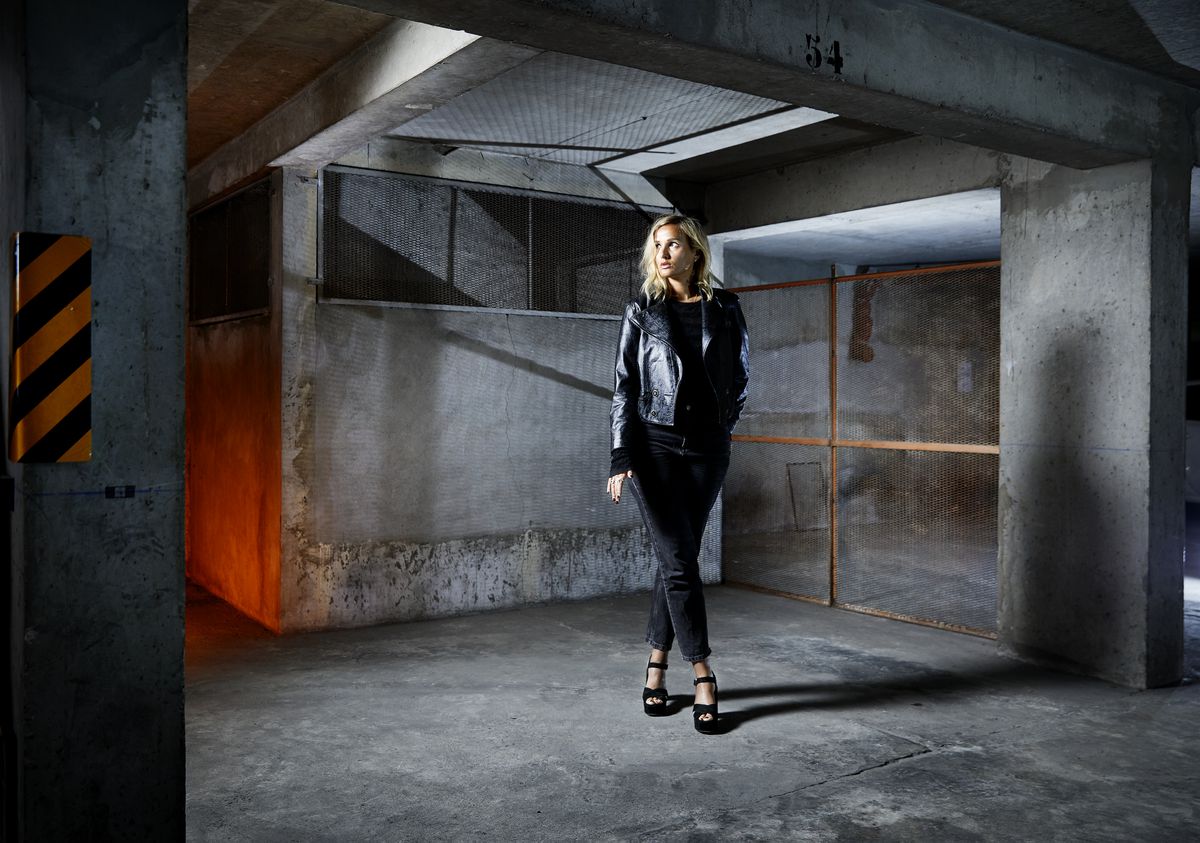 Do dogs look like their owners. Movies too. Like her new film, Julia Ducournau bursts in like a hurricane, ready to destroy everything, without fear of what she ends up taking away. Just face Titanium, which will hit theaters on October 8 – before going through the Perlak section of the San Sebastian Festival – after winning the Palme d’Or in Cannes, to glimpse the frontal personality of the French director, who in short distances reveals jovial but implacable, as exuberant as it is hermetic, wrapped in a black attire between solemn and rogue. Leader of the ranks of a new genre cinema that has already revolutionized the film scene in her country (and part abroad), Ducournau makes a film with colossal ambition, proud of its imperfections, full of disconcerting twists and ultraviolent scenes, of Those that force you to look away and cause some marginal fainting, conveniently exaggerated by the press.

It stars a metal-cold serial killer, with a titanium plate embedded in her skull from a car accident she suffered as a child, and a steroid-doped firefighter who thinks he recognizes in his battered face the son he had been trying to kill for years. find without success. He wants to be a father at all costs, even if it happens through self-deception, while she is terrified to discover that a strange being is growing inside her womb. Titanium Dynamite all the codes of the genre, in all the senses of that word. “In my film, femininity is not where you expect it, and neither is masculinity,” Ducournau said at the end of August, sipping a glass of white wine and stringing cigarettes on a Parisian terrace, just returned from her vacation in a Greek island. From that motley and excessive tale, which even includes a torrid sex scene with a Cadillac (!), An unlikely love story will emerge. “My characters embody two lies from which a truth springs,” he sums up.

The 37-year-old director’s life turned upside down one night in July when Spike LeeChairman of the jury at Cannes, he mistakenly announced right after the awards ceremony that his film had won the festival’s highest award. “I have not digested it yet, it is too recent. During the summer I have tried not to think about it to preserve my sanity ”, he smiles. 28 years after the New Zealander Jane Campion, which won the award for The piano In 1993, Ducournau thus became the second woman to win the Palme d’Or. And the first to do so alone, since Campion won it equally with Chen Kaige by Farewell to my concubine. “I had the feeling of being part of a movement towards the future, of being on a moving train,” she recalls. “I thought of the third woman, the fourth and the fifth who will receive the award. I don’t know if Campion had the same feeling in his day, because then it might seem that he was just an exception. I, on the other hand, felt like one more link in the chain. That was what moved me the most ”.

Ducournau sports a tattoo on his right clavicle: the word amethyst written in the Greek alphabet. She chose it because she collects that violet variety of quartz since she was little. Also because he is passionate about its etymological meaning, translatable as “against drunkenness.” “The Greek kings used this mineral as an amulet, to prevent the other kings from getting them drunk when negotiating power over a territory,” he explains. That inscription on her skin serves as an antidote to the drunkenness of the applause, as if she hoped that nothing would divert her from her course. “Actually, I don’t think there is only one path in life. In that I am very existentialist. It is the experience that leads us to find our essence as individuals. You can die without finding it, but it is that tension that gives meaning to your life ”, says Ducournau, as a good subject of Sartre.

Following the success of his debut, Crude, a tale of teenage cannibalism discovered at Cannes five years ago, it was taken for granted that she would emigrate to Hollywood, as so many young genre film talents did before her. The offers were not lacking, but he preferred to resist those siren songs and continue living with his partner in his apartment in the Marais, that exclusive Parisian neighborhood that was Jewish and gay before being filled with restaurants, fashion stores and art galleries. “I saw myself only at the beginning of my career and I wanted to continue finding my language. I felt that I could not do it in another place than in France ”, it is justified. “In my country, genre cinema is still a new art. A renovation has been taking place for a few years. I preferred to participate in the construction of something new and see if a new wave was possible rather than go to a place where there is already a strong industry and a long tradition ”. His only foray into the United States was directing the first two chapters of the series. Servant, produced by M. Night Shyamalan, his friend and supporter since he fell in love with Crude. After the definitive impulse of the Palme d’Or, now he is preparing his assault on Hollywood. “My base will continue to be in France, but I will go back and forth. My next feature film will be French, but I have a series project in the United States. I will also make a movie there at some point, because I feel like it. But first I must find good travel companions… ”, he points out. It will be useless to interrogate her about those projects. “I’m not going to say anything,” he replies with an insurmountable smile.

His cinema moves away from the postulates of the new wave, which in some interviews he has branded as dogmatic – something similar to a sacrilege in the homeland of Truffaut and Godard -, but continues to be supported by the blind faith in creative control, added to the absence of any inferiority complex with respect to the all-powerful studies . Even so, it also reflects a permanent fascination for the American imaginary, not always common within a generation, that of the French who grew up in the eighties, raised in an anti-Americanism soft, which led some national intellectuals to label the creation of Eurodisney as “Cultural Chernobyl”. “Actually, Robocop, Terminator O Alien they were our lullabies, although there was a somewhat recalcitrant contempt for that popular culture that is everywhere today ”, he clarifies. “I am not inspired by other traditions to break with the cinema codes of my country. What I like is mixing different things. David Cronenberg’s films and South Korean cinema inspire me as much as Italian neorealism. I want my projects not to be attributed to a single nationality or gender. I aspire to make a cinema that is mestizo ”.

She recognizes herself in that last word: she is the daughter of a Breton and an Algerian Berber, a double ancestry that perhaps explains the intimate sense of difference that her heroines seem to experience. His parents, both doctors, have also influenced his cinema, so full of bleeding and prosthetics, nourished by the conversations about patients he listened to at dinner time and by the medical manuals that abounded in the family library. “My father is a dermatologist and my films talk about bodies and skin. My mother is a gynecologist and my cinema focuses on femininity ”, confirms Ducournau. The office of her parents also made her aware, from a very young age, of her mortal condition. “At the age of four, I already knew what death was. I became familiar with the idea of ​​finitude at an age when I shouldn’t have been aware of it, ”he seems to regret.

Ducournau grew up in a favored neighborhood in the center of Paris, in a home where classics by Hitchcock and Douglas Sirk were seen on VHS at night, and studied at the Louis-le-Grand Lyceum, an elite center that was alma mater by Molière, Voltaire, Victor Hugo and Baudelaire, with whom this poetry lover shares a taste for black-tinged romanticism. He began literary studies at La Sorbonne, before finishing at La Fémis, the great French film school. She stood out with a couple of short films that put her on the producers’ radar. And then with two lengths that give off a somewhat dire image of the family, where the sisters are accomplices but also rivals, and the parents breed psychopaths with their deliberate lack of affection and empathy. “I get on well with my family, who have always supported me, even when it was not easy,” Ducournau corrects. “But family is always something you build against. There always has to be a break, because in that opposition your becoming is forged. The family is a world full of things that are not said, and I am happy to dismantle those taboos. In my cinema I like to teach what cannot be taught and talk about what is forbidden to speak ”.

Julia Ducournau loves the word monster, in which she sees nothing pejorative. “The monstrosity is one of the most universal experiences that exist. The monster is the subject we point our finger at. I too have felt like a monster many times, in many ways. In your personal life, it is impossible to always feel in line with the social norm, to be where you are supposed to be at your age. And when you make the films that I make, they usually tell you that you are, especially if you are a woman ”, she replies.

Titanium It can remember that cinema from the eighties that spoke of men who became machines and machines that became men. The end of his film points, without going into details, in that direction. “I believe in hybridity, because it always seems positive to me. In every mutation there is a force. Transhumanism does not scare me, ”says Ducournau, who has not yet read Donna Haraway, theorist of the cyborg condition, but will be quick to do so now that she is cited as a supposed inspiration in three out of four interviews. His films describe painful processes of change, from which his protagonists come out bruised, but also stronger. A biographical reflection is not hard to guess. “Yes, it’s true,” Ducournau admits with a somewhat rude modesty, preferring, for the first time in hours, silence to loquacity. After all, titanium is, according to the periodic table, a transition metal.