The world of entertainment regrets this Monday, September 12, the departure of an actor with a huge career in television, cinema, theater and also advertising. George Varas He died at the age of 68, according to what was communicated on his social networks by the Argentine Association of Actors, entity of which he was part of the Guild Secretariat between 2004 and 2006.

These days it is presented at the prestigious Venice Film Festival one of Varas’ latest works: nothing less than The movie Argentina, 1985made by Ricardo Darin Y Peter Lanzaniwhich will be released in national theaters on September 29. But in addition, the actor is remembered for his roles in The Simulators, Floricenta, Married with kids Y sound of ironamong other television fictions. 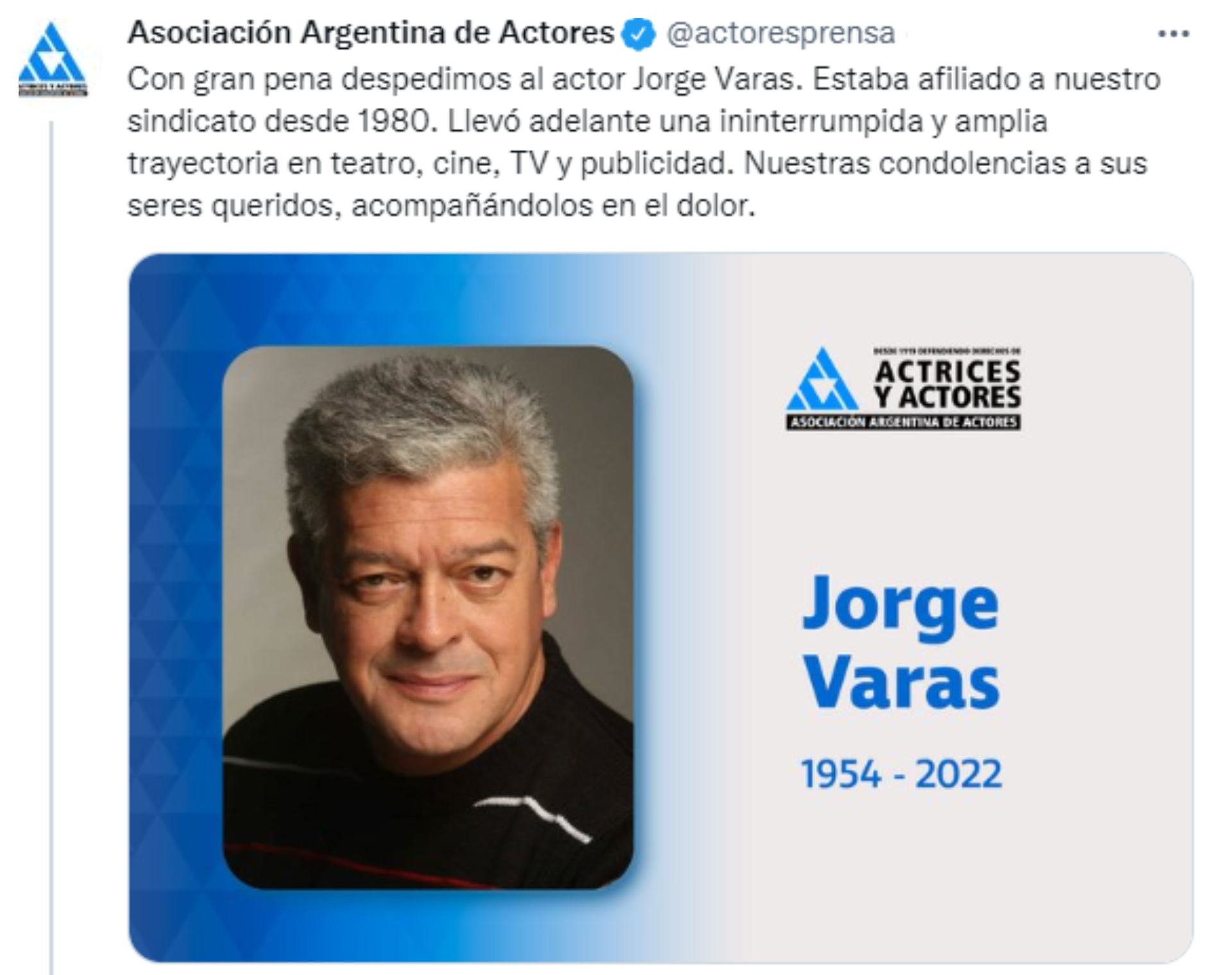 With no artistic background in his family, Varas began acting at age 17 as soon as he finished high school, where he excelled in mathematics. Despite the desire of his parents, who wanted him to study Economic SciencesJorge – who, due to the needs of his family, started working at the age of 13 – was enthusiastic about continuing Psychology either Theater. “You’re going to starve,” the father warned his only son, who ignored him: following his passion, he began taking classes with Alejandra Aguero, great teacher of actors. And she was not bad at all.

In phone -when it was the old Channel 11- he had his first experience: he went to the reception of the station to leave his resume, which barely included a handful of underground plays. Without sponsors, without contacts, knocking on doors was the only possible way. A week after that attempt, he got a role in a unit: the notables.

That modality -incessantly looking for an opportunity- would not leave her throughout a career that spanned more than four decades, and which also led him to shoot in Mexico (with Veronica Castro, among his most valued experience) and in Russia. And even share a movie with Robert Duvallconvened by the actor himself The Godfather: Assassination Tangoin 2002. At the same time, he made a large number of television commercials, especially in the 80s and 90s.

Jorge Varas in the 80s and 90s, when he starred in many advertisements (Photo: Facebook)

“I was born at the wrong time,” Jorge lamented. When he was young, those who starred were big actors. And I thought that when I grew up the opportunity would come. But if you look at soap operas now, it’s young people who are the protagonists, no more than 40 years old, and there are hardly any grandparents… Yes, before. It’s just that television changed.”

For many years, Varas was called for roles of “very tough guys”, as he defined, from drug traffickers to corrupt commissioners. “They always called me to play bad, I rarely did good. It is that nature gave me a very bad face, “he recalled, with a smile, in one of his last interviews, which he gave to the journalist Mariano Gioli. In that note, made in the midst of a pandemic, Varas lamented the lack of work, and was moved by a specific question: “Who would you sit down with for coffee?” Then he hesitated. His eyes got filled with tears. He apologized for the interruption. And he said, moved: “With my partner, who died…”.

That modality regarding the characters that used to offer him was modified in 2007 when he was summoned to sound of irona comedy strip for the whole family with Osvaldo Laport Y Mariano Martinez. In addition, on the small screen she participated in The lioness, You’re my life, gentlemen daddies, The successful Pells, all against john, Desperate housewives, Angry doll, Almost angels Y light corner, among many others. In The Simulators He was in a chapter: he was the representative of a singer.

“I was born with a bad face,” said Jorge Varas to justify why he used to personify villains

In addition to Argentina, 1985soon to be released, Varas -who taught theater classes with his colleague Ernest Claudius– You can also see his performance in the series world robberywhich will be seen on the sign Star+. Those were, in short, his last works. In cinema she also filmed The range, passionate Y Waiting for the float 2, Among other films. And in theater, where she also left her mark, she participated in earthworms, high in the sky, the last passage Y When Belgrano lost his innocence, to mention a few. Throughout this vast trajectory he personified different heroes, such as General San Martin.

Gustavo Corvalán, Braulio Assanelli and Francisco Benítez: what happened to the lives of the winners of La Voz Argentina
María Becerra called and insulted an influencer who tried to conquer her boyfriend J Rei
Dua Lipa falls in love in Brazil, Jennifer Lopez and Violet Affleck stroll through Beverly Hills: celebrities in a click

Jorge Varas, actor from Los Simuladores and from the movie Argentina, died in 1985