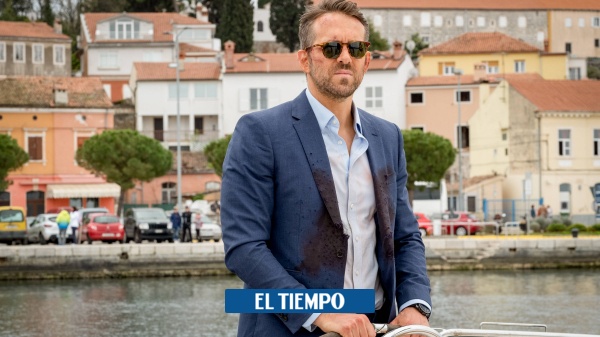 Without a doubt, the Canadian Ryan Reynolds He is the man of the moment in the cinema: he is the protagonist of the new Disney film, Free Guy, which explores the ‘gamer’ universe; in November he will share with Dwayne Johnson and Gal Gadot in Netflix’s spy thriller Red Notice, and next week it will hit theaters in the country with the acid comedy Hitman’s Wife’s Bodyguard – which will premiere as ‘Tough Caring 2’ and is the continuation of The Hitman’s Bodyguard.

On Hard to care 2, Reynolds repeats as Michael Bryce, but, unlike the first installment, he is dedicated to breathing in peace: the most reputed, violent and fierce bodyguard has become, he is on his sabbatical and does not want to know about weapons, fights or chases . But the calm will last until Sonia Kincaid (Salma Hayek), the wife of Darius Kincaid (Samuel L. Jackson) – his dangerous protégé from the first film – appears to set him on a new mission.

“The only thing I have with me is pepper spray because I am resting from violence and weapons,” Reynolds says of his role. And this new story takes place in the middle of high-voltage action: Samuel L. Jackson’s character is a murderer and naturally he is using weapons all the time, he has no problem doing it, it is something that is part of his personality; while my character now disagrees with that. “

Known worldwide for his role as the acid wrong superhero Deadpool, Reynolds has had a long career in romantic comedy –The Proposal–, drama –in Buried and The Captive, the latter by Atom Egoyan– and even in horror –with The Amityville Horror–. Not his entire career has been successful, but the triumphs have been enough to establish himself alongside his performance as an entrepreneur: he is an investor in a Welsh football team and a Californian telecommunications company, and the owner of an alcoholic beverages factory.

In this interview provided by the study, Reynolds –Popular in the Hollywood industry for its punctuality and demanding interpretations– tells details of Hitman’s Wife’s Bodyguard, which opens in Colombia on August 26.

What did you enjoy the most about this second part?
​
I think the idea that necessity is the mother of inventions fits here. It’s good to put aside that guns are the only tools that can be used when doing great action scenes, and start thinking and wondering: ‘if I’m in a big confrontation and I can’t use weapons, what else can I do? do?’. I think that thinking like this makes me more creative; in fact, it makes everyone more creative, and I love that.

It is good to put aside that weapons are the only tools that can be used when doing great action scenes.

What was it like working with the cast of the film?

I loved the cast. I was almost obsessed with my teammates (laughs). Working with Samuel L. Jackson has always made me imagine ourselves as two seaweed under water, it is as if we move together at the same time, carried by the current. And when Salma was added to the mix it was even more grand. She made us both better in everything we did and kept us awake every day.
Many actors when they leave the set always say that they will miss their cast or their production team, I don’t know how genuine that is every time it is said, but this time it is totally true. I didn’t want to leave the set or the people who were part of the project, and it also took me a while to get used to normal life again because recording with them was a really beautiful experience.(It may interest you: Do you have glasses? Hollywood is not your place in the world)

Samuel L. Jackson and Salma Hayek in the film.

What was the most difficult part of this shoot?

I remember that Salma and I, practically, we were soaked during the middle of the film because we spent it jumping rivers, puddles, oceans… This is a kind of trans-European adventure. There were a lot of stuntmen, a lot of hits and a lot of injuries, but all of that was part of the job and it was fun.

Tell us about your experience at the locations.

Filming in Croatia was special, not every day you have the opportunity to go to a country like that, immerse yourself in its culture and be able to share and spend time with its inhabitants. One of the greatest things about making a movie is being able to visit amazing places you’ve never been before. I had the opportunity to travel to Croatia with my whole family, and they loved it (Reynolds is married to fellow actress Blake Lively, with whom he has three daughters).(Also read: Emma Stone will be in the second part of ‘Cruella’)

What can the public expect from this second installment?

Hard to Care 2 follows the line of the first in a charming way. The sequels can be a very difficult thing to do because sometimes they just explode and reiterate what worked from the first parts. This movie doesn’t do that, what it does is highlight the tone and the essence by giving space to new and unbridled elements, making it a better story. On the other hand, Hard to care 2 was conceived from the beginning as an action comedy, unlike the first part, which had to be rethought and redirected shortly before filming began.