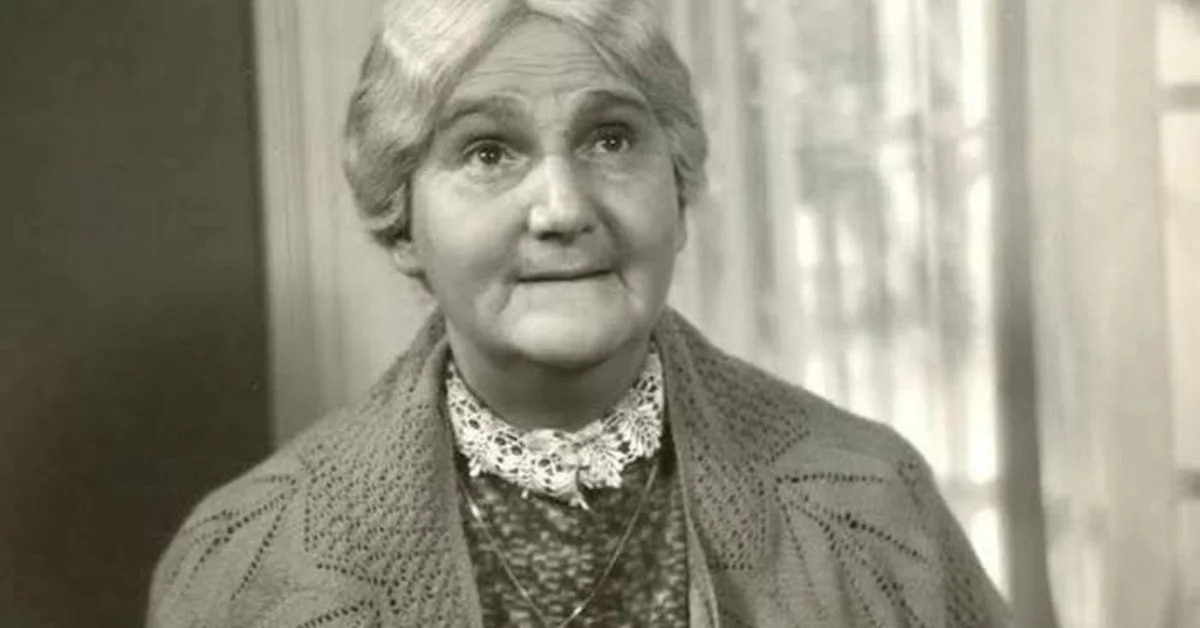 Sara garcia, who was characterized by being the eternal granny from the movies of the Golden era of Mexican cinema, she actually also enjoyed showing herself in some projects with her true image, without the hours of makeup and hairstyle on top.

The call Granny from mexico, Sara García, from before reaching the age of 50, she only did castings for roles of elderly women. Sometimes he painted all his hair whiteShe showed trouble walking and spoke as if she had missing teeth just to convince the public that she was a grandmother.

But before that, Garcia began his artistic career in his early 20s. He had a great affinity and sensitivity for artistic expressions, so in the film In self defense he had no problem standing out for his acting skills.

Sara became an actress when she was in her 20s. Her beginnings were on the screen, but she was passionate about the theater (Photo: Facebook / Legends of Customs and Traditions of Mexico)

Thanks to this tape, she was invited to the theater, where she worked for years. In this same environment, several myths about the leading actress were born; According to the press, Sara would have been chosen to star in the staging My grandmother the poor.

Due to her commitment to her work, the actress played her role in an unprecedented way, but she felt that something was missing for her audience to fully believe that she was a grandmother. Therefore, García would have removed part of your teeth, by then I had 39 years.

The myth also points out that, supposedly, when she was called to do the casting at age 45 for Out in the tropics, a film in which she would also have to be a grandmother, 14 teeth were removed, in addition, it would have made to fracture the knee to present real annoyances.

According to rumors, she would have had her teeth removed just to be the best granny in cinema without being of advanced age (Photo: Mexican Silent Cinema Site)

All of this was denied by Ana Martin, who assured that Sara, with whom he worked on almost a dozen tapes, would never have done that just for one movie. As the actress recalled, what her partner actually did was remove some teeth because she had had severe problems with her teeth.

The same oral disease forced her to remove those teeth that would no longer serve her, and once they were removed, she decided to take advantage of her natural appearance for the roles in which she had to play an older person.

Another of the most scandalous rumors of Sara’s youth was when it became known that, supposedly, she felt attraction to both men and women.

And is that the Mexican LGBTTTI Obituary and even the actor Manuel “Flaco” Ibáñez have assured that the actress had a loving relationship with Rosario Gonzalez since their youth, as they would have known each other as children when they were classmates in the Vizcaína school.

For most of their lives they were together; Rosario helped García make important decisions, advised her and supported her in everything. It was rumored that their close relationship would have led them to live together until the actress died.

On the other hand, one of the almost unknown aspects of the youth of the Granny from mexico, is that she married very young, in 1918, with Fernando Ibáñez and had a daughter, Fernanda mercedes, in 1920. However, the couple decided to separate, which is why a large part of Fernanda’s photos are only with her mother, and not with her two parents.

One of Sara’s greatest tragedies was when she lost her daughter Fernanda, just 20 years old (Photo: Facebook-Cine de Oro Mexicano)

Since the actress was the one who took care of the girl, Fernanda always accompanied her mother to theaters and recording sets, which encouraged her to also become an actress, participating as an extra in some productions.

One of the bigger tragedies from Sara it was precisely from Fernanda, because the young woman passed away at age 20 typhoid.

The film that brought Sara García and Juan Gabriel together
Taking out teeth and putting on makeup: what Sara García did to be the eternal grandmother of Mexico
Why Sara García had problems with Jorge Negrete and Pedro Infante

How Sara García looked when she was young