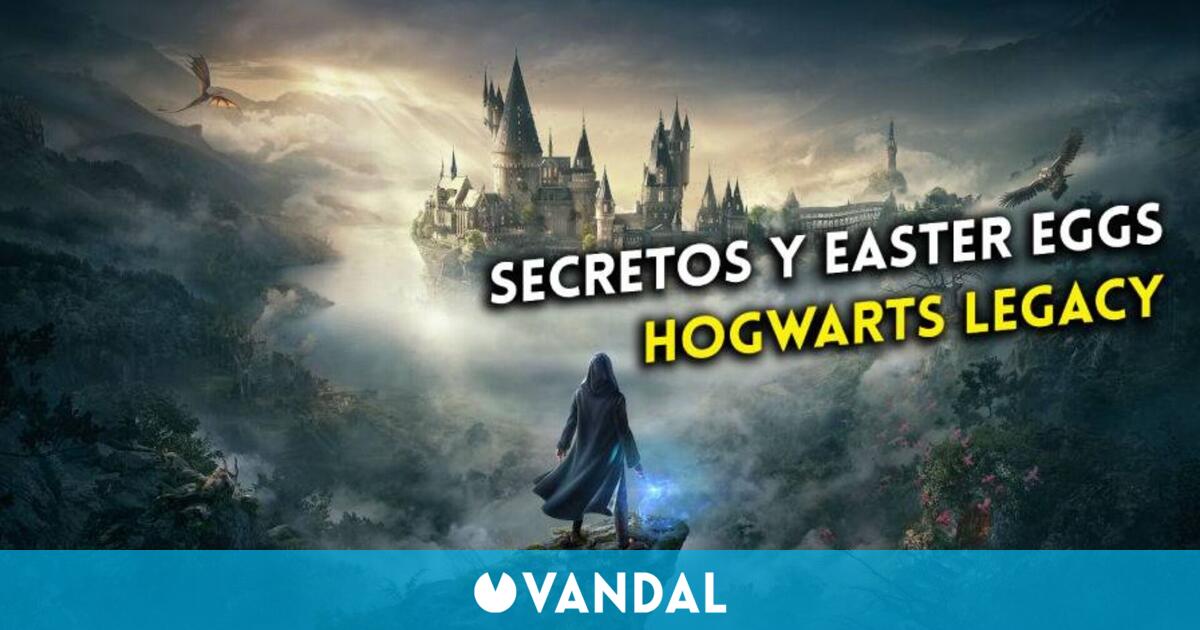 After a long wait and some rumors that pointed out that Hogwarts Legacy was going to be delayed until 2023, we can already take a look at what the new Avalanche title looks like, which is postulated as a must for Harry Potter fans. The universe devised by JK Rowling is one of the few that, to this day, is being exploited extremely little considering that has a thousand and one possibilities to be fodder for sequelsspin-off and multiple projects that delve into this magical story.

Avalanche throws himself into the mud in an ambitious work whose purpose is introduce players to Hogwarts itself, allowing them to create their own character to attend class, participate in Quidditch matches (or so it seems) and face terrifying creatures, as well as a good number of wizards and evil goblins. The trailer has served to see closely the mechanics and the infinite possibilities offered by the titlebut the footage seen from Hogwarts Legacy hides a good handful of easter eggssecrets and references to the Harry Potter saga that we will show you in this text.

If you miss something you can always leave it in the comments. The Harry Potter universe is huge and on Hogwarts Legacy there is a pure love for the saga of original books and movies. We have put those references in order of appearance in the footage that we have been able to see. our partner angel of the churchvideo game journalist, has made a thread on Twitter compiling many details of the trailer of Hogwarts Legacy that even for us went unnoticed, that has served us as a guide and source.

All the secrets, easter eggs and references

The centaurs of the forest

We were first able to see these beings in Harry Potter and the Philosopher’s Stone, and since then it has become clear that they do not want Hogwarts students to come near their territory, something that is clearly reflected in Hogwarts Legacy with a blunt: ‘What do you think you are doing here humans?‘. It is not known what role these mythological creatures would play in the story, but it is clear that they will offer extra content to the main story.

Dragons have always been part of Harry Potter, especially from the fourth installment, the goblet of fire. On Hogwarts Legacyas we can see, we will face these beasts. Let’s hope they are not as fierce as in the movies or that it does not take us as much effort as in the movies. God of War.

The goblins with their true nature

Goblins are now scary! Hogwarts Legacy has shown a squad of goblins who are truly evil incarnate. Just like it was done in shadow of mordor and shadow of war New characters have been created that refer to what was seen in the saga. In the title of Avalanche we will have to face these magical beings.

The Great Hall of Hogwarts, but a bit changed

We will of course have the Hogwarts Great Hall, but with some changes. if you look hourglasses no longer appear with the score of each house and the teachers’ table is a kind of Omega. Which heralds that major changes were made to the school prior to the arrival of Potter and company. 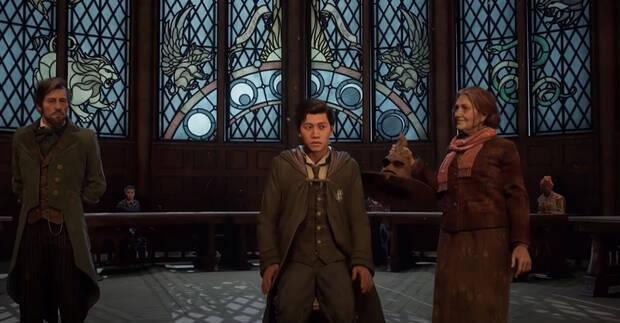 The Sorting Hat we saw in harry potter and the Philosopher’s Stone repeat role in this playdoing exactly the same as always: indicating which house our character belongs to. 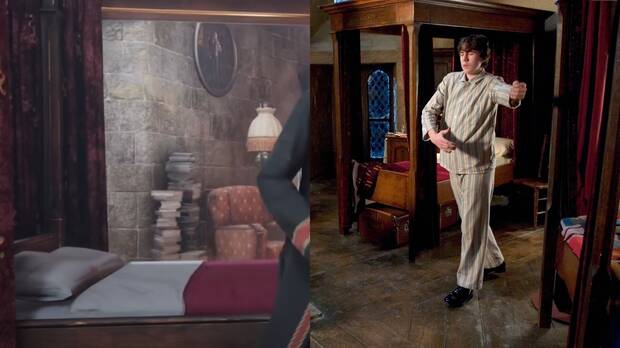 One of the most obvious things, but it has made us laugh how accurate are the bedrooms in this particular housewhich is generally the one we spend the most time with in the entire Harry Potter saga.

Common rooms of all houses 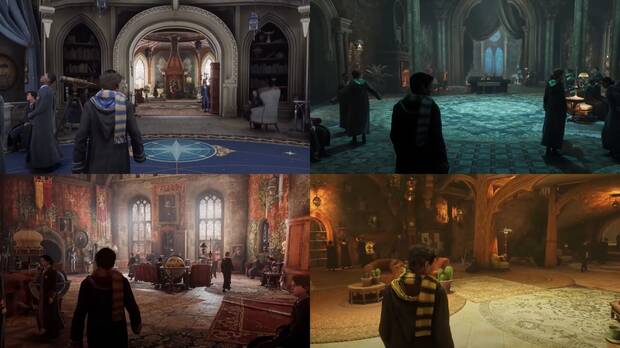 It’s funny, but Hogwarts Legacy It has allowed us to take a look at each and every one of the common rooms of the houses of the school in which Merlin was formed. the of Griffindor we had a little view, and the slytherins we can roughly imagine what it would be like in detail (darker, colder, even sinister), but the Hufflepuff and ravenclaw were unknown to date. The former looks more like a burrow, sporting a yellow hue. While Ravenclaw, on the other hand, focuses on astronomy and bluish colors. 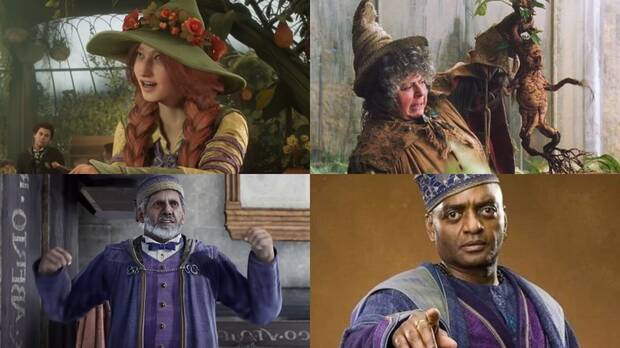 For now a deep look at the teaching staff has not been taken, being the classes of potions, herbology and enchantments the subjects that have looked the most on stage in this short trailer. As you can see, some of the teachers’ costumes make a clear reference to how other teachers and wizards looked in the Harry Potter saga, being Kingsley Shacklebolt (Minister of magic) the most conspicuous.

The case of the potions teacher… It’s very Snape! 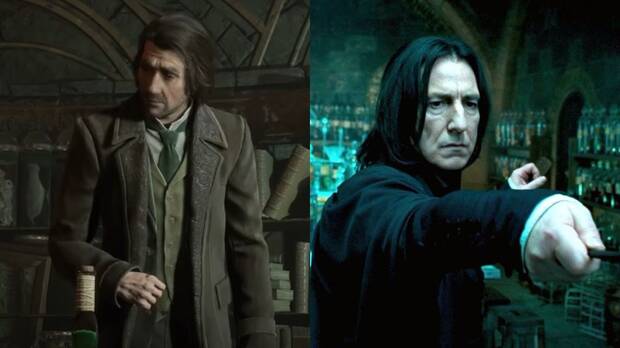 The Hogwarts Legacy Potions Professor looks like a fusion between Snape and Remus Lupin. Dark, with a fixation on the complexity of potions and a look that clearly ties the two characters together. For now, he is our favorite of Hogwarts Legacy.

The classic duel between Griffindor and Slytherin

It is clear that the confrontation between students that was going to be shown was between the houses of Griffindor and Slytherin. This is a reference to Harry Potter and the Chamber of Secrets, where Harry gets up close and personal with Malfoy. after a lousy performance (we don’t mean acting) by Gilderoy Lockhart.

The skeleton of the Defense Against the Dark Arts class 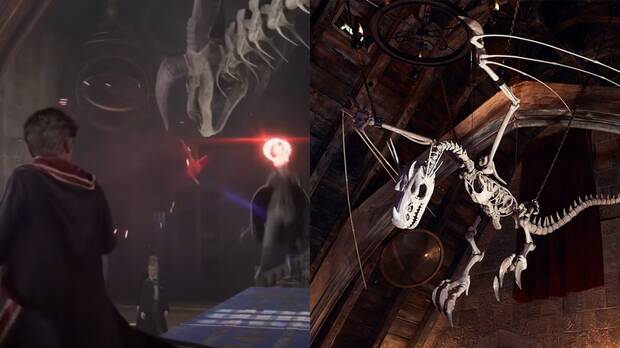 The mythical skeleton that we have seen in various Harry Potter films also appears, confirming that it’s been a long time. Details about its origin may be given in this installment.

The Fat Lady has already appeared 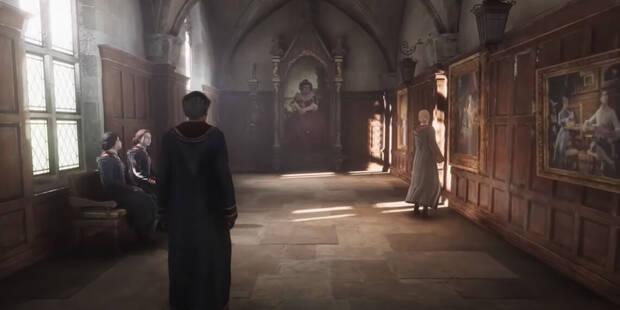 First seen in harry potter and the Philosopher’s Stone, this Fat Lady is the guardian of the tower of Griffindor. I interpreted it at the time Elizabeth Spriggslater Dawn French I picked up your witness.

Quidditch uniforms confirmed. And you see the stadium! 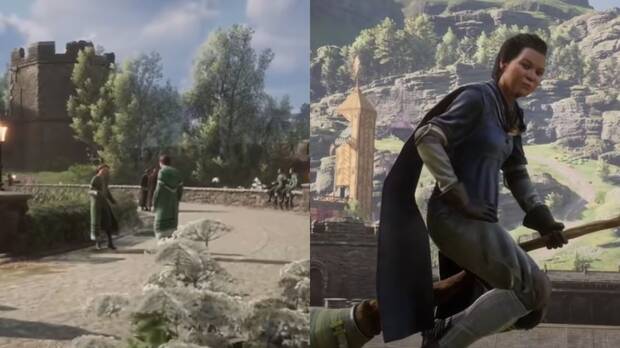 In one of the fragments, as you can see, you can see the Slytherin house uniform in the distance and, later, the Ravenclaw house appears wearing its look in this sport. You can also see the stadiumso it is practically confirmed that we will be able to play matches. 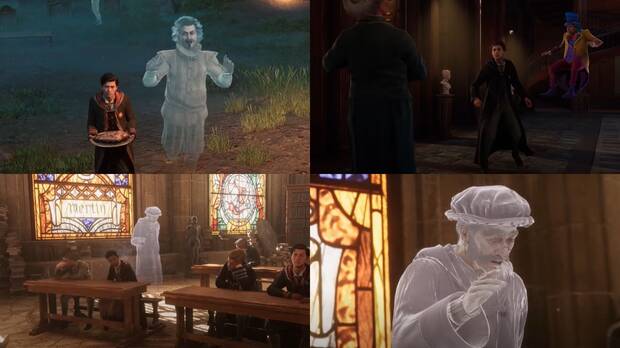 One of the best elements of Hogwarts Legacy is the appearance of all kinds of ghosts and historical characters, such as Merlin. We were already able to meet Nearly Headless Nick in Harry Potter and the Philosopher’s Stone, and in the installment of Avalanche we will be able to see Professor Binns (who died in the same school and continued teaching) in the foreground. Peevesa poltergeist that was originally going to be part of the film saga, but was scrapped.

Salazar Slytherin and the Chamber of Secrets 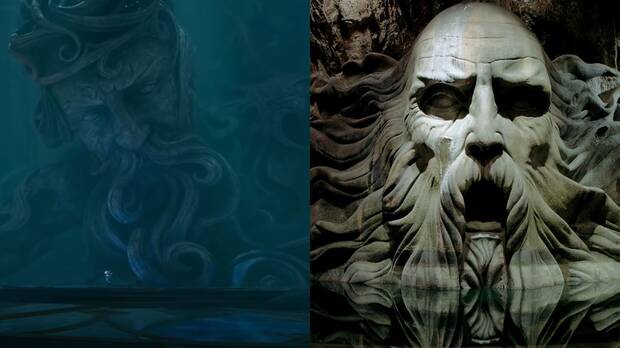 In the sample video you can see that the main character approaches a great monument that reminds us of the terrifying Salazar Slytherin, father of the house of the serpent. It is possible that the secret chamber and other mysteries will come into play in Hogwarts Legacy.

The usual diary that we can find in Harry Potter, with the vignettes moving, can also be found in the footage. This time the protagonist is being informed of the dangerous goblin that is stalking the magical world, and that we have left you above in this same text.

The Devil’s Lasso and the pawns

If you remember the final stretch of harry potter and the Philosopher’s Stone (which will have a significant weight in this installment seeing the references) the protagonists run into the devil’s snare, a magical plant that strangles everything that falls into its claws. In addition, on the sides, we see the pawns of the chessboard that also belongs to the third act of The Philosopher’s Stone. We do not know what role these elements will playbut it is clear that we will pass through there before, in theory, Harry Potter does.

A thousand and one spells! From Expeliarmus and Avada Kedabra, to Petrifucus Totalus, Incendio, Accio, Reparo and more 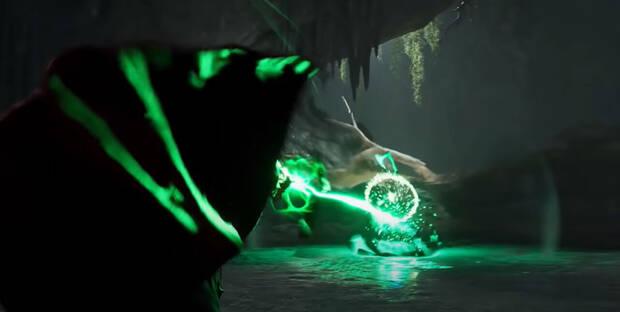 In the gameplay you can see multiple spells and spells cast on the battlefield. Hogwarts Legacy The action sequences have been taken very seriously and it seems that we will be able to carry out very complete battles with a very wide spectrum of options to finish off our enemies. Almost any attack that we have seen in Harry Potter be present And that’s just good news.

Nifflers, Thestral and other creatures 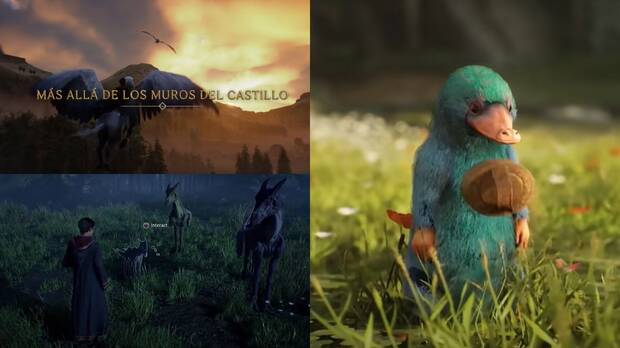 direct reference to Fantastic Beasts and where to find them with the appearance of the Nifflers (the creature on the right). The one on the left, the Thestral, indicates that our character would have been close to death if we follow what we have learned from our dear friend Luna in the main saga. Hippogriffs can also be seen on a couple of occasions, or at least it gives the impression that they are those creatures. We will be able to fly around Hogwarts on mounts as well as with our broom.

One of the most emblematic stations of Harry Potter that it seems that we can also visit in Hogwarts Legacy. Exploration is the order of the day and it is clear that we will lack hands to be able to enjoy every last corner of this impressive adventure. 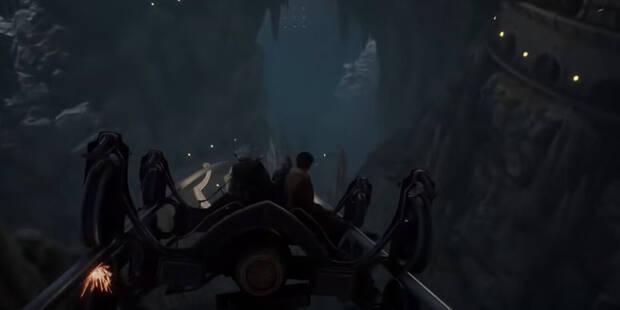 One of the latest references is the appearance of the Gringotts chambers. Although really, as such, it’s no secret because the location where the protagonists are is more than evident. What tasks shall we perform in those dark chambers?

Hogwarts Legacy: All the references, winks and easter eggs of the new trailer