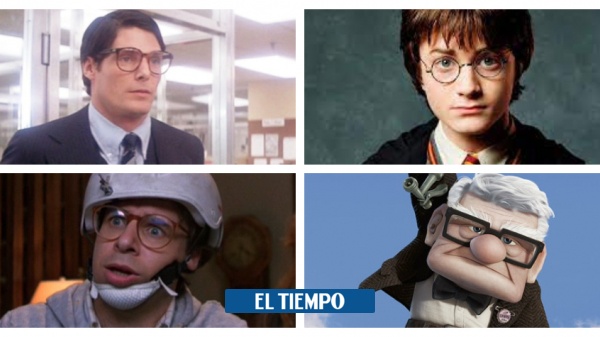 Having glasses in the cinema is a condemnation; for the seventh art the characters who use them have the role of nerds, victims or losers. Superman It is camouflaged in the glasses of Clark Kent: every time he takes them off he stops being clumsy and can even see the forbidden – with his brand new X-ray vision – underneath her blouse. Lois Lane.

(Can read: Cameron Diaz reveals why he retired from cinema).

In ‘Jurassic Park’ the evil fat man who sells the secrets of dinosaurs loses his glasses in a tropical downpour and ends up blind and in the jaws of a T Rex. On ‘Naked los angeles‘Detective Edmund Jennings (Guy Pearce) gets a reprimand from his colleagues for wearing them, detective and with glasses? What kind of cop can take on a gang of gangsters with glasses? Jennings, in one of the few claims of the men with glasses (not without first making fun of him and not making it clear that he is the only cretin in that universe of tough men), laughs last.

Lynda Carter who played Wonder Woman on the television series.

On ‘Strangers on a train‘, one of the classics of Hitchcook, the murderer gives himself away by the image that remains of his victim’s glasses. In that film, by the way, there is a fierce stereotype of women with glasses: nerdy, with baggy dresses and a sappy hairstyle.

The Wonder Woman it is not saved from the stereotype either. Lynda Carter he concealed his identity with glasses larger than his face. In “Wonder Woman 1984”, Gal Gadot does not wear hideous glasses, but the one who will become his arch nemesis, Dr. Barbara Ann Minerva (Cheetah), does. And one of his reasons for hating Princess Diana is that she is sophisticated, has long legs and, of course, does not wear glasses. Michelle Pfeiffer, in the skin of Selina KyleHe had a silly face with huge glasses, but he found his redemption in the skin of Gatubela and “Batman Returns,” the Tim Burton.

Evil is also camouflaged behind bottle-bottomed glasses. On ‘The day of the jackal’by Fred Zinnemann, the ferocious murderer who wants to end the life of Charles de Gaulle, disguises himself with heavy black-framed glasses and poses as a Danish professor.

The impudence of Jeff Bridges in ‘The Big Lebowski’.

Dark glasses, on the other hand, have another symbolism. Tom Cruise’s aviator Ray Bans in ‘Top Gun’ They are a classic of popular culture; being an F-16 pilot, without your goggles, wouldn’t make any sense. The Vuarnet 03 of Jeff Bridges, en ‘The Big Lebowski’They gave a new north to drinking, laziness and being tucked into a pajama robe all day. In another era Steve McQueen He was the ‘coolest’ man on the planet not only because of his skill with his motorcycles, but also because of his dark Persols in ‘The Secret of Thomas Crown’. The great Johnny Depp got to see Hunter S. Thompson’s psychedelic demons in ‘Fear and Loathing in Las Vegas’ thanks to a suitcase full of drugs and his Ray Ban with yellow lenses, and the tremendous Al Pacino gave an air of his mafia madness in ‘Scarface’ with his cute Farrow 6031. And Neo -the handsome Keanu Reeves- would not have been the same ‘chosen one’ in the saga of ‘The Matrix’, de las Wachowski, without his black leather overcoat and dark glasses; Nor could Laurence Fishburne, like the impassive Morpheus, have been able to guide him the same way without his futuristic round, legless glasses.

(We suggest: ‘Don’t breathe 2’: suspense with explicit violence and action)

Glasses are also part of the mad scientist look. And an infallible formula to ridicule them. In ‘The Nutty Professor’, Jerry Lewis He marks his character with his clumsiness, hideous teeth without braces, a cartoon bowtie and, of course, heavy bottle-butt glasses that he drops to the tip of his nose. The film is a free version of ‘The Strange Case of Dr. Jekill and Mr. Hide’, by Robert Louis Stevenson, only, instead of becoming a monster with the potion that comes out of his laboratory, the disastrous scientist becomes the handsome Buddy Love.

Another scientist with glasses is Wayne Szalinski (Rick Moranis) in the saga ‘Honey, I Shrunk the Kids‘. This time the figure of the scientist not only has glasses, is clumsy and excessively candid, but, to potentiate the parody, is short. And, along the same lines, glasses and short stature, the Doctor Armin Zola (Toby Jones), one of Captain America’s enemies in the universe of Marvel.

Judge Doom, in ‘Who Framed Roger Rabbit?’, deserves a special mention: his comic book character identity is only exposed when he takes off his round dark glasses and his deranged cartoon eyes come out. That crazy look, without having to take off his glasses, is only comparable to that of another crazy scientist: the one who interprets Peter Sellers en ‘Dr. Strangelove’, de Stanley Kubrick, the former Nazi in the service of the United States during the Cold War, who proclaims in the Pentagon the destruction of the world and the Russians with a precious atomic bomb.

(Also: The story behind the vueltiao hat and backpack from ‘Encanto’)

Ridley Scott, of course, also put glasses on Dr. Eldon Tyrell (Joe Turkell), the creator of the replicants in ‘Blade Runner’, but in his case, his look is not that of an unbalanced, but that of a guy satisfied with his creation. It is the gaze of a god who is above good and evil and looks condescendingly at other mortals. His glasses are not thick or old fashion: they are the size of welding glasses.

The beginning of the century brought one of the most iconic glasses in cinema: in 2001 it made its appearance Harry Potter, the famous Hogwarts wizard who jumped from literature to film, in both fields with astronomical gains. Round, black-framed, are part of his powers: every time he loses them the young sorcerer is left with a completely blurred vision of the world. His glasses seal the personality and aesthetics that the writer gave him JK Rowling So what Daniel Radcliffe broadcast on the screen.

Great personalities in world history wore glasses, all with a particular stamp: John Lennon, Steve Jobs, Stephen Hawking y Winston Churchill They have been the protagonists of several biopics in which their lenses are as important as they are.

Behind the scenes there are also iconic glasses: directors like Woody Allen, Martin Scorsese, Spike Lee, David Cronenberg o Guillermo del Toro, They wouldn’t be the same if they were taken off during a shoot or on the red carpet at an awards show.

Hollywood He has also put spectacles on spectators. In the 1950s, after several unsuccessful attempts, the first furor for the 3D with the B movies. There was a little rebirth in the 70s and 80s, especially with ‘Shark 3‘, in 1983, and in the 21st century, blue and red glasses returned to everyone’s face with ‘Avatar‘ (2009).

Mirabel, from the animated film ‘Encanto’, is the first Disney princess to wear glasses.

In animated films, glasses also have their history. The grumpy and lonely old man from ‘Up‘, Carl Fredricksen, uses them to see the photos of his wife who is no longer there; Edna Moda needs them to design the fantastic outfits of ‘The Incredibles’; Sadness, the blue emotion of ‘Inside Out’ (‘IntensaMente’) he wears them to make his feelings more bearable, and soon Mirabel, the endearing protagonist of ‘Charm‘–The movie that Disney produced inspired by Colombia– will become the first princess in the studio to wear glasses. Perhaps the vindication of the glasses is on the way.