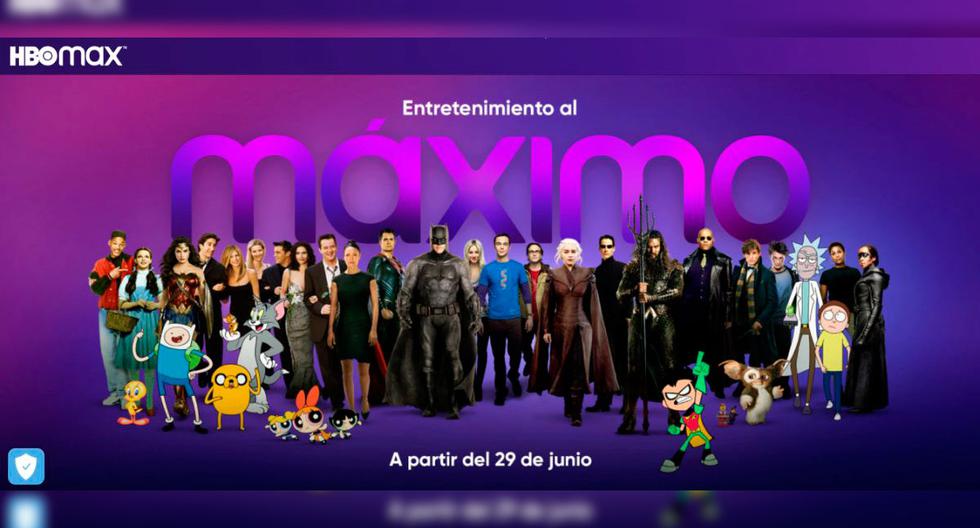 After months of waiting HBO Max finally reaches Latin America; The launch date is scheduled for this Wednesday, June 29. In this way, the WarnerMedia streaming service is getting ready for a worldwide expansion that will compete with the giants of the industry.

MORE INFORMATION: What will happen to my HBO Go subscription if I want HBO Max

Currently, the US platform has 17.2 million subscribers and the strategy it will use to attract more followers will be the premiere of 17 films in theaters and on HBO Max at the same time, among which the cut of “Zack Snyder from Justice League “,”Godzilla vs. Kong“,” Mortal Kombat “,” Dune “and”The Matrix 4”.

What’s more, will have the return of great titles such as “Game Of Thrones”, “Friends”, “Harry Potter”, “The Lord of the Rings”, “The Big Bang Theory”, “Two and a Half Men” and many more classics. In addition to this, will show his own productions such as “The Undoing”, “Euphoria”, “Watchmen” and “Tenet”, as well as the prequel to “GOT” and “House of the Dragon.”

MORE INFORMATION: Catalog of series and films of HBO Max for Latin America

However, one of the proposals that attracts the most attention is that will show WarnerBros films only 35 days after their theatrical release, at no additional cost. For this and more, we let you know everything you need to know about the arrival of HBO Max in Latin America.

WHEN DOES HBO MAX ARRIVE IN LATIN AMERICA?

HBO Max will be launched this Tuesday, June 29, simultaneously in 39 countries of Latin America and the Caribbean. It should be noted that it will have the same content from the United States, which includes the parallel premiere of Warner films both in theaters and on the streaming service.

HBO Max will offer two monthly subscription plans: standard and mobile; In addition, it will offer a trial period of seven days and a so-called “tasting area” at no cost where you can enjoy series and documentaries.

– You can enjoy HBO Max on all your screens.

– You will have access on three devices at the same time.

– You will be able to download your favorite series and movies to see them wherever and whenever you want.

– You can enjoy HBO Max on tablets and mobile phones.

– You can only access one device at a time.

– Playback will be in standard definition.

– You will be able to download your favorite series and movies to see them wherever and whenever you want.

PRICE PER COUNTRY FOR ONE MONTH

If you want to know everything about the payments for a month, CLICK HERE.

If you want to know everything about the payments for a month, CLICK HERE.

PRICE PER COUNTRY FOR THREE MONTHS

If you want to know everything about payments for three months, CLICK HERE.

If you want to know everything about payments for three months, CLICK HERE.

PRICE PER COUNTRY PER TWELVE MONTHS

If you want to know everything about payments for twelve months, CLICK HERE.

If you want to know everything about payments for twelve months, CLICK HERE.

To subscribe to HBO Max, the platform must be available; In other words, as of June 29, you can start experiencing emotions to the fullest with the iconic content that it brings.

In case you don’t want to miss out on anything, register your email by going to HBOMax.com to be aware.

MORE INFORMATION: Everything that was told and revealed in the special chapter of “Friends: The Reunion”

HBO Max is a completely new platform. If you enter from your mobile device you will have to download the HBO Max application and if you enter HBO GO from your computer, the platform will redirect you to HBOMax.com to complete the process.

MORE INFORMATION: This was Paul Rudd’s cameo in “Friends: The Reunion”, the HBO Max special

WHAT CAN YOU SEE ON HBO MAX?

HBO MAX was launched in May 2020 in the United States and is already a reality in many parts of the world. Currently the platform has 17.2 million subscribers and Warner’s strategy to grow it is very bold: it will release 17 films in theaters and on HBO Max at the same time. Among them are Zack Snyder’s cut from Justice League, Godzilla vs. Kong, Mortal Kombat, Dune, and The Matrix 4.

The streaming service would feature more than 10,000 hours of content, including 31 original productions and 38 HBO series in its first year, and WarnerMedia plans to add 50 new titles by the second year.

MORE INFORMATION: Why “Zack Snyder’s Justice League” Was a Flop for HBO Max

CATALOG OF FILMS AND SERIES ON HBO MAX

Here is the complete list of series and movies that HBO Max Latin America will have.

Judas and the Black Messiah

Those Who Wish Me Dead

The Conjuring: The Devil Made Me Do It

The Many Saints of Newark

Dr. Strangelove, or How I Learned to Stop Worrying and Love the Bomb (1964)