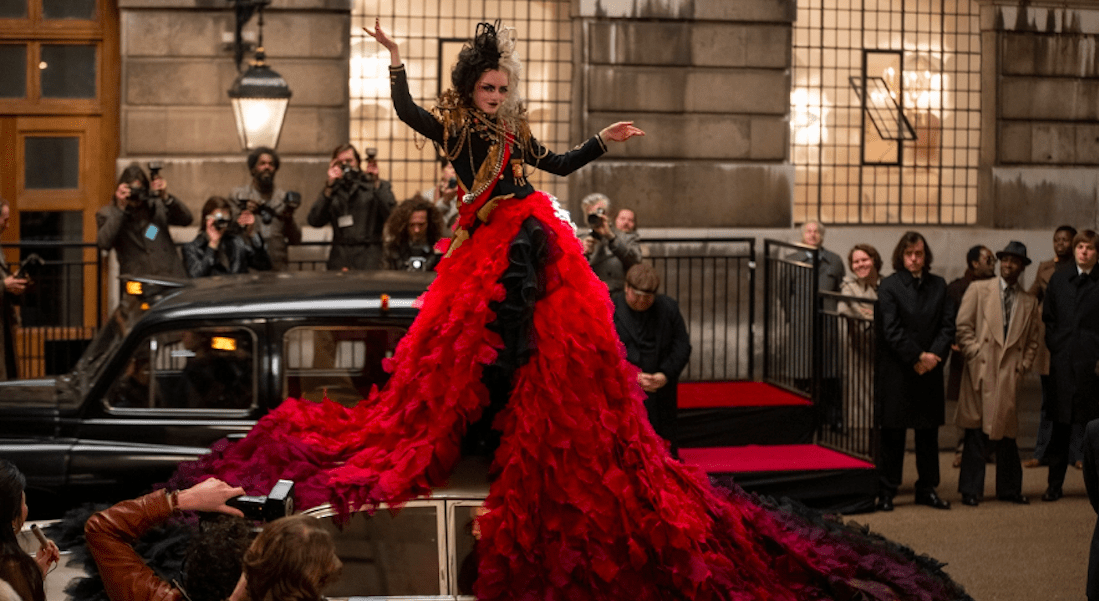 It is to be expected that a film focused on Cruella de Vil, ruthless designer extraordinary, have complete mastery in the technical sections. Production, costume, makeup and hairstyle design; everything is carefully thought out. It is not only a way to set the London of the 70s, it is also a way to add to the characterization of the characters. On CruellaPerhaps even more so than in another Disney movie about different settings, the design and details tell the story.

In the production of the tape, the official count was 96 sets, although the production had to dress 130 sets if we count the changes between scenes. It was filmed at Shepperton Studios, on the outskirts of London, as well as on various UK locations. Fiona crombie, an Oscar-nominated production designer for her work on The favourite, shares that the most challenging thing was the number of sets. It is, without a doubt, his biggest project to date.

“The favourite we did it mostly in one place, so even though at the time I probably thought ‘this is so hard’, in hindsight it was like a walk in the park [ríe]”.

Since the production design had to be based on history and a coherent aesthetic, collaboration between departments was essential. Fiona particularly highlights the work with Jenny beavan, the costume designer, whose credits also include films such as The king’s speech Y Mad Max: Fury Road. “Jenny was downstairs and I went with colors to see what she was doing. Because one of the most important things for our departments was finding the design language of Cruella and the Baroness. They had to have real design skills, so I had to put that in their environments and Jenny had to put it in her clothes. “

You don’t have to look any further to appreciate the work done by Crombie and his team than in the spaces designed specifically for Cruella / Estella, embodied in live action by Emma Stone, and for the Baroness, the relentless figure of fashion played by Emma Thompson. For starters, both spaces are filmed in different formats: Cruella’s world is in 35mm, with more grain, to give her that rebellious and dirty 70s feel. The Baroness spaces, on the other hand, are filmed in 65mm, to give it a cleaner and more formal quality, with much more rigid lines.

The change in format not only affects the characterization of both, but also modifies the approach of the technical departments, since 65mm captures much more information. Attention to detail has to be even more careful. “What I really enjoyed doing The House of Baroness, their haute couture house, is that we could be very precise. There is something very organized and thorough about the way the tables are set, for example. Everything fits. Every chair, every lamp, every table ordered to be made; everything corresponds in a very precise way. There is a lot of control and order, ”says Fiona.

The House of Baroness is influenced by the spaces of Christian Dior, Yves Saint Laurent and Galliano. His clothes are inspired by himself Dior, as well as Balenciaga, Givenchy and Mary Quant. The intention was to reflect the controlling and assertive nature of Thompson’s character, as he begins to lose control and go out of style. “There is nothing in that room that she does not know is there,” says the decorator Alice felton. It also has a color palette with a green base, which fits with the brown and gold tones that the Baroness uses in her wardrobe and contrasts with the red of Estella’s hair, who does not quite fit into the space. It is the perfect union of all departments. “From the upper floor she dominates this realm, it is her domain. It’s a very intense atmosphere ”, complements Fiona Crombie.

On the opposite side in terms of design is Estella / Cruella’s lair, inspired by the spaces of Alexander McQueen, with papers on the floor and a much more relaxed and improvised atmosphere. Cruella’s clothes precisely drink from that movement, much less rigid and more adventurous, of designers like McQueen and Vivienne Westwood. For Fiona, this was the hardest set to conceptualize.

“I say that because that was a very delicate set. It should be a set in which children can feel comfortable, can grow and make it their own version of a family home. It was a very character-driven set. We had to think about who they are Jasper, Horace and Estella, what do we put in that environment to tell the story of these people and how they work as a family unit ”.

Once the spaces for each of the players in the story are ready, we go to the battlefield where they face each other. The big balls are a meeting point to develop the conflict between Cruella and the Baroness. “From a logistics point of view, [el set más desafiante] It was the great ballroom. That was a giant set, made from individually hand painted tiles, it took months to build, months to even make the floor tiles. You start to worry and ask ‘Did I choose the colors well?’ [ríe]. I remember thinking ‘this is my Disney ballroom, it’s going to be amazing’, but it also has to be real, you have to believe it. “

On Cruella, the name of the game was “attention to detail.” Details that jump from the screen, but also that contribute to the story that is being told. “We spent a lot of time making sure the details were correct: that everything is from the exact season, that all the cottons are correct; I have a team of wonderful people who even found old pens, so that the colors they are using in their drawings are right for the time. That’s part of the pleasure, looking for the little things, ”Crombie ends.

Sebastian Valencia Passionate about animation and romance movies. My favorite director is David Fincher. And I like rap.