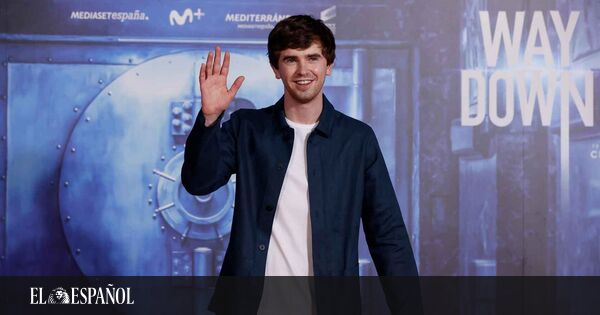 He was 12 years old when his blue eyes and puffed ears stole everyone’s heart. A child who ate the scenes in bites and made himself pale Johnny Depp on Discovering Neverland. The cinema discovered Freddie Highmore, and did not want to let it escape. That movie and that performance made him the fashionable kid. Charlie and the Chocolate Factory, Arthur and the Minimoys, The Spiderwick Chronicles… any family movie had that young British man as the main character. No one doubted that he would be the new child star. A dangerous label with a scary legacy.

But Freddie Highmore decided he didn’t want to take the easy way out. Overnight, the child star disappeared. He returned years later, already turned into a young man who kept that innocence in his face and who joined the difficult challenge of making a Norman Bates before becoming the villain of Psychosis. His role in the series Bates Motel It was his return to an industry from which he preferred to take a break to be a normal boy. More than normal, what it really is is a box of surprises. He studied Hispanic Philology at Cambridge, He speaks five languages, plans to direct, lived in our country for a while… And on top of that, he’s a lovely guy.

Now premieres Way Down, a Telecinco superproduction that has been stored in a drawer for a year because of the covid and that arrives this Friday in theaters ready to wake up a sleepy box office. A very entertaining and playful thriller directed by Jaume Balagueró where Highmore plays an engineering genius who is recruited for an impossible hit: rob the Bank of Spain. There is only one opportunity to do so, to do it in the final of the World Cup in South Africa, which the national team won in 2010. A film with a match rhythm of football, extra time and Iniesta goal included.


Highmore takes a break from filming The Good Doctor, the series that bursts audiences right now, and is planted in Madrid for an intensive day of promotion that coincides with the Almudena Festival, so he apologizes to the journalists and thanks them for coming. He also decides to respond in Spanish, “I have to practice.” A friendliness and closeness increasingly rare in the promotional worlds of international stars.

Way Down it seemed written for him. “There was a connection with Tom in that he is at a crossroads in the beginning. He doesn’t know what to do with his life, and I think we all identify with that moment of finishing school and making decisions for ourselves instead of doing what someone tells you to do ”, Freddie Highmore tells EL ESPAÑOL. But beyond that vital connection, there were others much more obvious.

“In 2010 I was here, in Spain, during the World Cup. Not in the final, but I was there when the national team returned to celebrate it, so there are many things about this film that are like reliving my Spanish times, my youth … well, I am still young, my youth in Spain “, he says and adds a Data that already sounds like a prophecy, the interviews he is conducting at the headquarters of Sony, the film’s distributor, are in the same office building where he did an internship at a law firm in 2012.

It is true that the two are different references, which are out of the ordinary in terms of how they represent another masculinity. They are not superheroes, they are not alpha men, and I like that

As if that were not enough, he is also a football fan, “so I could pretend, I was really living the experiences of the Spanish team as if I were Spanish, because with England we have not done well at all,” he laughs and acknowledges that “I would have liked to play football professionally, but it wasn’t for me ”. His team? Arsenal, of which they have a subscription and with which they remember the 2006 Champions League final when their team lost to Barça: “I was there and I cried a lot.”

Highmore have no problem talking about what made him decide to study instead of being a star, and he believes that his mother was an actor representative, but especially “having been in London” influenced it. “There was a certain distance from Hollywood and Los Angeles, and there was a life. I have had incredible opportunities, but I had my normal life in London, I went to school, and going to University seemed like the normal thing and the normal process. I identified more with the student who had the opportunity to go to college with his friends rather than something else. And I wanted it to be an active decision. Act like an adult. I didn’t want to continue what I was doing as a child and now, at 29 years old, I say, ‘Oh, I could have done something else but I didn’t have the opportunity.’ I’m not a lawyer, but I have the opportunity, ”he says frankly.

Many will think that between his character of The good doctor and that of Way Down there are many things in common. Two intelligent, dreamy and somewhat naive characters, but Freddie Highmore assures that he always wants to “do different things, because if it weren’t boring for people, to always see myself in the same character. “I think there are enough differences between the characters, but it is true that the two are different references, that they go out of the ordinary in terms of how they represent another masculinity. They are not superheroes, they are not alpha men, and I like that. I liked making a movie in which the main character is not James Bond, which I love, but this is something else, “he explains.

In the choice of his roles there is always a reason, something that goes beyond “the narrative”, and in Way Down he liked that making a thriller like this was “a celebration of European cinema, and more specifically of Spanish cinema. Many thrillers or action movies are the American model that works very well and I like it, but this is doing it in a different way, celebrating our identity as Europeans and showing that we can do our version of these types of films.

Freddie Highmore, the actor who preferred “to go to college with friends” to succeed in Hollywood